There are five ghost pirate ships drifting on an infinite ocean in the spiritual realm. Each ship moves at a constant speed and never changes direction. No two ships are traveling in parallel paths.

These ships have been drifting for a very long time. In fact, time extends infinitely both to the future and the past, and these ships have drifted for all of history.

Because they are ghosts, two pirate ships can pass right through one another. However, such collisions release a huge amount of spiritual energy. For every pair of ships that collide, one trillion souls are destroyed. Since the there are only 10 trillion souls in the universe, these ships could destroy all life if every pair of them collided!

Eight pairs of ships have already collided: are the 2 trillion remaining souls doomed?

Think of the ships as point masses. If 4 ships meet at the same time, this would destroy 6 million souls, since 6 pairs of ships collided.

no, it is possible that the 2 trillion remaining souls will survive.

We can view the path of a pirate ship as a line in three-dimensional space (where the first two dimensions are spacial dimensions along the ocean, and the third dimension is time). Two pirate ships collide if and only if the corresponding lines intersect.

The given question is equivalent to:

The benefit of the equivalent question is that it is easier to visualize a counterexample. Consider a tetrahedron with one edge removed. This figure has five edges, which can be extended into five lines. We can count that exactly eight pairs of these lines intersect. 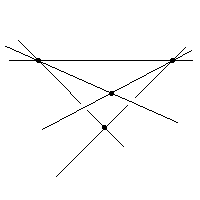 Not very mathematical I know, but is this wrong?

No they're not doomed.

time extends infinitely both to the future and the past, and these ships have drifted for all of history

12
How to ship the new Slurm 7-pack efficiently