Decipher the location of the pirate treasure

Long ago, the pirate ship Wild Goose, led by Captain Oliver, sailed the coast of Nova Scotia. One night, according to legend, the Wild Goose was caught in a storm. Before she sank, Captain Oliver had the ship's stash of treasure put into a life raft. The surviving crew members steered the raft to the nearby Brier Island, and hid the treasure there.

You, a world famous treasure hunter, are headed to Brier Island in search of the lost treasure. When you arrive on the island, there is no trace of the treasure. You do however find a journal which is clearly very old. Most of the pages are too faded to read, but one of them contains some mysterious writing: 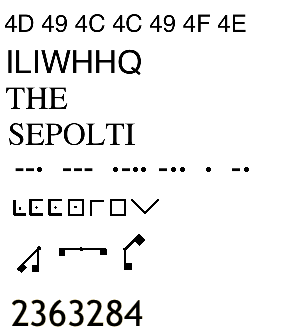 What is the treasure, and where is it hidden?

This really is an addendum to Quark's answer, which has all the individual words deciphered. As commented by Julian, there is still one word missing and Quark's word order is not correct.

I think the correct word order is:

Fifteen million golden loonies are buried beneath the ...

where ... is the missing word. That word can be found

by taking the first letters of the encodings used for each word in the order of the final sentence. The encodings are the Caesar cipher, ASCII, Morse code, the Pigpen cipher, the Semaphore alphabet, Italian, the Telephone keypad and plain English.

So the complete hint for the location of the treasure is:

Fifteen million golden loonies are buried beneath the campsite.

Referring to this link (https://en.wikipedia.org/wiki/Brier_Island), Brier Island is actually in western Nova Scotia (which is part of Canada, never knew that before). Being in Canada, it makes sense that the coins are loonies (https://en.wikipedia.org/wiki/Loonie). According to the first wiki page, Brier Island is well known for their ship wrecks.

With all of this making up an accurate story so far, it's possible Wild Goose and Captain Oliver have some special meaning.

It may be a coincidence but there is a Geocache hidden in Oliver's cove on Brier's Island (http://www.geocaching.com/geocache/GC13ACV_olivers-cove-brier-island-series?guid=72a041dd-752a-4c0a-8bff-bbb0adf65f3c). I would go there myself to dig and check if there are any golden loonies but it may be a wild goose chase. heh.

Here's a potential answer (unsure of the last one):

The codes are as follows:

(4) SEPOLTI is Italian for buried

(5) The morse code translates to "golden"

(6) The icons are pigpen (https://en.wikipedia.org/wiki/Pigpen_cipher), this translates to "loonies"

(7) The symbols are flag symbols (https://en.wikipedia.org/wiki/Flag_semaphore) that translate to "are"

(8) 2363284
This is the one I'm unsure of, how can a 7 digit number be translated to a word? If this was a modern day puzzle, then I'd immediately think of a cell phone number. If you type it out, it does spell "beneath"(http://phonespell.org/combo.cgi?n=2363284). It doesn't mean anything meaningful in any bases (base 36 is 1ENIS), it can't be broken up and converted to letters in any way, and I don't see any references online. Maybe "long ago" isn't so long?

Final answer when unscrambled:
The fifteen million golden loonies are buried beneath. (yes I know, anticlimactic)

There is no treasure.

Loonies are a Canadian coin introduced in 1987, certainly long after the supposed ship wreck. This is, indeed, a wild goose chase.

fifteen million golden loonies, and it is buried beneath the campsite.

Each line in the journal entry is a word.

This is encoded in ASCII. The text reads 'MILLION'.

This is encoded with a Caesar cipher. Shifting each letter three places back in the alphabet gives 'FIFTEEN'.

This is simply the English word 'THE'.

This is the Italian for 'BURIED'.

This is Morse code for 'GOLDEN'.

This is a Pigpen cipher. The text reads 'LOONIES'.

This is flag semaphor. The text reads 'ARE'.

When these numbers are entered on a phone keypad using T9 predictive text, the result is 'BENEATH'.

We can rearrange these words to get

FIFTEEN MILLION GOLDEN LOONIES ARE BURIED BENEATH THE...

There is a word missing, which would tell us what the golden loonies are buried beneath.

The initial letters of the code names spell the final word of the message: 'CAMPSITE'.