One day, a colleague from the office hands you the following message without a comment and makes a quick retreat out of your cubicle. Can you make head & tails from this? What is your colleague trying to tell you here?

The solution to this puzzle is an English sentence and this is not a rebus puzzle. Hints will follow if the message is not deciphered in due time.

The first line is part of the code instruction, the second line is a self-verification step: If you can make the number on the left represent a G you have probably found the code algorithm and can apply it to the 3rd line, which is the message.

"G" does not represent anything but the letter G itself.

You did miss it at first, but the paper slip has been very carefully punctuated with a needle on the right edge. It seems that two different needles have been used too...

Okay, so first I

With this it was obvious

Then, I tried out the example with a small pyramid and realized that:

if I "dropped" the binary in, in order from most significant bit to least, I would get this:

Drop each bit in from the top. They fall straight down; if the space directly under them is full they go down and right, and if that space is taken they go down and left. If all three are taken, they stay in place. (It helps to visualize it as sand falling down in an hourglass.)

So just using the colors by themselves produced this:

This is not useful. However, thanks to Quark we already know

Using this and the general rules give: 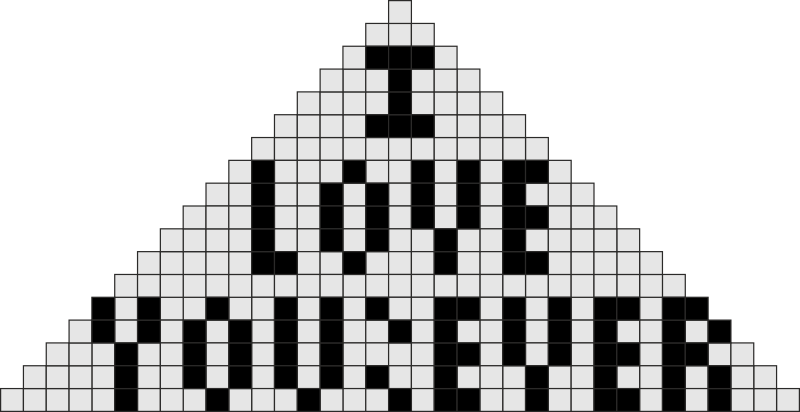 Finally, one can notice that

"I love you ever" is not really a proper English sentence, but looking closely there are 4 pixels between "you" and "ever", so the final message is I love you forever.

Note: the chances of this being necessary are slim because it's near impossible for this sequence to not contain any white bars and yet be a direct translation to something. However as I can't think of any other way this could be decoded, posting it anyway.

Just a little guess here. The letter "G" in the English Alphabet is number 7. Therefore I thought somehow 7 would be in that equation. I then thought what if you take each of the numbers and plug it into the pyramid. Anyhow this is what I have come up with:

This probably means perfectly nothing, but I thought I would throw it out there anyhow. 7 is at the top because the arrow is pointing there, and I thought maybe that is where "G" goes, AKA 7th letter of the alphabet.

35
Lolcat Steganography: Find the message hidden within the transport medium of humorous feline photography
7
The composer's code
3
What's the message this time?
11
The Unsolved Maze With The Annoying Rhyme
12
Our new colleague at work
26
Meatsacks, please help us decipher this code
9
A strange message in a library
9
Cryptic Puzzle for Puzzlers: PART II
2
Encoded Morse Code Interception
9
The Painted Barcode