Here is a simple riddle about numbers.

How would you insert 4 inside 5? 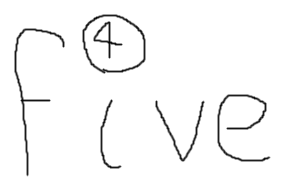 I might not be taking this question seriously enough...

As an apology for my previous answer, I'd like to offer the following:

Five fenceposts can have four panels of fencing placed between them.

A '5' lit up on a 7-segment display will have four interior right angles. (By coincidence of it being made of also 5 distinct segments.)

according to Wikipedia's page of List of numbers in various languages, there are no languages where the common word for 'four' is a subset or anagram subset of the word for 'five', at least as far as I could tell with my layman's eye, which was a bit of a disappointment. But graphically speaking, in the Tai-Kadai language Lao, 4 could fit into 5 quite neatly.

5
English-based riddle for a word
1
Crypto-Riddle: dce,/hcv uc
4
A visual riddle about a figure
13
My riddle at work
9
A Crozier Riddle
5
An old riddle about a loud house
7
An Arranged Riley Riddle
2
Who cut the cheese?
3
Riddle Number Three
2
Another Number Sequence Riddle