Someone has vandalised this long division. Can you reconstruct it?

Oh dear, someone has vandalised this long division.

They've replaced every digit either with a wrong digit or a hyphen.

Your task: reconstruct the entire thing. There's no remainder.

Please show all work. Use of a computer is not allowed. 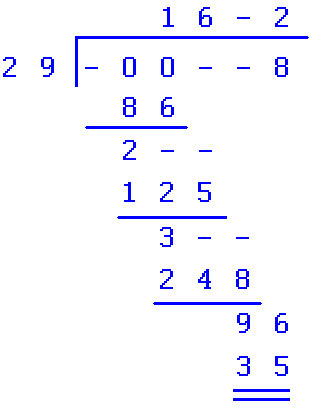 In the first subtraction, the number being subtracted is at least twice the divisor, but is only two digits. So the divisor is at most 49.

I think I found the answer.

Step one to find the divisor.

By looking at the number we know that the first three digits of dividend is quite close to 100 because the divisor is dividing it with 2 digits. And second things is the reminder of the first division is smaller than divisor and thats why the number has to be between 21-25. I thought odd number has more possibility to get this answer.

25 as divisor but it is hard to get 2 digit reminder in second step of division. Then I tried 23.

Now this number start making sense in my mind. Here's how

23x4 =92 which is very close to 100 and 23x5=115 which more quiet far from 100. so i chose 113 number between 100 and 115 Now if you divide 113 with 23 you will get 21 as remainder. Now according to given division it has to be small than divisor because we are going to drop one more number from dividend. Now that Number has to be close to a number which is close divisible by 23 and get 2 digit number as remainder which is also has to be smaller than 23.

So far we have first three digits of dividend 113 and 21 as remainder and now we are going to decide the fourth digit of dividend. I started with number 9 because its the biggest single digit number. so now we got number 1139 and our remainder become 219.Now 23 x 9 =207 which is the closest to 219. so now we got two digit remainder 12 which is smaller that 23.

So far we got first four digits of dividend which is 1139 and quotient 49. Now its time to find fifth digit of dividend. lets say the smallest number we can use is 0 which makes remainder as 120 and when you divide it with 23 you will get 5 as remainder and there is no two digit number which start with 5 is divisible by 23. so I change that fifth number to 1. Now remainder become 121 and when you divide 121 with 23 you will get 6 as remainder.

Here is my actual work 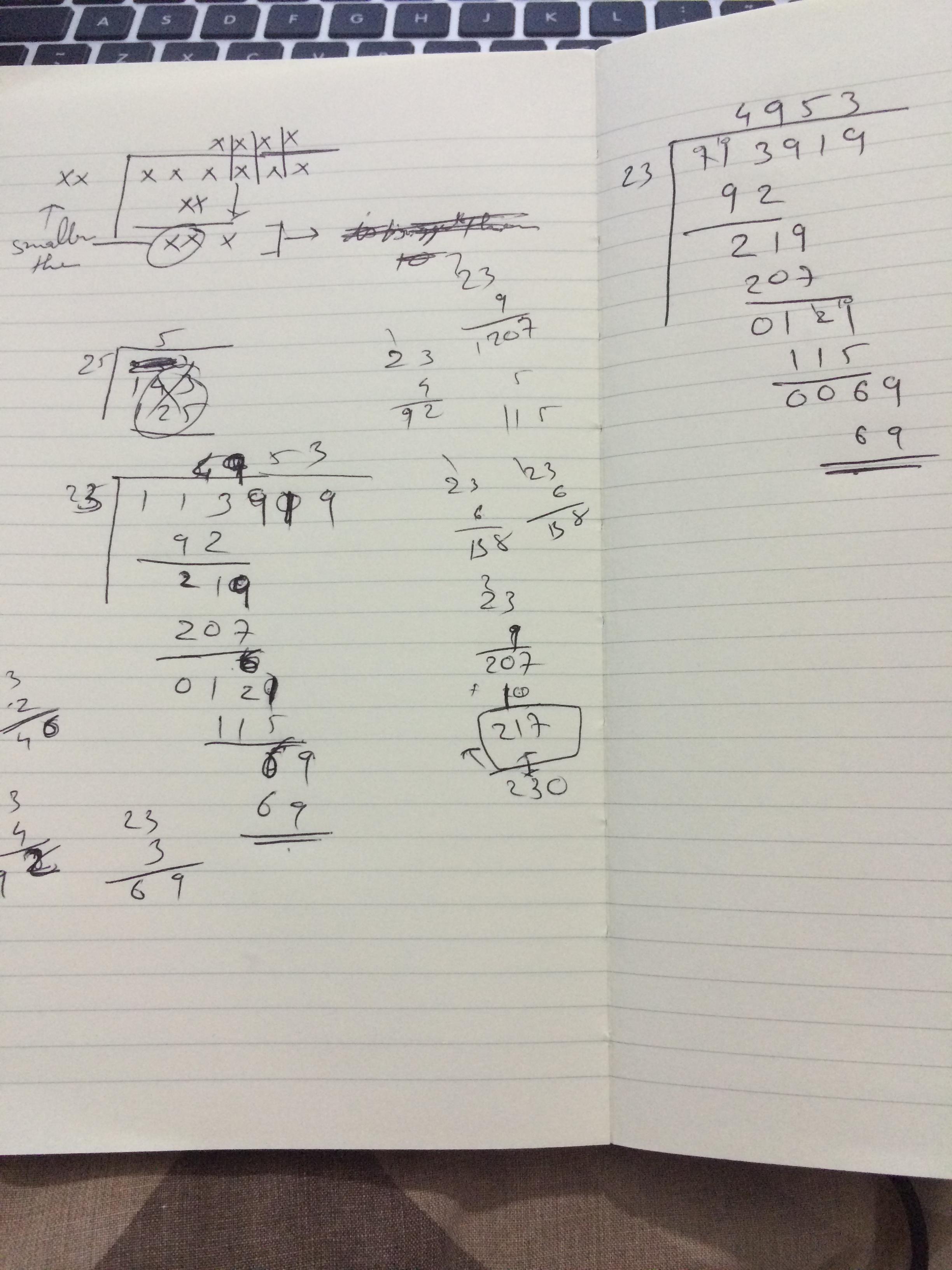 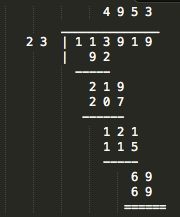 Not the answer you're looking for? Browse other questions tagged mathematics logical-deduction no-computers missing-digits or ask your own question.

5
How many digits can be removed from a division puzzle?

10
A rather curious division machine
2
Reconstruct this multiplication to find the combination for the safe
5
I Was Told It Would Explode
12
Reconstructing long division problems
6
Long Division Logic Problem
8
Let's go back in time!
6
Calculator Bomb
18
You surely don't want to score 100/100
24
Savage Road Signs