The governor of Reniets (a land far, far away!) is known to be very stingy.
He has to build a road which connects all the five cities in the region, which are oddly arranged on the vertices of a regular pentagon (see the picture below).
Building a road is very expensive: the longer it is, the more it costs!
His first idea is to build five roads, each connecting a city to the center of the pentagon, then he realizes that it might not be optimal. In fact, he remembers that, years ago, his friend had to connect four towers, and the solution wasn't trivial!.

How long is the shortest path that connects all the five cities?

Here's the optimal solution for the pentagon: 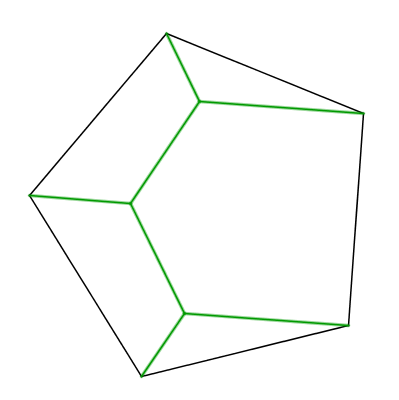 As the only Steiner tree for this set of five points, it is the only locally minimal solution, hence it must be globally minimal.

For regular hexagons and above, just take the perimeter and remove one edge.

Not the answer you're looking for? Browse other questions tagged mathematics story optimization graph-theory or ask your own question.

7
Lights in the Dungeon: Five by Five
14
Frugality 101: How to Replace Your Police Force with Cardboard Cutouts
9
Labryca -- Floor 2: No Cues
6
The followed and the follower
19
Surreal Dreaming in Wild Westworld
10
The highly public trial of Capo di Tutti-Capone
18
Maximum Height of a Hotel with Strange Elevators
6
Savage Road Signs (Part 3)
29
Food Fight! (An extended VowelBurger™ puzzle...)
3
Given pairs of weights find individual values