Droning On in Circles

In the spirit of wizards and circular prisons:

You have been imprisoned by an evil wizard in a perfectly circular prison cell of unknown size. You're shackled to the wall, unable to move about the cell.

Fortunately, the wizard isn't so evil that he won't give you at least one opportunity to escape. He tells you that if you can compute the area of the prison cell exactly (that is, deterministically, and to arbitrarily high precision), he'll let you go free.

To help you accomplish this task, he's given you three flying monkey drones, Arthur, Bob, and Dale, and a set of teleportation spells you can use as often as you like:

Conveniently, if you pull on Arthur's tail, he will tell you exactly what the shortest angle $\theta$ between himself and Dale is, as shown below.

If you pull on Dale's tail, he will tell you exactly what the distance $d$ between himself and Arthur is, as shown below.

There are three restrictions on measurement, however:

All three drones start at your location on the wall, which is unknown. You may assume that you have a perfect memory, and that you can compute any mathematical function to arbitrarily high precision.

Are you able to escape? And how?

Note: Generally speaking, I'm looking for a solution that

At step 25, $\angle{BD}$ sucks with probability 0, but we can still guarantee a solution in a finite number of steps against an adversarial teleporter because only four sucky locations exist. The geometry of sucking is left as an exercise for the reader.

Remark: This is not a complete solution. See the edit below.

Yes, it is possible to escape, using the following sequence: 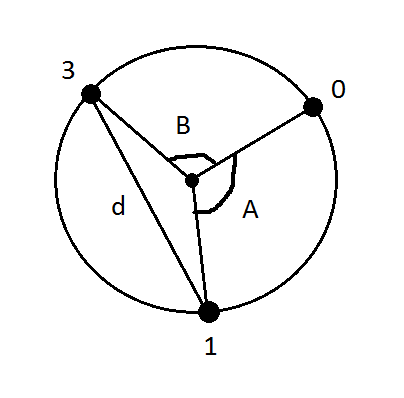 Edit: As pointed out in the comments, the situation could be different depending on the relative locations of teleportation. The picture might also look like the following: 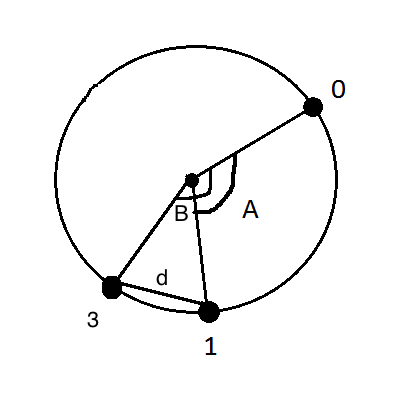 In this case the angle subtended by the chord of length $d$ is $B-A$, and the area of the room is

The difficulty is, without some knowledge of the relative positions of teleportation locations, we cannot know which formula to use.

Based on Julian's solution, I came up with the following. Mostly I just added in the repeat-as-necessary at the end to determine which calculated radius is the correct one.

Calculate the radius of the circle for both cases. One is correct, the other is not.

Repeat the entire process. One calculated radius from each measurement should match one from the other. That is the true radius. There is a vanishingly small chance that the incorrect radii would also match. Even if they do, repeat the whole process again.

Once you have the radius, calculating the area is straightforward.

This gets a bit odd, and assumes something about the rules.

The formula for the diameter is explained in great detail at https://en.wikipedia.org/wiki/Circumscribed_circle

My answer assumes a few things about the situation that I must put forth:

With these assumptions this is my answer: