What is a Cyclone Phrase™?

If a phrase adheres to a certain rule, then I call it a Cyclone Phrase™.

Use the examples below to find the rule. Also find the one error in the chart below. (In other words, one of the phrases below is not really a Cyclone Phrase™.)

If you liked this puzzle, try its successors:
What is a Scalable Phrase™?
What is a Triad Phrase™?

Each word in a cyclone phrase has

its letters in alphabetical order if you alternate taking them from the left and right sides. For example: dehorned --> ddeehnor, and adjourned --> addejnoru.

A cyclone phrase is made of cyclone words only. A word is called a cyclone word because it is in alphabetical order if you go around it like this: 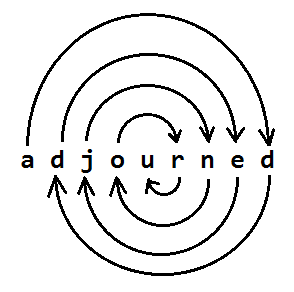 A Cyclone Phrase™ is one in which

for each word, the letters in the first half of the word (including the middle letter, if there is one) are in alphabetical order, and the letters in the second half of the word (again including the middle) are in reverse alphabetical order.
Example:\begin{array}{|l|l|l|}\hline\text{Word}&\text{First half}&\text{Second half}\\\hline \text{all}&\text{al}&\text{ll}\\\text{alone}&\text{alo}&\text{one}\\\text{at}&\text{a}&\text{t}\\\text{noon}&\text{no}&\text{on}\\\hline\end{array}The one exception is "an old bum begged". The word 'old' does not have this property: the first half, 'ol', is not in alphabetical order.

A Cyclone Phrase is one that either

contains two words which both have the same letter in the same position (e.g. "drug and dose" or "chug our ale")

contains a word in which the same letter appears the same number of places from both the start and the end (e.g. "blurb in my blog", "an astute moron")

or both. The one error is

"fork, cup, and dish" is not a Cyclone Phrase.

I got to this by wondering why it was called a Cyclone Phrase and looking for some kind of circularity or cyclicity in the letters, which led me to the ideas of alliteration and symmetry. Most of the examples have either two alliterative words ("all alone at noon") or a word starting and ending with the same letter ("cenozoic deluge"). From there, finding the actual pattern wasn't too hard.