I am not sure if there is a name associated with this game but I do not know of one.

There was this 2 player game I had once played, and I am wondering if there is a winning strategy. The game is as follows:

Each round,A random rock from the referee's (or computers) pile [similar to player rocks 1-6] is placed into the middle of the lever by the ref.
Each player then chooses one of their rocks to place onto the lever. (The players do not show their choice until they are revealed on the lever.)

The heavier rock chosen between the player wins the round, and the winning player receives the points for all the rocks on the lever. (Their number + random Ref number + opponents number).

The rocks used in a round are no longer able to be used in the next rounds. This includes the referee's rocks that go into the middle. (so if the ref uses rock 6, then the next round the rock in the middle must be random from 1-5)

If there is a tie, the rocks remain on the lever for the next round.
The player with the most points at the end of the game (6 rounds) wins!

Is there a possible winning strategy to this game? [Ties will be counted as wins]

Alternatively, is there a strategy which can give you the highest chance of winning?

Assume it can be used in either situation:

Did a little bit of simulation for this, using 8 players:

As all of these are purely reactionary, we can evaluate for all possible iterations of upturned stones. For interactions with the random player, I did a Monte Carlo simulation. For each "battle", we can create a results space: 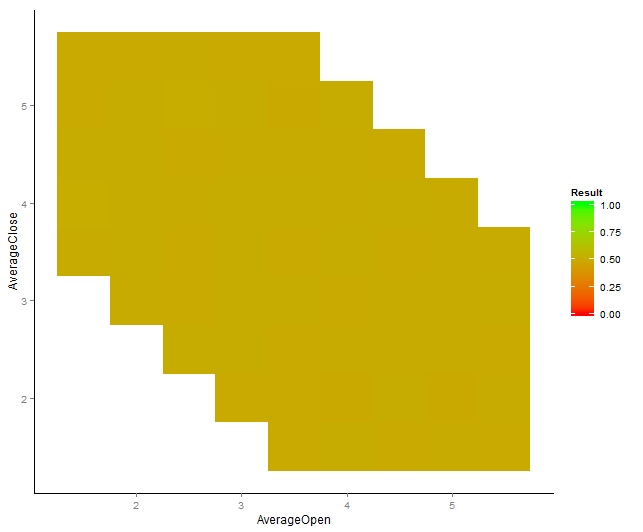 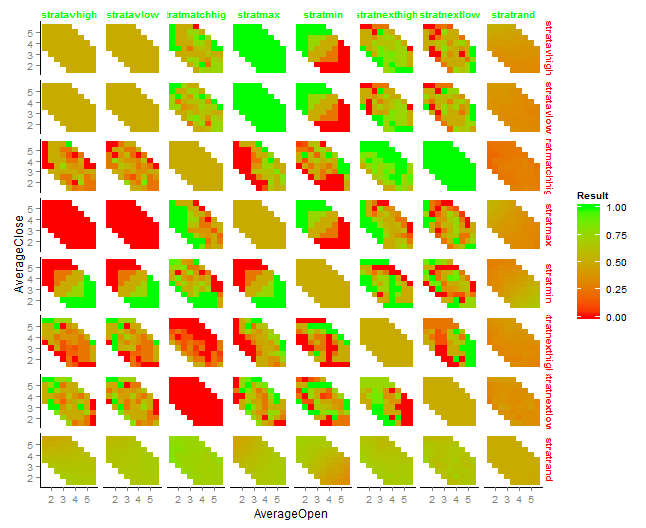 Each tile represents a different outcome, with green meaning that the x axis player won, and red meaning the y axis player did. Gold would either mean that every outcome was a tie, or there was a equal proportion of wins and losses for each "battle" at that coordinate.

Some interesting observations (although by no means exhaustive):

Thanks to Meelo I was able to find the similar game to which this is a variant (and get this answer).

One game is called Goofspiel(which is considered as a Game of Pure Strategy [GOPS]), In which 2 or more players are given 1 suit from a deck of cards each, and a 'prize' suit would be used for the intermediary. The prize suit is shuffled and one of the cards is placed between the players, and the players choose one card of their own suit to play. The highest card wins the cards 'prize' card that was placed in the middle, and the cards used by the players are discarded. This repeats until all the cards have been used. Points are defined by the card values (Ace - 1, King - 13). There are variants for how draws are dealt with (splitting, ignoring, 'roll over', etc)

According to the Wiki page: "Any pure strategy in this game has a simple counter-strategy", which demonstrates that :

A) The number of initial options each player has (>1) does not effect possible strategies. (i.e 6 rocks or 13 cards)

B) Any 'optimal' strategy that is used can be countered (if the opponent knows your strategy). If the opponent does not know your strategy (or psychology), then the winning outcome would be determined by the differences in your strategies as well as randomness of the 'prize' card (or referee rock) [Assuming both players stuck to their initial algorithms/strategies and that their algorithm has finite states].

In summary, the only way a player is able to have a 'better' strategy is to know his opponents strategy. This is why GOPS can be considered to be more on psychology of your opponent rather than pure tactics and predefined decisions.

Similar to JonTheMon's answer, a mathematician Sheldon Ross considered the case when one player plays his cards randomly, to determine the best strategy that the other player should use. Using a proof by induction on the number of cards, Ross showed that the optimal strategy for the non-randomizing player is to match the upturned card, i.e. if the upturned card is the Jack, he should play his Jack, etc. In this case, the expected final score is 59½ - 31½, for a 28-point win.

It is very interesting to note about GOPS, that it can relate to the micro-trading algorithms used in the stock markets today! These algorithms can work based on the assumptions of other traders/algorithms to try and best benefit themselves. In this scenario the price of option X would be the 'referee' in the middle, however in this case the price can also be influenced by the player!

Normally, you'd want to put a rock around the value of the ref rock. You don't want to waste a 6 on a 1 point ref rock.

However, things do get interesting if there is a collision. Say the ref rock is 5 and you both put 5 out. As a tie, that means that 15 points go to the next round. Naturally, you'd both collide with 6. Then 4. Then 3. Then 2. Then 1. Tie.

Let's take another important ref rock, 6. Now, most of the time you'd use a 6 to cover it, but then the opponent could use a 1 to get future position. Well, then you could use a 2 to maintain your position. And so on and so forth. Likely end with 50-50 chance.

Not the answer you're looking for? Browse other questions tagged logical-deduction strategy probability game or ask your own question.