Jack Sparrow and The quest for the missing Compass . Part 2

A short one this time around.

Jack and his crew reach the top of Oholu's Heart. They look around and see a cave further away. Tired but determined, the crew marches ahead towards the cave.

Just a bit further Jack sees an old woman sitting by a tree, mumbling something to herself and looking into the far beyond. Jack sat down beside her. For a while neither of them spoke anything. Then she turned her head towards Jack and looked deep into his eyes as if searching for something. Finding what she was looking for, she spoke ...
"If your first is left, then just take the rights."
Then she turned her head away, back the way she was looking and started mumbling again.

Jack sat there for a bit longer thinking. He then got up suddenly, smiled and yelled ...
"Boggles the mind .. doesn't it fellas."
and started walking towards the cave again.

They reach the cave entrance, a rather small one, and see that it is blocked by a huge boulder. Jack turned and spoke to his crew ...
"My dearest of dearsees, you might be wondering how to go about our business now. But fear you not. Our friend Mr. Spook here, ", pointing to a short and pitifully thin sailor whose name obviously wasn't Mr. Spook, "will have this massive monstrosity out of our path in a jiffy."

"Mr. Spook," now speaking to the sailor directly "would you be kind enough to kindly move this king sized rock out of our kindly way."

The sailor now completely perplexed, moved towards the boulder reluctantly. As he approached the boulder, he noticed something etched on the rock.
"Captain, there something written on the rock. Some words and such." he yelled.

Jack got close to the rock and read ... 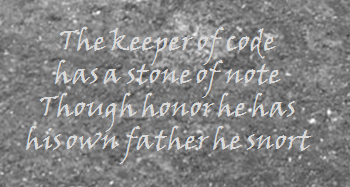 Jack took off his hat and bowed in respect.

He started looking around, trying to find something that might show him a way. A few moments later he saw something poking out from between two smaller rocks. He walked towards the rocks and carefully removed a piece of parchment where it was stuck. Something was written on the parchment.

He took out a book from the inside pocket of his jacket and referred to it. After a few moments he started to smile. He went to the boulder and whispered the magic words. And everyone saw in amazement as part of the ground on one side of the boulder started sinking in, and the boulder slowly rolled to that side opening the entrance to the cave.

What were the magic words.
And just for fun, Why did he bow down in respect?

The "keeper of the code" is the title of Edward Teague in Pirates of the Caribbean. Teague is Jack Sparrow's father, which is why Jack bows in respect. He is played by Keith Richards, guitarist for the Rolling Stones. Richards, has also admittedly had a drug problem and at one time snorted his fathers ashes. So, the stone of note is Keith Richards and this is a key for the cipher.

If your first is left, then just take the rights.

Translates to, for each pair of letters, take only the second one:

NOTE: This is showing my entire thought process. So I apologize if it doesn't really seem like an answer until the end.

Hexed is the master and so is his heirs... heir=air=breath
By "his own father he snort" I'm going to assume that the father was cremated, and the ashes confused for coke by his son. By the fact that his airs/heirs are hexed like the master, they are likely smokers. Solely from that, I'd say they died from pulmonary problems... But that's really not the point now, is it?
Hold it a moment... Hexed. Oh man, that one was good. I was going by Joe Z.'s comment about hexadecimal instead of base64, but I'm sure that clue was sneakily hidden in to the note.

Clearly, Jack bowed to pay respect to the dead, and/or the fact that the "son" confused his fathers ashes for a drug. Actually, scratch that. As mentioned in the comments, he was paying respect to his father, who was the Keeper of the Code.

It's clear that I don't know what the frick I'm doing here...
EXCEPT, as a flash of revelation just told me, "Hexed is the master and so are his heirs" is relating to their NAMES as well. THE MAGIC WORDS ARE THE NAMES.(Obviously, keeping in setting would churn out something silly, like Davy Jones or Barbossa. The second one sounds more plausible, but it couldn't possible be that one now, could it?)
wl9 broken vertical bar m euro ' U f percentile ASK British pound ae o O aj"a6 O...
Again, more nonsense that I can't make sense of. It sounds almost like a name that Twitch would assign to one of their Pokémon, but that's even more besides the point than the heir=breath idea. <.<
Well, nine... bar, m-euro...mural? Yeah, that's not right. I'm 100% positive that the only thing he's going to reference is Pirates of the Caribbean.
The old lady's comment, "If your first is left, then just take the rights" seems to make sense in this puzzle, if only I could figure out what the "first" is referring to.

Hex 20 through 7E is regular letters. 80 onwards through FF are special characters. 00 through 1E are function operators.

Here's a screenie of the text in Minecraft when I went to get some help: 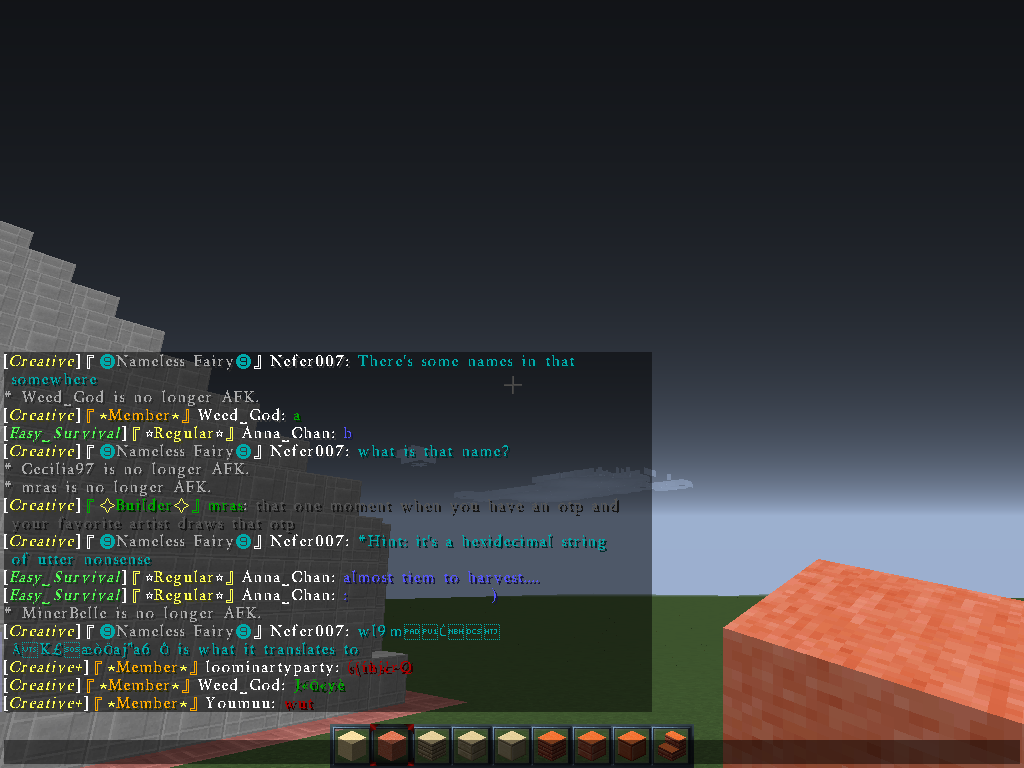 Ignore the other players, please.

Not the answer you're looking for? Browse other questions tagged riddle cipher wordplay or ask your own question.

15
Crack the code and become happy
12
Jack Sparrow and The quest for the missing Compass . Part 1
18
There's GOLD in dem der hills!
10
A Question Concerning Alice In Cryptic
28
There's no place like Home Theater!
37
Charlotte's lost fish
11
Tell me a story!
3
What in this world is she trying to say?
9
Luncheon in the dungeon
15
Help required stealing Christmas presents