Can Isaac get an even tan?

Isaac is in need of money to buy himself a car so he can go to the beach with his friends, so he's decided to start a lawn mowing business. When mowing lawns, he needs to make sure he gets an even tan so when he ends up going to the beach he looks good. We will consider Isaac to have four sides (front, back, left, and right) and each time he mows a new square meter he gets a point worth of tanning for that side. In the end, he needs to have an equal number of points for each side. Another way to look at this is that he needs to be traveling each direction an equal number of times. Here's an example: 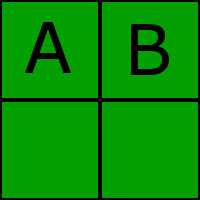 Assuming that up is North: if Isaac goes from A to B, he gets one point of tanning for traveling East. If he moves back to A, then he gets a point of tanning for traveling West. This would not give him an even tan because he didn't move North or South, so he would have to move up/down on the grid to get an even tan. Moving from A to B would also mow each of those, leaving the bottom two squares to be mowed.

Isaac's first customer is Mr. Banks. Here's an overhead view of his yard: 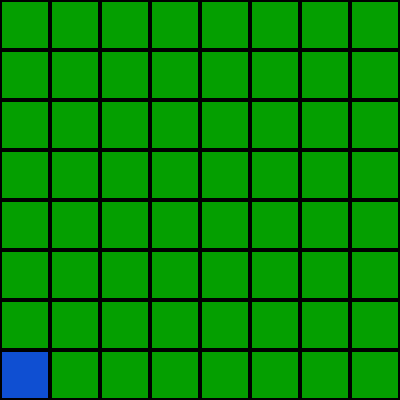 The blue space is the garage where Isaac starts mowing the lawn. He wants to mow the entire lawn and end up back at the garage, while getting an even tan and also using the least amount of gas. He can mow over the same spot twice, but it uses gas both times. Each square he mows over uses 1 unit of gas. Will he be able to get an even tan? If not, why? If he can, what route minimizes the gas used?

My best solution is:

Follow the red path, then go back and forth along the violet line. It takes only $68$ points! 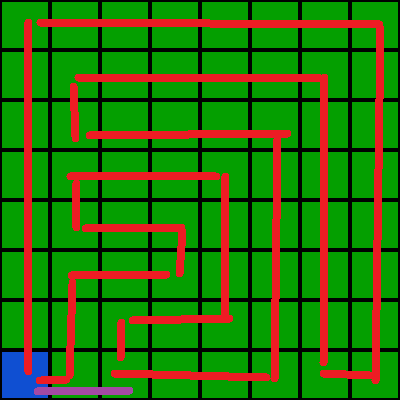 Is it possible to improve?

Sadly you can't! The lower bound is $16\times4=64$ moves, achieved when you consume $16$ points for each direction. Though, there's no Hamiltonian cycle that satisfies this condition, it was proved by @Joel Rondeau here

After drawing some possible closed curves of lengths $64$, you might start thinking of each possible solution as a big square with indentations. And in fact you can one at a time "pound out" the indentations to get back to the big square. Here is a picture: 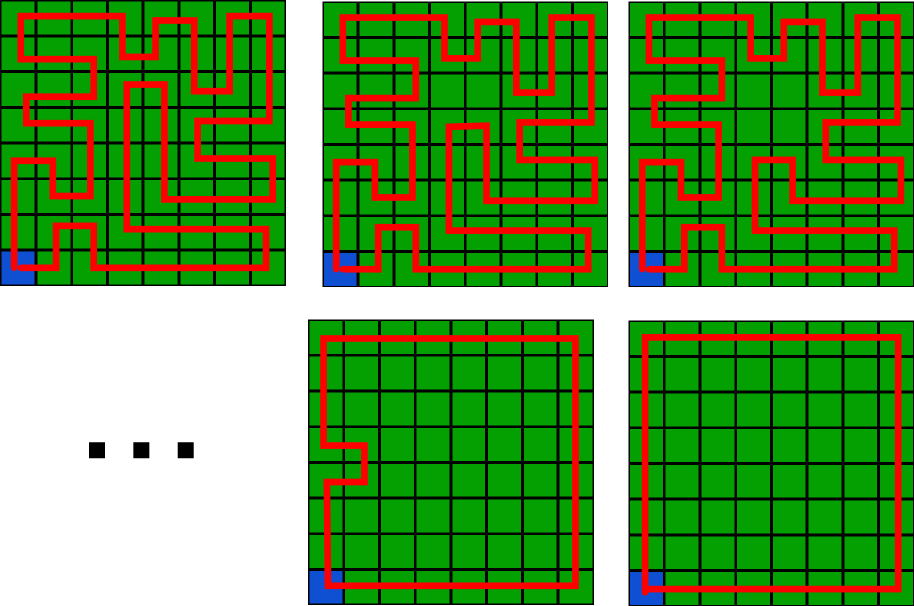 Each time you "pound out" a part of one of these indentations, you remove a "domino" worth of lawn in the 6x6 interior of the big square, and you lose either two vertical steps or two horizontal steps in the tanning process. Could there be an equal number of vertical and horizontal steps removed in this process? Well, no. This is equivalent to tiling a 6x6 chessboard with an equal number of horizontal and vertical dominoes, which cannot be done.

15
How can I generate mazes that often have multiple “forks” or choices?
8
Lost In Boston: How do I Get Home?
46
A-maze-ing Dice
18
2 Knights tied together in a dangerous maze
3
Get the largest number using the crazy circuit board
8
Help the Monkee get to the bandanas
5
How can I find riddles or puzzles to point players in one of two directions (in a maze)?
5
Eat all the circles MAZE