Cube made of 2x2x1 blocks which blocks all light

An Egyptian pharaoh wants to build a monument to the Sun God, Ra. He wants this to be a solid stone cube, which is $20$ hectocubits tall, long and wide.

His engineers get right to work planning this. The only stones the Egyptians have access to are $2000$ enormous rectangular blocks leftover from a failed project, whose dimensions are $2\times 2\times1 $ (all units in hectocubits), and which cannot be broken into smaller usable blocks. They figure that the easiest way to build this monument is in horizontal layers, each layer being a 10 by 10 array of blocks which lie flat. They present this plan to the pharaoh.

However, after seeing the plan, the pharaoh is furious! Since the edges of the blocks are lightly rounded, the cracks between blocks can let some light through. This is of course a problem, since the cube is supposed to be an homage to the generosity of the Sun God, so it should graciously accept the gift of the Sun's rays instead of letting them pass by.

The engineers get confused at this point, since they aren't as religious, and don't understand the importance of the pharaoh's request. Totally losing his cool, the pharaoh yells, "You fools! All I ask is that you

build a $20\times20\times20$ cube out of $2\times2\times 1$ blocks so no light can shine in one face though the cracks between the blocks and exit the opposite face!

IS THAT SO DIFFICULT!?"

Can the engineers succeed?

Note that the pharaoh wants the cube to block all possible beams of light, not just vertical ones. In other words, every line which enters one face and exits the opposite face must also pass through the interior of one of the $2\times2\times1$ blocks. The solution does not involve lateral-thinking, so the answer is not "just fill the cracks with mortar."

Edit: I changed it so that the cube is only required to block light which enters and leaves opposite faces. As @frodoskywalker pointed out, it was trivially impossible without this addition. Furthermore, I clarified other confusing points (breaking blocks is not allowed, and the cube must be solid, implying all the blocks are axis aligned).

The engineers can't do it, and here's why:

Let's consider an arbitrary arrangement of blocks. Consider the $19\cdot 19\cdot 3=1083$ axis-aligned lines (let's call those important) with integer cubit offsets passing through the monument. Every block in the monument can block at most one such line. (1)

Claim: It is impossible for any important line to pass through exactly one block.

Proof of claim: Assume there's an important line passing through exactly one block $B$. Let's consider the two axis-aligned planes containing this important line. These planes dissect the monument into four cuboids.

Now let's look at the volume of one of these cuboids, call it $C$. Since one of the side lengths of $C$ is 20 cubits and the other side lengths are integer amounts of cubits, the total volume must be an even number of cubed cubits.

On the other hand, $C$ is composed out of parts of blocks. Since $B$ is the only block intersecting both planes, it contributes one cubed cubit, but every other block contributes either zero, two or four cubed cubits to $C$. Hence, the volume of $C$ is an odd number of cubed cubits.

Now we have our contradiction, hence the assumption is false and the claim is proved.

The best I could do is this: 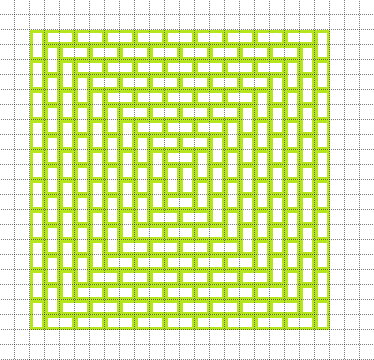 You could just stack this x10 and it would use exactly the given 2000 blocks, but it does not fulfill the criteria so I am just going to leave this here in case someone gets an idea from this.

Actually now that I thought more about it just rotate it 90 degrees every other layer and that should work.

Start in a corner. Stand a pair of blocks on edge so that they 2 units high and meet perpendicularly to form the corner. Lay a block flat on the ground inside the square so that it is snug up against these blocks. Light coming in the bottom unit of the diagonal is blocked by this flat block. If you were trying to make a 4x4 block you could plop another flat block down on top of the first and another pair of blocks around the other two sides and be done. But you're not.

Extend each side wall with another pair of vertical blocks. The seams you've just made are blocked (in the bottom unit) by the flat block that is already installed. Add three more flat blocks to tile the floor, which is now 4 flat blocks. Return to the corner and put vertical blocks inside the side wall. These are one unit further "in" than the outermost wall, so will block the top halves of the seams. There is still a diagonal seam right on the corner in both the inner and outer vertical wall. Lay another flat block inside to cover it.

Repeat the pattern at the other corners and work back towards the centre until everything meets. You have two layers vertically on the outside of the whole cube. The vertical seams are blocked by flat tile inside. The horizontal seams in each vertical layer are blocked by the other vertical layer. After that it's all flat tiles. The ones in the bottom-most layer are offset 1 unit from the others to keep sunlight from getting through to the ground. At the top, do the same as you omit the final inner vertical course.

33
Ernie and the Alchemist's Gift
32
Ernie and the Island of Stability
5
Brave Knight's Journey in N Dimensions
2
Alien Classroom Calendar
13
A Tomb for Fibonacci
12
Ernie and the Thrones of the Aqua-ant
6
Crystal Maze totem pole puzzle
12
Ray reflection inside the cube
2
What is an opposite face to the letter $T$?
6
Ernie and the Menacing Monopoles