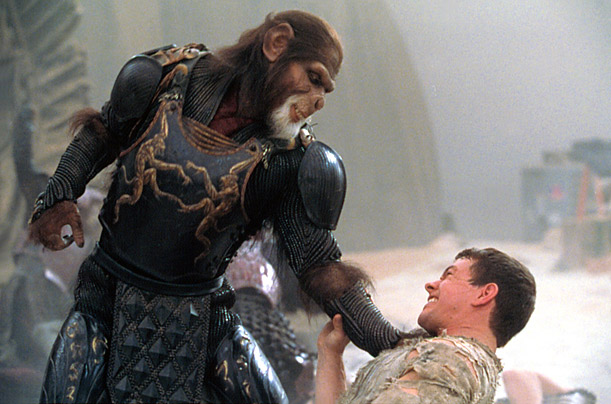 In a world not too different from our own, the roles of men and animals are reversed. It is animals who have dominion over men, and men who submit to animals.

In the beginning, animals and men lived in harmony. Yet as time wore on, the animals became more greedy and as their greed for power and control grew, so did their evil nature. Animals enslaved man and made a mockery of their lesser intelligence. Man was thrown into cages. Entertainment was provided to animal onlookers as men were given puzzles any baby animal was able to solve with ease. A popular pastime was to post puzzles to the Animal committee, which would transmit these to a central screen visible to imprisoned man using a computer and WERTYU-keyboard (not too dissimilar to our own these days). Shrieks of hyena-like laughter could be heard as men read the puzzles on screen & struggled to solve even the simplest of these to earn their meager meals.

And then in the 201st year of the baboon, there came along a man called Sethemba. Sethemba's intelligence seemed much keener than that of his fellow man. He embodied man's hope for a brighter future. As the years passed, the animal kingdom whilst at first amazed, grew more frustrated as Sethemba was able to solve any puzzle given to him. And so it came to be that the animals devised the most challenging puzzles yet. With it came a key to man's freedom. If Sethemba was able to solve this puzzle, animal would give man back his freedom. Man and animal would live as equals once again.

You are Sethemba. Man's last hope. The puzzle appears on the screen. It is clear to you that you have to find the next letter. Can you help secure man's freedom by solving the puzzle?

So next number on the sequence is 9 which equals to I on our keyboard and O on the animalboard.

Not the answer you're looking for? Browse other questions tagged letter-sequence or ask your own question.