Calling all puzzlers! I've made my very own cryptic crossword, especially for you! Good luck, have fun, and happy solving. 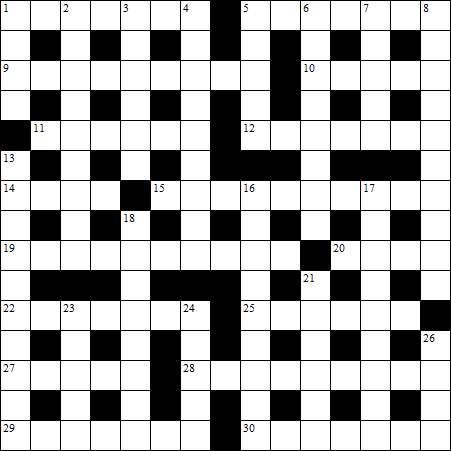 Really enjoyed this thanks, some great clues. My answers take the form of 'ANSWER - definition, explanation of wordplay' with stuff in square brackets containing extra comments.

[Edit: Having seen DevOfZot's answer, I would say that 7D may be too tricky for an indirect anagram, whereas 21D is acceptible. Of course, YMMV!]

BROTHEL - Lewd locale, BROTHE (sibling [brother] not all there) + L (bit of leg)

PRESCRIBE - Give directions, PRE (before) + SCRIBE (the writer)

ATTUNE - Become aware, sounds like A TUNE (a melody)

HINTERLAND - undeveloped area, anagram of (shattered) LANTER (most of lantern) in HIND (back section)

NEW FANGLED - present-day, contained in (into the embraces of) born aNEW FANG LED his pack

TOWN - City, anagram of (gerrymander [meaning to move political boundaries]) WON'T (will not) [loved the use of gerrymander as anagram indicator - not sure I've seen it used before. The clue reads very well]

ASCETIC - A monk lives an ascetic life, anagram of (away) ICE CAST

ACROPHONY - Symbolic representation [when the names of letters in an alphabet begin with the letters themselves], ORCA backwards (upside-down whale) + PHONY (false) [I had to look up the definition - a new one on me!] [A purist might question the use of 'upside-down' in an across clue]

ERRATUM - A mistake [in writing], R (bit of raw) RAT inside (putting into) anagram of (boiled) EMU

BAPT - Protestant, Beginnings of Broad Assault Potentially Threatens [short for Baptist? Is it actually a word or is it an abbreviation?]

OVERTHROW - Conquer, OVER THROW (shoot past)

STALWART - Loyalist, anagram of (broke) LAW in START (the beginning)

IGLOO - Cool house, G (bit of grass) inside (mix) anagram of (scattered) OLIO (potpourri) [tough one - I vaguely think I might have seen OLIO before in a crossword, but I had to look up the definition]

STANDALONE - Self-contained, STAND (not sit) ALONE (by yourself)

CLAIM - swear (to claim or swear something), I inside CLAM (mollusc)

Great puzzle! Particularly loved 18D, which seems so obvious in retrospect that I'm surprised I've never seen it in a cryptic before. And 24D is very well clued!

A note re: 7D and 21D: some people consider indirect anagrams (an anagram of a synonym) to be bad form in cryptics. Not a big deal to me, esp. since those clues are pretty straightforward, just mentioning it FYI.

1A. Not-all-there sibling touches bit of leg in lewd locale (7)

BROTHEL (not all of "brother" followed by a bit of "leg"; definitely a lewd locale).

TORT ("trot" is a synonym of jog, reversed becomes "tort" which is a crime).

OCEAN (an anagram of canoe and synonym of sea).

SPEAR (an anagram of parse and a type of weapon).

CLEAR ("confusing" suggests anagrams, so we want an anagram of "race" with one extra letter; L is the first letter of "left").

CLAIM (the letter I inside "clam" which is a mollusc; swear is a synonym of claim).