I have two 6-sided dice which between them have 12 different numbers, but some of the numbers are hard to tell apart because one is the same as the other upside down (like $89$ and $68$).

I throw the dice once and they land like this:

I throw them again and they land like this:

I throw them a third time and they land like this:

The question is: what do the numbers on the bases of the dice now sum to?

(I got this puzzle from here, where you'll also be able to check your answer - but please don't brute-force it to find out which answer is right by clicking all the possibilities! I'll only accept an answer if you've solved it all by yourself.)

logical-deduction calculation-puzzle dice
Share
Improve this question
asked May 25 '15 at 10:15

We are given that there are two six sided dice and that there are 12 unique numbers on them. Some of the numbers look the same as others but they still only occur once. For example we might see 66 and 99, we don't know which is which, but we know that they are not both 66.

The problem requires us to identify which die is which in the two images for each of the three rolls.

For the sake of clarity, we will call the die on the left in roll 1 "DIE 1", and the one on the right "DIE 2". We know nothing about the sums at this point. 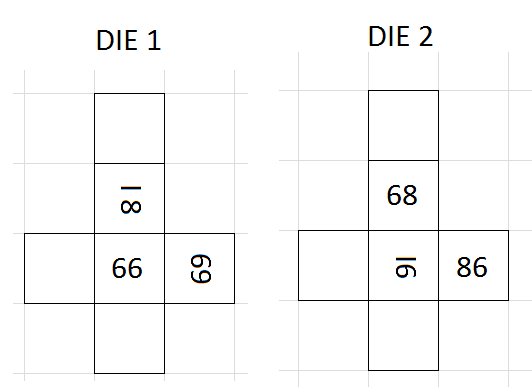 There is only one possible way to merge the two images of DIE 2 and that is like this: 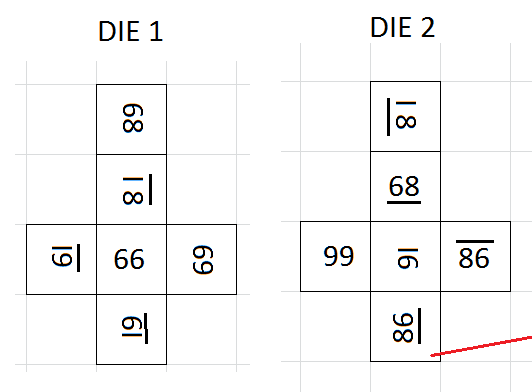 Proof that DIE 2 can only be built one way 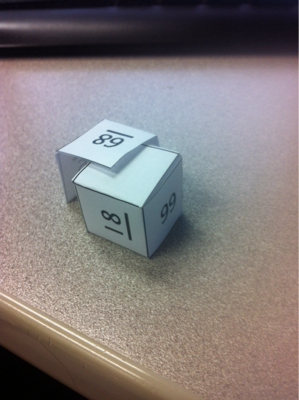 Not the answer you're looking for? Browse other questions tagged logical-deduction calculation-puzzle dice or ask your own question.