Find the secret phrase in this encrypted image (Part 4)

Welcome to the final stage of Quark's encrypted image puzzle series. I don't really like reusing old tricks so this puzzle will NOT require steganography tricks. There's not much else I can do to a .png to hide info anyway. (If there was, I'd add a single useful yet not necessary hint)

You are walking along the street (aimlessly bored as always) when a garbage truck stops by. You notice there's an interesting piece of trash stuck on the side. Upon closer inspection, you notice it could be a puzzle of some sort. The garbage collector notices you and says "yeah, some new hire in our recent program made those fliers, nobody's figured out what they mean except this one old guy who marked on it with a red marker".

Can you figure out what the name of the program is? 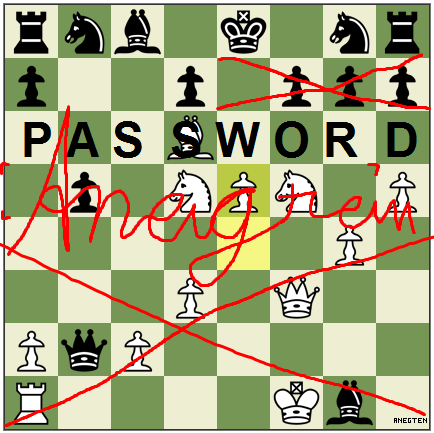 You only need the information in the picture to solve this puzzle. It could even be printed out and stuck on a garbage truck, you'd have enough information to solve this. That doesn't mean it's easy. Partial answers are allowed but only the final answer gets the correct mark so post at your own risk.

P.S. Anegten is the company sponsor of the program, so it is not the answer.

(taken out of comment) @2012rcampion I kind of hinted that there was a hint in the png. Okay here's some context (sort of a mini hint): the puzzle was originally a computer puzzle sent to fellow garbage collectors but the old man saw it could be made into a physical puzzle if he made those markings. He added two extra hints as well but left one out. The original puzzle would have been too hard/impossible without the markings so the puzzle author kept it in the fliers he made.

Note: This is an original puzzle, the context above is just for the story.

I'll add a hint early since I alluded to it in the comments. The chess position is actually important, and bringing in a chess expert could likely help. From the chess position, you should get a phrase of two words (relatively) famous in chess.

Based on the hints, it seems we're supposed to fit some words into the non-crossed-out spaces on the chessboard. PASSWORD is already present, and one of the annotations seems to suggest another:

We are also hinted to fill in the remaining spaces with a "phrase of two words famous in chess." Quark generously hinted that one of the words was GAME, which is probably intended for the fourth space. Thus we're looking for ........ GAME.

A search reveals that the chessboard pictures move 19 of the Immortal Game between Adolf Anderssen and Lionel Kieseritzky in 1851. My own analysis of the position ignored the fact that, "this move blocks the [black] queen from participating in the defense of the king," leading me to label the move a mistake (?), when it is actually a good move (!). The following moves were:

Our last hint is that these words form an anagram of the solution. We can simplify our task by immediately removing the word PROGRAM, leaving us with:

An online anagram solver then resolves this to:

Not the answer you're looking for? Browse other questions tagged lateral-thinking visual chess or ask your own question.