Jack Sparrow and The quest for the missing Compass . Part 1

Hopefully this puzzle is not as easy as the last one.

Jack Sparrow wakes up startled just when he was deep in slumber, after his night out with the "Ladies". He checks his pocket and finds it empty. No Compass!!! He springs up from the bed and notices some parchments at the corner of the bed. On top of the pile is a letter which says, 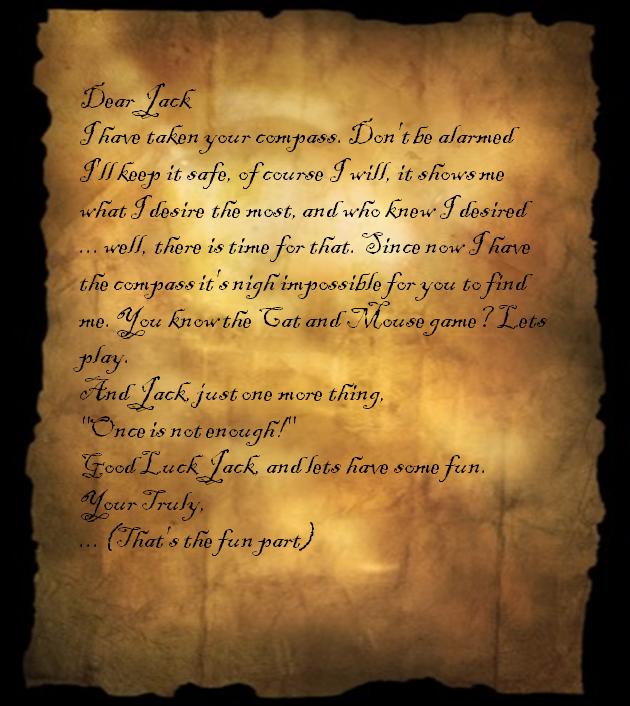 A panicked Jack, walks randomly across the small dingy room, and then tries to regain his senses. He looks through the pile of parchment and finds a map showing the islands near "Death's Gate": 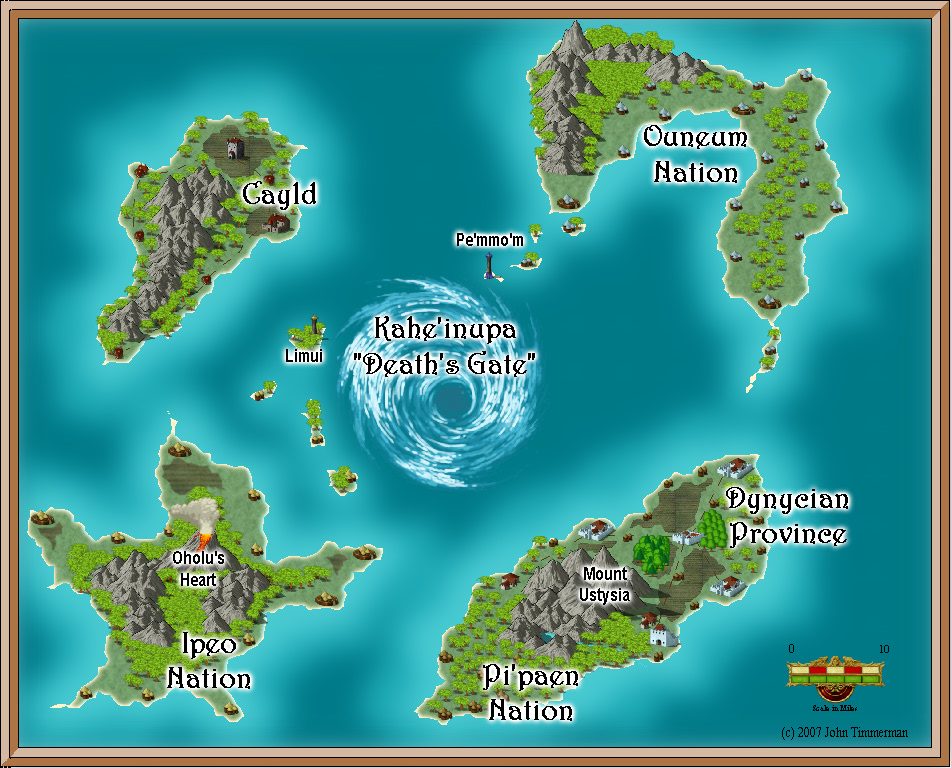 Jack thinks
He must want me to go to the Death's Gate. Might be a trap. But do I have a choice. And even if I go there, where to find the compass. It's not a trivial matter to look for a pin in those islands of haysack ... or haysack of islands. Not sure which one.

He looks at another parchment,

"Does he take me for a fool, I am Captain Jack Sparrow."
He thought. He stared at it, turned it upside down, shook it as if the compass would fall out of it at any moment. No Luck.

He takes another parchment and sees something that looks like some kind of prose. 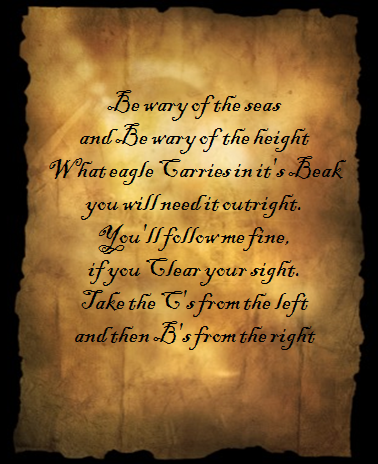 He mutters,
"I can certainly write better than that. The fine Ladies from the Port of Goron will tell you".

He moves onto the next piece.

"Aha, so you are a poet my friend, though a pretty bad one I must add. Then you must lack courage and valor. I on the other hand, am Captain Jack Sparrow".

Even though it's quite late, he goes downstairs to get a drink. A bottle of Rum and a warm fire, he takes a chair and goes deep in thought. Suddenly, he opens his eyes and runs outside looking for Gibbs. He finds him near his ship having a Whisky.

Gibbs
"What is it Jack"

Jack hands him a piece of parchment and says,
"Mr. Gibbs would you please read that aloud for me"

Gibbs takes the piece of parchment and reads:
Ser, you might be perplexed, and wonder where I went. But you will give up, once your will is spent"

Jack thinks and reads from the other parchment:
Be wary of the seas,
and Be wary of the height.
What eagle Carries in it's Beak
you will need it outright.
You'll follow me fine,
if you Clear your sight.
Take the C's from the left,
and then B's from the right.

Gibbs continues where Jack left off:
Do you also want me to get something,
to whip you Blue and White

Jack Sparrow smiles
Mr Gibbs, You don't understand. Someone stole the compass and I might just know how to get it back. We set sail now.

And Mr. Gibbs, bring KeyserSoze along, we need him to get to the compass

Gibbs,
Where we headed?

Next day, Jack wakes up late in the afternoon. Still wondering about the coded message. Something still didn't make sense. Wondering about all he had found, going through every parchment again and again. It happened while he was reading the letter. Specially the line Once is not enough. He look at the coded message again and
Aha, this is what I have to do.

He picked up the map and held it towards the sun, then looked the message on the parchment he just decoded and yelled,
"Mr. Gibbs, we are headed to ________"

Where is Jack headed?

Mr. Gibbs, we are headed to

The cave at the top of Oholu's Heart

Gibbs takes the piece of parchment and reads:
Ser, you might be perplexed, and wonder where I went. But you will give up, once your will is spent

Jack thinks and reads from the other parchment:
Be wary of the seas,
and Be wary of the height.
What eagle Carries in it's Beak
you will need it outright.
You'll follow me fine,
if you Clear your sight.
Take the C's from the left,
and then B's from the right.

There are three Cs and four Bs in the second group of text. Take the three characters from the left of the first text, "Ser", and the last four characters, "pent", yielding "Serpent".

Serpent is a form of encryption, I have learned. I went here http://www.tools4noobs.com/online_tools/decrypt/ and dropped in the text from the code

I used the key KeyzerSoze, Algorithm Serpent and mode CBC (thanks @George). This yielded

Some of that gibberish might have taken me to the right page, but it didn't direct me to the correct site. Understanding Google though, I went here:

to my desktop I uploaded it. I didn't have a password, and luckily I didn't need it. ;)

Not the answer you're looking for? Browse other questions tagged logical-deduction cipher word-problem cryptography or ask your own question.

7
Searching for gold
8
The Security To The party [Part 23]
13
Jack Sparrow and The quest for the missing Compass . Part 2
11
Batman and the grid
30
Where is detective Tom hiding?
18
The Djinni, the Marid and the Oracle (working title) :P
7
Ernie and the Mastermind
8
To Plunder Treasure Islands
8
The Two Envelope Game Show