Find the secret phrase in this encrypted image (part 3)

Welcome to part 3 of Quark's quest to make an image puzzle that isn't solved in under an hour. Like the last one, this will be much more difficult than the last.

In the below encrypted message, there are stages that lead from one to the next. There are two main words to discover, one at the ~75% completion mark, and one at the finish line. Put them together and you'll have a phrase related to computing.

What is that phrase? 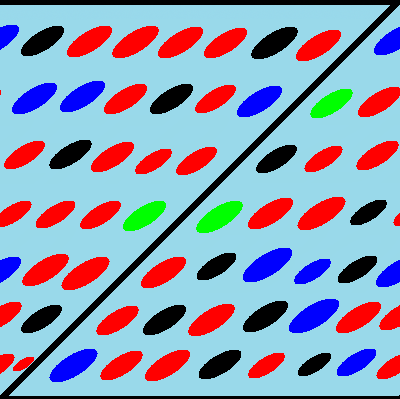 Hints definitely aren't needed to solve this but if it goes past a day or two I'll start giving hints. However, if this is solved under two hours then I'll admit that I underestimate this puzzling community and I'll be forced use drastic measures for part 4.

Note: The "ovals" in the picture are different sizes, ignore this because I made this sloppily in Paint. This was originally supposed to make smart puzzlers go "well he probably doesn't want us measuring their radii/center position so I'll ignore it" but I realize it's better to explicitly state it.

Note 2: There is no extra information in this puzzle other than the size thing mentioned above. I realized there is a phrase related to computing that is discovered around the 40% completion mark but this is not related to the answer and is just a hint on how to progress further.

(No spoiler tags because they're messing with the line breaks...)

First we do a trivial reshaping of the image to un-distort it: 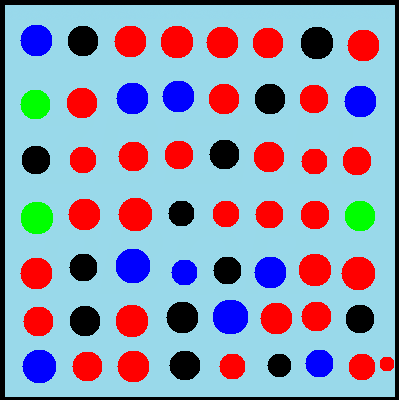 After noticing that the black pixels are not all exactly black, I extracted the lowest bit from each pixel: 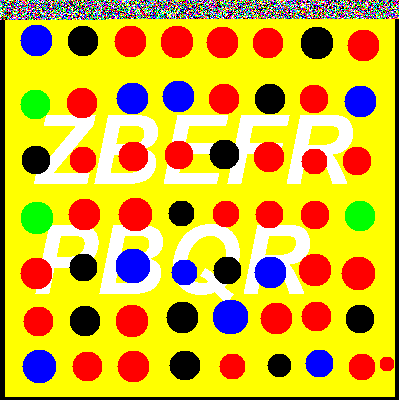 ZBEFR PBQR is MORSE CODE rot13'd. This suggests that part of the puzzle will be decoded using Morse code. After extensive randomness testing on the data burst at the top of the image, I switched to analyzing the dots.

First I played around with separating the color channels, since the pure/saturated primary colors suggested per-channel binary data. This lead nowhere.

Finally I pulled up the Morse code Wikipedia page, and immediately noticed that H is encoded as four dots. Where had I seen those before? The red dots at the top of the image. The two letters I know, T (-) and E (.) are both single dots: corresponding to the dots on either side of the four red ones. Put it all together and you get THE! I realized that the colors were a Morse code substitution cipher with the following mapping:

This allows us to decode the dots as:

Entering embedded as the password into a suitable online decrypter, we obtain the following image file (chip.png): 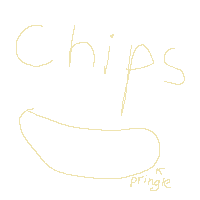 Therefore the answer is EMBEDDED CHIPS.

From 2012rcampion's answer, we get "morse code".
From this, we can think there's a message in morse hidden in the image;
Morse code needs four symbols: (-), (.), ( ), (/)
In the picture, the ovals come in four colors, so maybe each color stands for one symbol.
Green is the least frequent so it's the word separator, /;
the letter separator can only be black, since red and blue can come in pairs;
red has to be the dot, since the second letter, rrrr, doesn't make sense as dashes (while as dots, it's "h").

Not the answer you're looking for? Browse other questions tagged lateral-thinking visual cryptography steganography or ask your own question.