Points in a Rectangle

I was asked this question in an interview, so I am not sure what the optimal answer is. But here it goes:

Given a rectangle with length l and breadth b, I pick 4 random points inside it. What is the probability that the 4 points lie in the same half of the rectangle?

I was asked about 3 points first. They saw my approach and were satisfied and then asked me what if there were 4 points.

The one to prove it gets the check mark.

Well, after seeing the solution I guess I have a proof for the question.

Like many others earlier, the probability for the first and the second points to lie on the same half is $1$. I would not get into that as it is already shown by other.

Now comes a little complicated part. Consider the "separating line" is changing it's slope continuously by a very small amount. In that case the two halves will keep changing shapes. It's important to notice that in the intervals of $180$ degrees and $360$ degrees the all the halves are taken into consideration and since the halves can be defined by any "separating line", we can safely say that the probability of the point $p_3$ will increase uniformly from worst case to best case. That is, uniformly from $0.5$ to $1.0$.
Thus, the overall probability of point $p3$ lying in the same half will be
$(1.0 + 0.5) \div 2 = \frac{3}{4}$

Thus, proved. Thanks for the check mark in advance :P.

Please correct me if you think I am wrong.

We can obtain a general formula for $n$ with a simple idea.
You have $n$ points inside the rectangle. Now you choose one (there are $n$ choices) and draw a line passing through it and the centre, determining two halves. Now, what's the probability that each point is in the same half of the previous? Of course it is $\frac12$ for each point! Now, we have all we need to deduce a general formula:

You may say: "Hey, but there are infinite halves that contain one point! Why did you choose the one passing through the point itself?"
I did because that's the limit case! If you don't think so, check the pictures below. The yellow area shows all the valid halves given $n$ points. As you can see, the yellow area is delimited by lines passing through the points themselves! 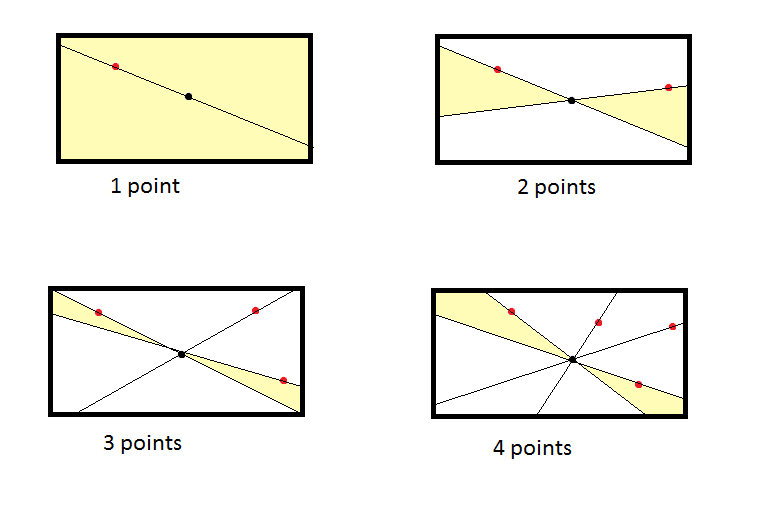 Additional note: when you draw a line, you're actually drawing 2 vectors, with opposite direction. Each vector represents one of the two halves. That is, the above formula is actually the simplification of $p(n)=n\times (\frac12)^{n-2}\times2$

The answer is heavily based on this and I've tried to simplify it a bit.

Basically the solutions is:

Let one of the points lie on the "rectangle separator". From there on, we want all other points to be on the same halfplane. Picking a point we practically make "coinflip" on which side will the point land (this is correct as the two halves have equal area). So we get $1/2^{n-1}$ for each separator point. Since the separator can be anywhere (in terms of rotation around the diagonal intersection point), trying out which point lies on the separator are disjoint events. So we sum that up for all separators getting $n/2^{n-1}$.

Alternatively, one can try to get the odds that 4 points do not lie in the same half. Will write that up later.

Similar to leoll2's answer, but with a different explanation.

Now if we added a third point things get slightly more interesting. Here the third point can be on a part where we would not be able to divide the rectangle in half (the red area in picture). There is a 1/4 probability for this, or rather 3/4 that it is on the same half. (If the points are the closest to the lower right corner) In the extreme case where the points are on the line, there is a 100% chance the third dot is the same half. 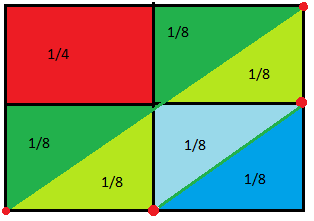 The red dots are in the most extreme position(s).

If the third dot was in the green area, then there is only 1/2 chance of the 4th dot being on the same half.

I realize now that it can be dealt with in quarters, but I didn't feel like changing the picture again.

If the second point falls in the opposite quarter (1/4 chance) there is a 1/2 chance that a different division of the board would result in the points sharing a half (resulting 1/8 chance for each outcome.)*

This results in four possible outcomes for the second point:

A : Chance of second point falling in 1. Same quarter 2. Adjacent quarter 3. Opposite quarter.

B : Chance of failure, third point falls in the other half to existing points.

Extending to the main 4 point problem:

C: Chance of failure, fourth point in the other half to existing points.

*Yet to be proven.

5
Is there a second solution to points and perpendicular bisectors problem?
13
Connect four towers by roads
22
Worm and an Apple
11
Icosikaitrigons
33
Slicing a rectangle
3
8 Train Stations
11
Pentomino solution maximizing straight lines length in rectangle - wood cutter problem
6
Line segments inside a square
3
A rectangle, a circle, and a triangle are drawn on a plane