The Super-CUBI puzzle box takes 324 steps to open or close it, instructions. And uses a Trinary System. It must have a solution as it would be hard to remember all the steps to take to open it. But what is it ?

As you have said, the Super Cubi requires 324 moves to be opened. The correct sequence is listed here: 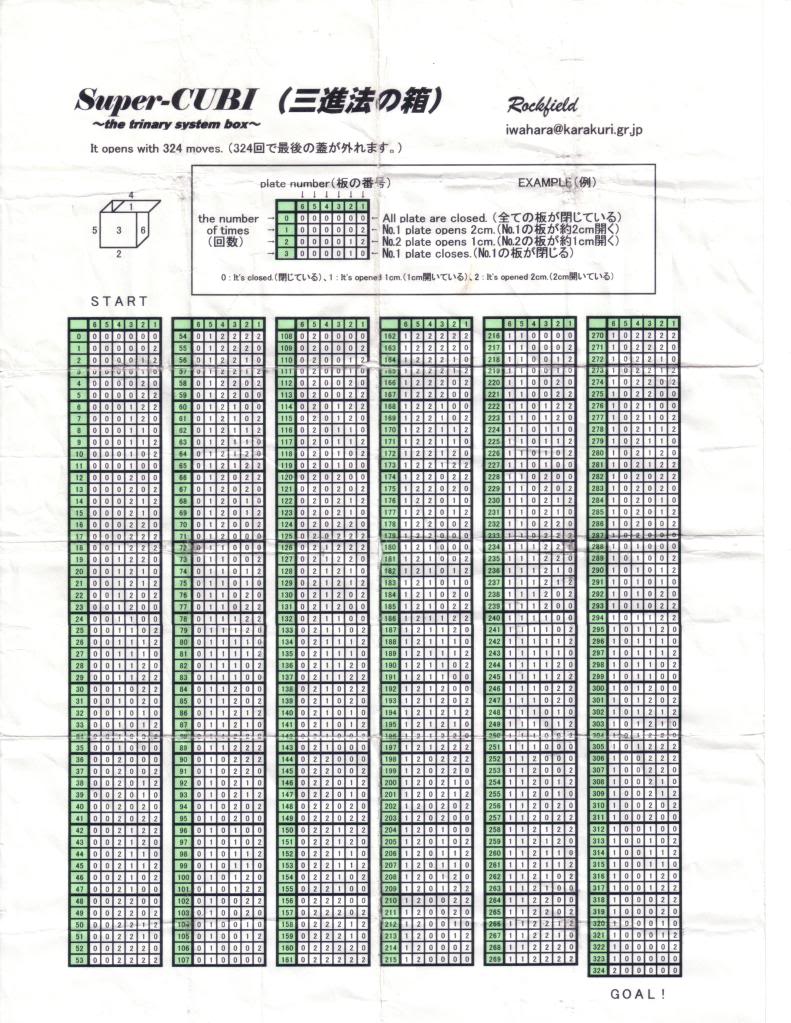 In each step, you have to move one of the six faces. The numbers in the table represent the centimeters of translations. For example, 000022 means that faces #1 and #2 were moved by 2cm.

But how do you remember that sequence?
As you can see, in the first vertical half of the table the face #6 is always 0, while in the second half is always 1 (except for the last move). The face #5 is 0 for the first and last column, 1 for the second and fifth, 2 for the third and fourth. We can find similar patterns for all the faces.
Let's define "bounce" a move that follows the cycle [1,2,3,3,2,1]. When you apply the bounce move to a face in a certain status, the next status is determined by the next number in the above cycle. For example, if you bounce from 2 (and the previous status was 1), the next status will be 3.
Now a general rule to remember the moves (needs some practice, though):

As you can see, the bounce distances increase with a factor x3 between two consecutive faces.

Not the answer you're looking for? Browse other questions tagged logical-deduction pattern rubiks-cube mechanical-puzzles or ask your own question.

12
The Puzzle of the Locked Box
17
Difficult IQ test question: What is the box suggesting?
10
Physical puzzle in four parts
24
The tilted labyrinth - Can you find the fastest path in this 3D-puzzle? (Simulator now included.)
7
Need help finding the solution for this Altekruse/Burr puzzle
10
Can you solve this masyu puzzle?
3
Solve the Lyne puzzle
13
Puzzle Box: Spiral
4
Trying to build a sudoku related puzzle box, struggling to ensure that there's only one solution
3
How to solve wooden octagon box puzzle?