A mysterious signal from space

It's late in the evening when your friend Mike, a brilliant astronomy student, points his radio telescope to Omega Centauri, a large globular cluster distant almost 16000 light-years from the Earth.
After inspecting the sky for a few minutes, you notice a strange signal coming from an outer star. It's a 177 GHz microwave radiation with a variable amplitude.
Mike is amazed, he has never seen a signal like it, so he decides to analyze it.
Immediately he notices that the wave conveys a sort of message; then he observes that this message is periodic, so he is able to extrapolate this binary sequence:

Now, Mike is at a dead end, he has no idea of how to interpret that signal. Does it really contain a message? Is it artificial or natural? Aliens are communicating?

Help Mike finding all the information included in the mysterious signal.

cipher enigmatic-puzzle story
Share
Improve this question
asked May 16, 2015 at 14:38

Arranged correctly the bits form a 19 by 41 grid very similar to the Arecibo message.

Based on the pattern used in that message, this message contains the following information.

Their body chemistry is composed of the following elements:

Probably in these compounds...

The aliens have two of what might be arms, three legs (I hope they're legs), and two horns, large ears or antennae.

They might have considerable sexual dimorphism or fly about in 50s style rocket ships.

They live in a binary system on the third rock from their suns. The closest planet in the system to the suns is the largest.

Just for clarity, this is a picture of the solution (the bits arranged in a 41x19 grid). 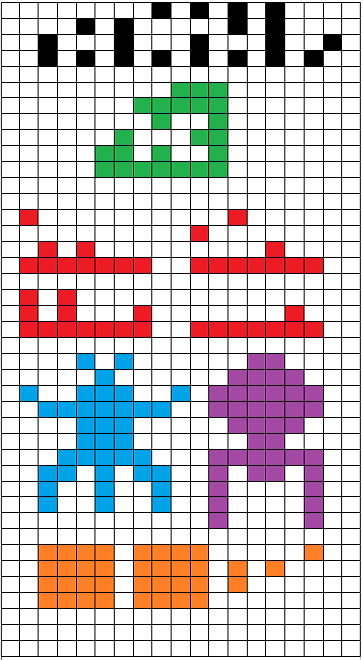 As you can see, it resembles the Arecibo message.

Not the answer you're looking for? Browse other questions tagged cipher enigmatic-puzzle story or ask your own question.