Ernie and the Alien Invasion

Yesterday I dropped in on Ernie to show off my new j-watch. Ernie wouldn't be impressed by instant wrist-mounted access to social media sites like me-tube, tweeter and farce-book so I thought I would concentrate on it's technical aspects - 1024 GB RAM, green-tooth, USB5, high-res touch screen and 6G networking. As he brewed us coffee I demonstrated the trump-card of the j-watch: its 8K UHD camera - 120 FPS at 7680x4320 pixels, with surround-sound directional microphones! In my enthusiasm I must have bored myself to sleep because the next thing I remember was waking to hear Ernie complaining that his coffee was cold. I was late for an appointment and had to leave in a hurry.

At least that is what i thought happened until this morning! After breakfast I tried to use the j-watch's Memo app to remind myself to buy eggs. To my dismay the watch just displayed a flashing "MEMORY FULL" warning. It didn't take long to find the problem - a massive 1023.9 GB MP5 file. I realized that I must have left the camera running when I fell asleep at Ernie's. I was going to delete it but thought I would review the first few minutes to see the picture quality. The following is a precis of what I saw and heard:

Picture: A shaky (but crystal clear) view of my face in close-up as my voice explains the magnificence of my j-phone in exuberant detail. Ernie puts two cups of coffee on the table. The next 30 seconds is blanked out as my sleeve drops down over the camera's lens while recording. (I began to wonder at the practicality of a wrist-mounted camera and if the added expense of the UHDV camera had been worth it. I was just about to delete the file when...) The sound of Ernie's door-bell can be heard on the sound-track. ("Curious", I thought, "I can't remember any visitors").

Me: "I'll get it" (This was really weird - I definitely couldn't remember answering the door!).

Me: "Not to be rude - but whatever you are selling, we don't want any".

MIB1: [Pushing his way somewhat rudely into the hall] "We are from MIB - it is imperative that we speak to Professor Ernie immediately!".

MIB2: "Don't be ridiculous - we are from the Ministry of Interstellar Bureaucracy". [The two men greet Ernie and explain that the Ministry was created when an alien-manufactured Tachyon wave radio receiver and universal translator were discovered in the wreckage at area 63! Apparently, the galaxy teems with a multitude of intelligent species. Until recently the radio hadn't provided any useful information to aid mankind as the only signal was live coverage of rather boring Interstellar Council meetings dealing with minor issues such as spiral-arm planning consents and sales taxes on micro-black-holes. But just a few hours ago a very worrying message was heard. An Eviction Notice had been lodged at the Council by a race of carnivorous lizard-people. They were planning to return to their home planet after a 'temporary' absence of ~64 million years (some sort of problem with the environment after a failed attempt at asteroid mining) but discovered the planet was 'infested by bald tailless apes'].

MIB1: "We realized they were talking about us - humankind!"

MIB2: "We fear the worst. The lizard-men have a mass of heavily armed and technologically advanced worm-hole drive space ships ready and waiting - they can be here within hours of the court giving consent." 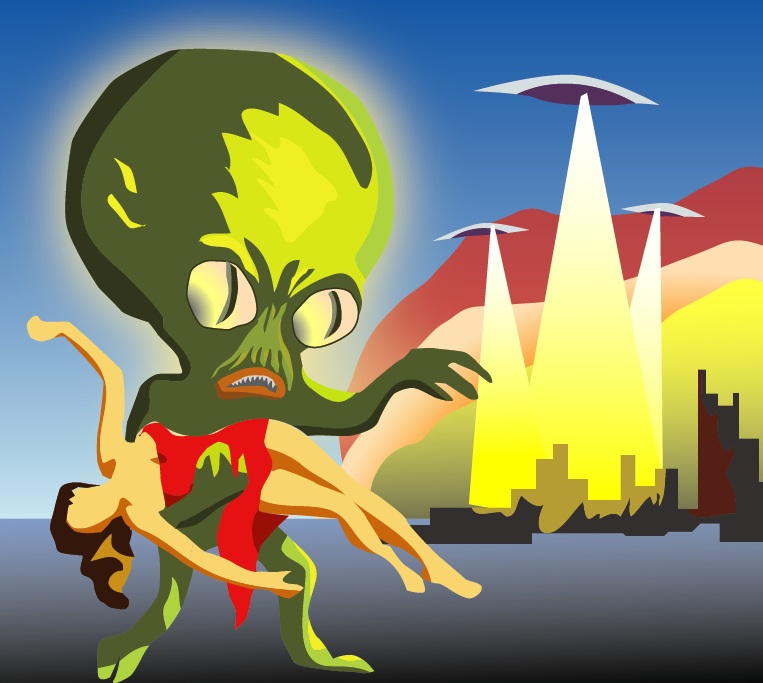 Me: "Has the court made a decision yet?"

MIB1: "No. One of the council members reminded the lizard-men that parts of Earth had been declared a wild-life refuge."

Me: "A refuge for bald tailless apes?"

MIB2: "No - for a rare species of woodlouse that lives in the rain-forests of Sumatra. Seems that it bears a slight genetic similarity to the councilor's distant ancestors. And it is only a temporary reprieve. The lizard-men only need to confirm they are willing to comply with a list of Intergalactic Environmental Laws. Then the 'eviction' can commence immediately. Ernie - we want you to invent a Tachyon transmitter so we can contact the court and make an appeal - our best lawyers are already preparing their arguments".

MIB1: " The court requires written confirmation that the lizard-men will obey all relevant laws in a list defined by a special Environmental Law Identification Algorithm."

Ernie: "An algorithm, tell me more!" [The MIBs described the algorithm as follows...]

Ernie: "So the first few clauses to be tested would be..."[the sound of a white-board marker squeaking]

Picture: a momentary view of the white-board before my sleeve slips down over the lens again as I scratch my itchy nose - (I am allergic to stress - it always makes my nose run).

Ernie: "...and when the Lizard-men reach the last sub-clause the court will accept the eviction order?"

MIB1: "Precisely! But the lizard-men are already way past that point on the list - they and the council are using super-fast quantum computing legal engines to write and test their legal arguments, it takes precisely one second for each sub-clause to be accepted. So as you can imagine, we don't have much time to make contact with the court and send an appeal!" [long pause with just the sound of Ernie humming to himself as he does when he is thinking hard, plus me sneezing more and more]

Ernie: "To be honest, I don't know the first thing about how to build a tachyon transmitter but I can tell you that the last sub-clause the lizard-men have to satisfy will have a label of the form..." [sound of white-board marker again, but my sleeve is still in the way and the picture is blank]

Ernie: "...and I recon that the time it will take before the last sub-clause is reached will be about ..." [at that very moment my allergy strikes again and Ernie's next words are drowned out on the sound-track by an enormous sneeze]

MIB1: "We need to get this information back to the Ministry immediately. My apologies, but to maintain security we now need to use the brain scrambler we found in the wreckage to delete your memory of our visit. This won't hurt a bit..." [a momentary buzz on the sound-track and the video image fills with static for a few seconds, then the sound of footsteps heading off. Followed by a few minutes of quiet snoring then...]

Picture: My face (in unflattering close-up) appears as I pull back my sleeve to check the time.

Me: "And I am late for my meeting in town..." [video ends with Memory Full warning]

So here is my problem - I just rang Ernie and he doesn't have any memory of the visitors. I tried to explain but he thinks I just had a bad dream and won't take me seriously. I would show him the video but I think the brain scrambler may have damaged my watch because now it just displays a "file not found" message. Should I try and find a hiding place right now to escape from an imminent invasion, or is it better to try and convince people to make preparations to repulse the lizard-men and protect themselves?

Can anyone let me know what the number of the last sub-clause will look like and how much time I have to prepare for the invasion of the lizard-men?

Click on the link to confirm what I mean by subsequence

The last sub-clause must be:

I'm very much building on John Stevens' answer, and I'll be using the terms that are defined there.

Let's demonstrate this for tier-$4$. Here are all the sub-clauses up to this point:

(Note that tier-$4$ is actually 13-long rather than 10, which already increases the bound. But this is not the point.)

Sub-clauses 6-11 are constructed in John's way. Indeed, one of the first three characters of the suffix is always $1$, and the two last characters are always a tier-$3$ suffix. Sub-clauses 12-18 are the new ones - they only have up to 2 $1$'s (apart from the prefix), all in the last 3 places.

Let's re-calculate $K_0$ according to this:

Obviously, the extra suffixes become negligible at low-$n$ tiers, but the accumulative effect is great.

In addition, I wrote a function to generate the first tiers of the series of laws. It's a nice programming challenge, and I used John's observations about the prefix and the centre to make it efficient. The function doesn't assume anything about the possible suffixes, though, but checks all possibilities (efficiently). I put the function at the bottom.

At one second per sub-clause, this will take:

Here's the Python function ('calculate_chain' should be used. It calls the recursive 'generate_suffixes'):

The sequence of sub-clauses they must obey is finite, by Higman's Lemma.

The number of the last sub-clause has the form

by the argument in Angkor's answer.

Call a clause or subsequence of a clause forbidden if it contains a previous clause as a subsequence.

Observation 1: The length of the $1$-prefix never increases.

This again follows from applying Angkor's argument to the substring starting from the first $2$. $a_n$ is the number of $2$s in the final clause of tier-$n$, and has a different value for different tiers.

This subsequence is forbidden. If it is identical to the final clause in tier-$(n+1)$, then it is clearly forbidden. If it is not, then $Y$ contains at least one $1$, and thus this subsequence comes earlier alphabetically than the last clause of tier-$(n+1)$. This clause must have been forbidden at that point in the sequence of clauses, or else it would have been used there instead of the clause of the form $1^{(n+1)}2^{(a_n)}$.

Observation 4: Suffixes for clauses in the same tier appear in alphabetical order.

Each $\hat{S}$ was chosen to be unique, so by observation 6, no clause in tier-$n$ can contain another as a subsequence. Therefore, every one of these candidate suffixes can appear in tier-$n$. There may be additional possible suffixes that do not take the specified form, but this should be sufficient to establish some bounds.

We can now put a bound on the total number of clauses. Let's manually compute some possible clauses in tier-$4$:

At one second per clause, it will take

to process every clause. And this isn't a tight bound, since at the very least we didn't include the clause of the form $1^{(n)}2^{(m)}$ in the estimate! It will likely be

significantly longer than that. Anyway, I'm not worried about an impending lizard-man invasion. And hopefully humanity can invent a tachyon transmitter sometime in the next twenty millenia and file an appeal.

Not the answer you're looking for? Browse other questions tagged mathematics calculation-puzzle word-problem number-sequence or ask your own question.