Two knights jousting on a chessboard

Two knights (black and white, the latter going first) start on opposing corners of a chessboard, moving across it in the usual manner, attempting to capture each other: the knight who first lands on the square currently occupied by the other knight (i.e. capturing it) wins.

To ensure that the game doesn't go on forever, each knight must increase the distance from his point of origin (unless that move would immediately capture the other knight). If neither can move forward nor capture the other then they are tied.

Show whether one of the knights can force a win, tie or loss.

There are six cases to consider: whether either of them can force a win, tie or loss.
Each move sends them to a square of a different color. A knight must start from a different-colored square to end up on the square the other knight is on. Since both start in opposing corners they start on squares of the same color. Therefore white (going first) can never win and black never lose.
Black can force a win if and only if white cannot force a tie. White can force a loss if and only if black cannot force a tie. Hence it suffices to show 1. either that black can win or white can tie and 2. either that white can lose or black can tie.

Its easy for white to force a draw.

If the starting position of white is h1, the next moves are g3, f5 and then depending on blacks move either g7 or e7. Black can't move back toward his corner so white has escaped.

Black can escape with a similar strategy by moving to b6 then c4.

If one player can never win then that player will always force a draw.

Both black and white can only force a draw, neither can force a win or loss.

White CANNOT force a win.
Reason: white and black start on the same color. A knight's jump always lands on a different color, so white (which goes first) will never be able to land on the same color black is as. Therefor it cannot capture black.

Black CAN always force a draw
Strategy is to exactly mirror white's move around the center point of the board. Due to it being an 8x8 board, they can never meet in a common center point. Due to having to increase distance to center point , they'll pass into a no-win scenario.

White CANNOT force a loss, if black has the option to force a tie.

For the others, I've made the following visual aid, to track where white can end up after a given amount of moves: 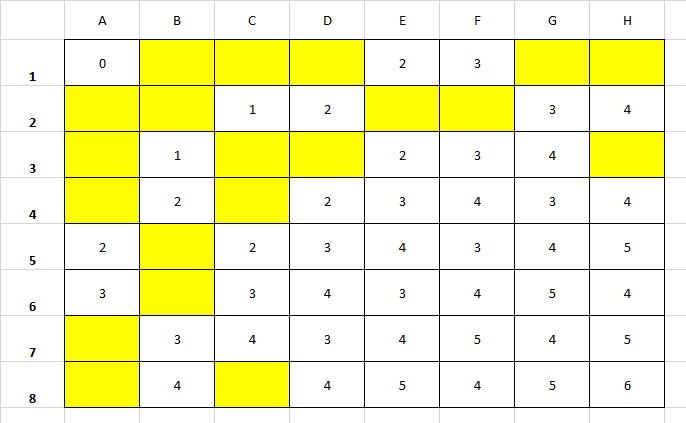 Note now, also related to the colors, and due to the 'no returning closer to starting point', some diagonal lines appear. This knowledge might make the rest easier.

Now, we combine the grid with where black can be at after a given number of moves (note: positions of black are given in green numbers, squares it cant go in red, squares both can't go in orange): 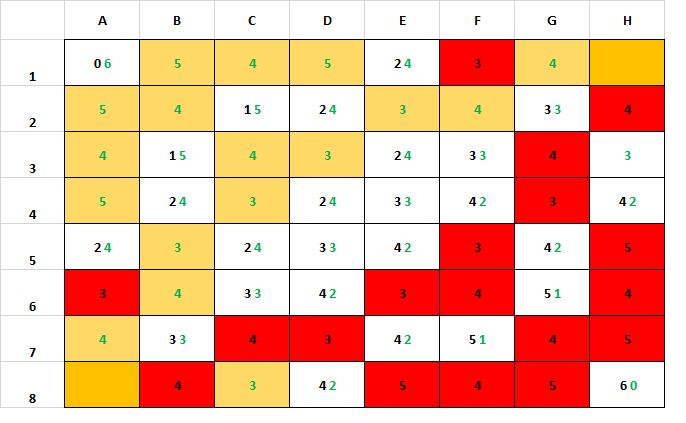 (toned down yellow for readability on the green)

Now to try and crack the remaining questions (3,4 and 5):

No. If white can force a tie as decribed above, black cannot force a win.

the first player is doomed to lose 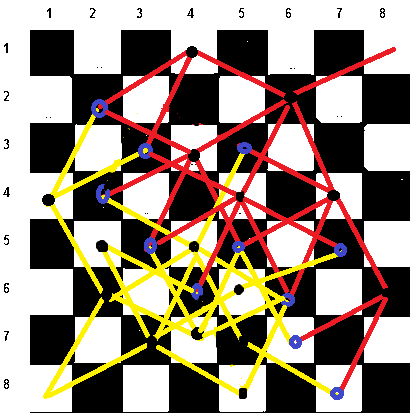 Not the answer you're looking for? Browse other questions tagged strategy game chess knight-moves or ask your own question.

3
Can more than 24 knights of each color be placed on a chessboard without any pieces attacking opposite color?
31
Switch The Knights
22
Desegregate the Knights
7
Seven Impatient Knights
6
The Knight Checker or Football Chess
14
Knight Checker Puzzle
6
The Faerie Army is coming!
11
A knight chased by three knights
9
A knight chased by four knights
4
Doubled Knights redux