You have blocks in five colors (red, green, yellow, blue and black - or 1 to 5). Each color comes in two varieties: a cube and one as big as two cubes stacked atop each other (sizes 1 and 2).

You are supposed to use them to build two towers next to each other such that two blocks of the same color (in either tower) are separated by the sum of their heights. For example:

Note that this only says that each color must repeat within a given distance, but not that every block of the tower must be of a particular color, so you get white blocks to fill any holes (they don't do anything else, and they aren't subject to any of the rules above or below).

You don't know how high the tower is supposed to be, hence give the shortest repeating pattern that can be used to extend such a tower upwards for any height. Within that pattern, each block of each size and color should repeat an equal number of times (ignoring white, of course).

Now if that were all, finding a solution would be simple, e.g. this one:

However, in the pattern of each tower each block size of a color should be opposite a block of each other color in the other tower. The above example doesn't fulfill this: consider the blue 2-block: while it occurs on the left opposite to the black 2-block, but never vice versa, and never opposite to the green 2-block, nor does the blue 1-block occur opposite the black 1-block.

Thus for any pair of two colors (not involving white and not both colors the same) the following patterns must occur (given as example for red and blue):

Note that in 3 and 4 they don't need to be perfectly lined up and in 5-8 the small one doesn't need to be at the same height, but there must be one box in which they are opposite, so e.g. for 3 and 5 these are alternative examples:

An Example with Two Colors

I can find a pattern for matching little blocks to little blocks, big to big, and big to small. The (small x small) and (big x big) towers fit together. However, it is not possible to connect the mixed tower. This stems from the fact that adding a big block adds +1 spacing but also adds +1 spacing requirement so the net gain is 0. I feel like I'm playing chess and I'm trying to get a bishop to the opposite color square. 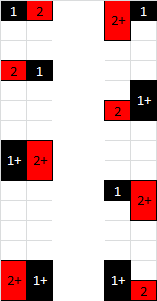 An Example with Three Colors

I believe this may not be possible.

Again, I can find small x small and big x big that all connect but the mixed, although it is valid by itself, can't be connected to the rest.

An Example with Four Colors

I believe this is also impossible.

Again, I can find small x small and big x big that all connect but the mixed can't be connected to the rest. In fact, I couldn't even finish the mixed tower.

I was unable to integrate the following pairs into the mixed tower:

If I understand the problem correctly, then a weak lower bound would be 60 blocks tall.

What's shown below complies with the rule about pairs of colors being opposite each other but with no regard to the rule about them being spaced apart by the sum of their heights. There are no repeated pairs and no white spaces so I am confident that this is the lower bound. If it is possible to rearrange these to meet the final rule, then the solution would be complete. Otherwise, we must begin inserting white spaces as needed. (The tower is shown broken into pieces that can be stacked upon one another without any white space. This is merely for formatting.)

However, even the four-color pattern is 131 blocks tall and it doesn't even meet all the requirements. I suspect that the five-color solution (if it exists) will be taller.

A block's color field encompasses both towers and spans three block lengths (for both singletons and doubles) - the block itself and one span beyond either end.
The rules of tower-building are then equivalent to the following:
- Every segment of both towers must be covered by color fields of every color.
- Color fields of the same color may not overlap.

From this it is plain to see that each color must cover the tower with density $\frac{1}{6}$.
Moreover, since sections of color field are either 3 or 6 segments long, the blocks of any individual color are constrained modulo 3. In fact, all singletons of a color have the same height modulo 3, and doubles of that color must occupy the other two residue classes.

25
Create a Word Search
6
How many function blocks do you need to make a controller?
12
Stepladder Game, Introduction and Puzzle 1: Turning
6
How to fill $4320$ multiplicative semi-magic square?
9
Connect the wires without setting off the bomb
3
Universal bisectors
3
Chess Construction Challenge #9: Two Eggs & A Flood
4
Longest chain of checks and captures
2
Make a topological torus-with-a-hole out of congruent squares that may share an edge or a vertex with other squares
9
Symmetrical Chess Position With No Legal Moves