Spiders and Invisible Ant on a Tetrahedron

There are three spiders and an ant on the edges of a wireframe regular tetrahedron. The spiders all move at the same speed, which is faster than that of the ant. Though the ant can always see the spiders, the ant is invisible. A spider can only detect the ant by being on top of it, in which case the ant is immediately eaten. Show how the spiders can catch the ant.

This is rather similar to an earlier puzzle I posted. The differences are that the cube is now a tetrahedron, the spider's speed increased from $\frac13$(fly's speed) to (fly's speed)$+\varepsilon$, and the fly is now invisible. The first two changes greatly help the spider, but this is still a harder puzzle. 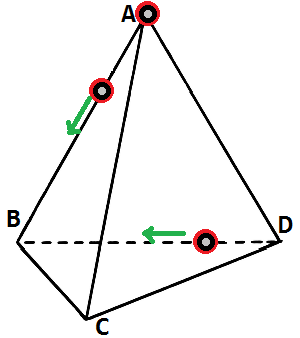 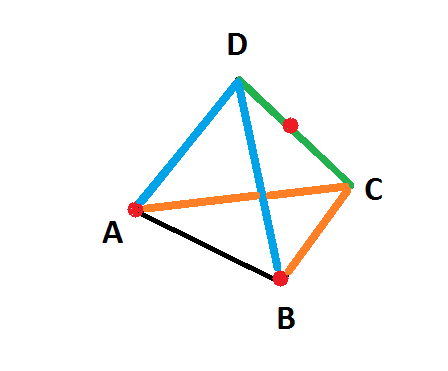 One spider stands still in A, another spider stands in B. The third spider (let's call him Bob) is the only one moving.
First of all, Bob checks if the ant is between A and B.
If not, he moves to the edge CD (as shown in the picture). Now, the ant has to be on a blue edge, on an orange edge, or on a portion of the green edge, with a probability of $p=\frac1 2$ of being in front or behind Bob.
Now, Bob moves to D, then chooses a random edge to explore between the two blue ones: if the ant is on a blue edge ($p=\frac1 2$), then Bob has a $\frac1 2$ chance of catching it after choosing the path. After all, he got a $p=\frac1 4$ chance of catching the ant starting from the edge CD.
If the ant survived, Bob goes back to CD and does the same thing with orange edges.
If the ant survived again, Bob goes back to CD and repeats with blue edges.
And so on, until he catches the ant (he has a probability of $p=1$ of catching the ant after an infinite time!

Not the answer you're looking for? Browse other questions tagged pursuit-evasion or ask your own question.

13
Spiders and Ant on a Cube