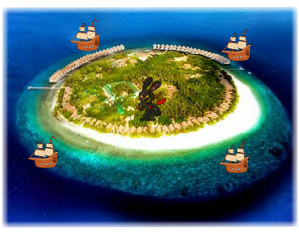 6
Finding treasure on a circular island
32
Ernie and the Island of Stability
19
The Pirates of Beal Isle - very long logic grid puzzle
14
Pursuit Problem II: Surrounded in Marauders' Circular Cove
20
Trapped in my Cellar
3
Water island puzzle
10
Island of Liars
2
The treasure on a tropical island