If you care about the story, you may want to see Part I if you haven't already. Otherwise, just enjoy the puzzle!

Ricky: Chris!
Chris: What is it this time?
Ricky: We have another problem.
Chris: Another problem? I can't solve all your problems, you know.
Ricky: But-
Chris: (sighing) Just say your problem.
Ricky: So we found the temple, and entered a large courtyard. The door to the temple, however, is locked, and seems to be resistant against the tools we have available.
Chris: How can I help?
Ricky: A careful reading of some text we found on a pillar in the courtyard says what we have to do. But I'm unable to do it. It seems to be some logic game - here, I'll explain it to you. (pulls out a roughly drawn diagram from his pocket)

Ricky: The courtyard is made up of a grid of square tiles. Each tile has a lantern embedded into it with four slits which let light escape facing up, down, left and right. These lanterns can be extended to provide light or retracted to produce no light. Whenever you choose to extend the lantern of a tile, light pours out of the four slits. We mark this light using a number - the lantern itself is 5 units bright, and every tile the light travels it loses a unit of light until it reaches zero. You can see this from the left diagram.
Ricky: However, the right diagram is more interesting. You see, when two or more paths of light intersect, their light values add. And if they hit a pillar or wall, the stream of light is blocked. It is also interesting that the lanterns themselves can be lit above five as the light from other lanterns passes through them.
Chris: This is all very well and good, but what's it got to do with opening the door?
Ricky: The courtyard of the temple has a puzzle in it that, once solved, will open the door. The courtyard has a ten by ten grid of tiles in it, each with a lantern embedded into it and a number written on it. We just need to extend the right lanterns so that the units of light for each square matches the number written on it.
Chris: That surely can't be so hard?
Ricky: You would think so. However, there is one problem that prevents us from solving this ancient puzzle... (trails off)
Chris: Which is?
Ricky: Maybe it's better to show you. (pulls out a diagram from his pocket) 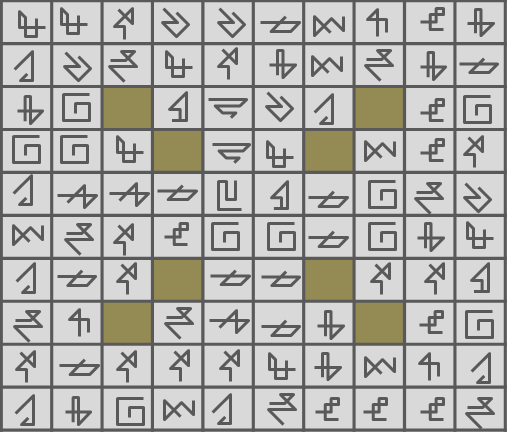 Ricky: The tiles' numbers are written in an ancient language. We can't translate them. All we know is that one symbol maps to one number.
Chris: (rather desperate) Is there anything else you know?
Ricky: No. Wait - actually, there is. We know the following symbol - (points to the diagram)

Ricky: - means zero.
Chris: Well, this is certainly a challenge. But surely it can't be as bad as reconstructing that map!

Can you help Chris figure out which lanterns should be extended?

I got the solution ($O$'s for extended lanterns):

I'll explain, in short, how I filled the grid:

Started with the cell to the left of the zero on the top row - only one light can be incident on it if the other cell is to remain zero. That symbol must therefore be 1. The rest was number-crunching. I'm sure there was a better way to do it, though! (and a better way to represent the result)

15
Enlightened, Part I: Finding the Temple

36
Escape the dungeon, by deciphering the codes and navigating the rooms to find a way out
15
Enlightened, Part I: Finding the Temple
43
The Persistence Of Memory
17
The Collapse of Memory
8
Trick or Treating in Trutham-And-Ly
16
Hot Spring Homicides - the unlucky 5
41
Amnesiac in a ring shaped palace
28
Out of these 20 Doors, Which One Leads You to the Jackpot?