There are 4 identical tumblers each filled with the same number of 1 kg balls. One of these four tumblers contains all defective underweight balls. You have a weighing scale which you can use to weigh the tumblers, but it can be used only once.

How can you figure out which tumbler contains the defective balls?

Note: The tumblers are not transparent, but it doesn't matter, because the underweight balls look and feel the same as the genuine balls anyway. Underweight ball can be between (0,1).

I am not the original author of this question. This question was asked in an interview to my friend and he agrees that this is not solvable until and unless there are restrictions put on the underweight quantity. I don't wish to modify the question now and have accepted the answer which concurs with this.

I don't really see how this could be solved without further restrictions. Let's look at a simplified case where we have to pick x balls from one tumbler, y from another, with one of them containing the defective balls. We get the following:

No matter what you pick for x and y, if both are at least 1 then intervals will always overlap. If the scale shows a number within the overlapping part then there isn't a solution. As an example, for x = 2, y = 5, the first range is 5 to 7, the second range is 2 to 7. Getting anything above 5 and below 7 doesn't tell us anything.

Since the weighing scale can only be used once, I feel free to disassemble and modify it.
Now, tie a ball from each tumbler to the 4 vertices of the weighing-scale, as shown in this picture: 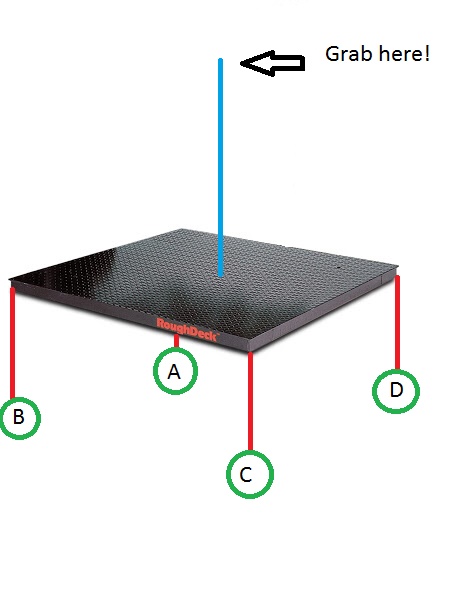 Now, pull up the structure and see how it tilts: the highest ball from the floor is the lightest one!

Take 4 balls out of one, 8 out of another, 12 out of a third, and 16 out of the last one and weigh all tumblers together. Based on how underweight the scale reads, you have your answer.

Place all four tumblers on the weighing scale, but on there sides. By tilting and rolling off tumbler by tumbler, you would be able to find the defective one. Assume by chance it were the first, a weight of 3kg would be displayed upon rolling off. If the decimal value after first, continue. If second, 2kg displayed, if third 1kg and if last, it wont be a whole number. I guess this way you are only using the weighing scale once.

4
A balance with three pans, detecting the lightest pan (find the two heavier balls)
7
Find 2 heavy fakes among 11 coins on a 3-pan balance
2
Find 2 heavy coins among 27 with a 3-pan balance
3
Another 2016 coins and a balance
31
15 Balls Sorting
4
Are there basic weighing puzzles requiring adaptive strategies?
15
10 coins, 3 of them are fake
2
3 bags of coins, find which bag contains fake coins, doing only 1 weighing
30
Are all balls the same weight?