Spiders and Ant on a Cube

There are three spiders and an ant, crawling on the edges of a wire frame cube. The spiders can crawl exactly one third as fast as the ants. Show that the spiders can catch the ant.

Think of bugs as point masses, and a spider catches an ant when they are in the exact same location. Any bug can instantaneously change direction. Everyone can see each other at all times.

A more simplified/intuitive way to think about it is if you have the following:

No matter where the ant and spider start, the spiders go into this formation: 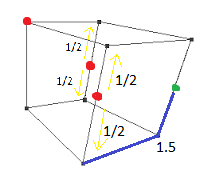 Where the red dots are the spiders, and the green dot is the ant. Notice how the two red spiders on the edges of the cube will only move up and down. This prevents the ant from getting across to the other side without being eaten!

The spiders will have to move at most 1/2 a cube edge length to get to the corner. This means the ant can move a total of 1.5 cube edge lengths before the spider blocks its path. The ant being smart can try to prevent this setup by not going on the edge center (as shown in the picture), however the spiders only need to maintain/setup the ratio with the ant. So the ant may pass the half of the cube a few time, but then the spiders will have be able to 'sync to the ratio' with the ant.

How do the spiders get in sync you ask? Well, every time the ant walks one direction, the spider is crawling its edge to try and reach this magic ratio (which means he is behind where he should be). But as soon as the ant reverses direction, the spider can stand still until he is no longer 'behind' where he is trying to get to and is in sync with the ratio.

Now that the ant is stuck on the one half of the cube, the third spider can walk along towards the ant and trap him towards another spider!

All the spiders start by holding a strategy meeting at $D$. They then split up, and travel until spider $a$ is at $A$, spider $b$ is at $B$, and spider $c$ is at $C$. If they have not yet caught the ant then they make a solemn vow to never let the ant reach any of the edges $AD, BD, CD$ alive, and then they move on to the second phase of their plan.

In phase two, spider $a$ restricts itself to walking back and forth along edge $AX$, spider $b$ along $BY$, spider $c$ along $CZ$. Each spider is trying to catch one of the ant's three "shadows", called shadow $x$, shadow $y$, and shadow $z$.

Eventually all the spiders successfully catch their corresponding shadows without breaking their vows. If the ant is on any of the edges $AX, BY, CZ$ at this point, then it is already dead. Otherwise, they move on to phase three.

If the ant starts phase three on edge $CX$, then spider $a$ and shadow $x$ will both be at $X$ and spider $c$ and shadow $z$ will be somewhere along $CZ$: spider $c$ now rushes straight back to $C$ before shadow $z$ can get there and then along $CX$ to meet spider $x$, and the ant has no hope of escape. Similarly if the ant starts phase three along edge $AY$ or edge $BZ$ it meets a grisly fate.

Not the answer you're looking for? Browse other questions tagged strategy pursuit-evasion or ask your own question.