Enlightened, Part I: Finding the Temple

Some time in the future, humanity discover a planet which once held an alien civilization. This civilization is long gone now, and only the empty structures remain, a testament to the achievements of their society. By working out the language system the aliens have used, researchers find several references to a temple built in the rocky wastelands, that contains the most sacred doctrines of their people. This is a story about recovering those doctrines.

Ricky: Chris! We have a serious problem!
Chris: What's up?
Ricky: Our map of the rocky wastelands are shredded, and the logs are ruined!
Chris: What map? What logs?
Ricky: (sighing) You don't know about the map, do you? Fine, I'll explain.
Ricky: We have a very strict protocol for exploring the wasteland. We send out groups of men, distinguished by a color, and get them to write logs about where they go, and what landmarks they find. Then, back at base, because we know where they started, we can construct a map showing their starting position and the landmarks they found. Here, I've got an example in my pocket- (rumbles around)

Ricky: And sometimes we abbreviate this like so... (scribbles on a piece of paper)

Ricky: This then allows us to draw a map back at base: 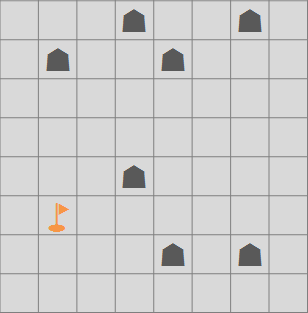 Chris: Ok, I get that. How is it relevant, though? What happened?
Ricky: Well, yesterday we sent out four teams to survey the area where we thought the temple might be. They all came back, we collected their logs and made a square map. It was late, and I hadn't had much sleep, so I put both the logs and the map in a folder and went to sleep. However, when I woke up - (pauses) - the maps and the logs had been sabotaged.
Chris: It is salvageable?
Ricky: Well, I'm not sure. That's why I came to ask you. You see, the map had been cut in a most mysterious fashion - into twelve identical L shaped pieces. I'll show you - just wait a bit. (dashes out, and comes back with a whole lot of paper)
Ricky: Have a look at this. 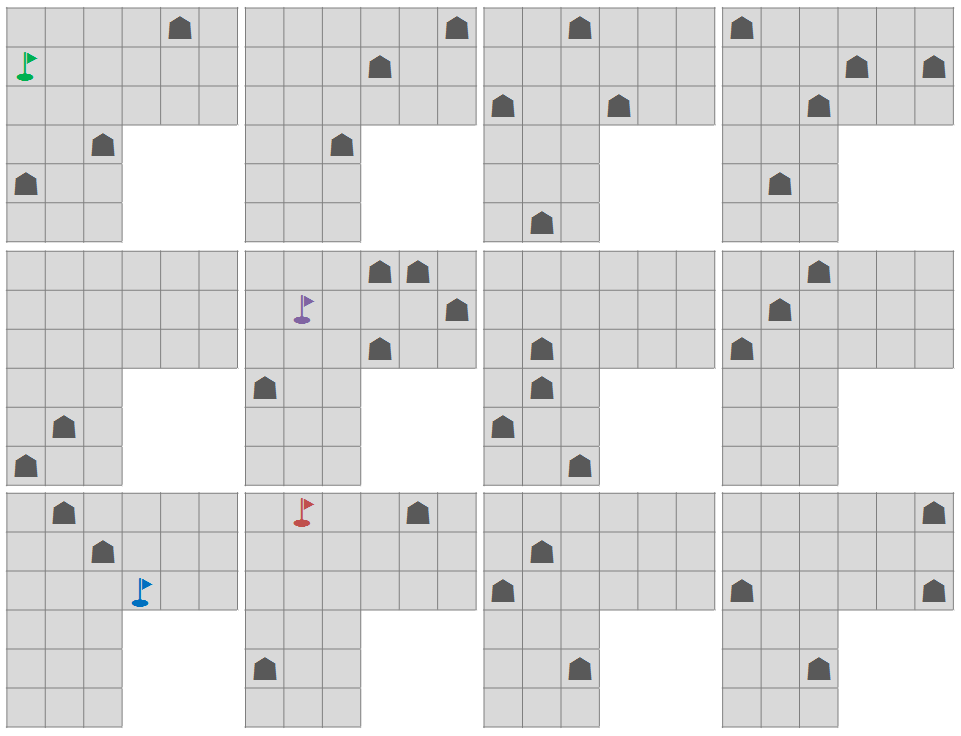 Chris: I don't see how those could fit into a square.
Ricky: Some of them have been rotated.
Chris: (slowly) ...oh.
Chris: But surely you can just reconstruct the map using the logs?
Ricky: That's just it. Some of the text off the logs has been removed. I'll show you what's left.

Ricky: Those question marks could be anything from 1 to 17, as far as I'm concerned. I don't remember what the numbers were before they were erased!
Chris: It still looks possible to reconstruct it... I think.
Ricky: That would be good, because the green team told us that the last landmark they visited was the temple we were looking for. Oh, you should know one more thing... (trails off)
Chris: What's that?
Ricky: I didn't write the compass directions on there. So I don't know which way is north.
Chris: ...

Can you help Chris reconstruct the map?

The solution is below: 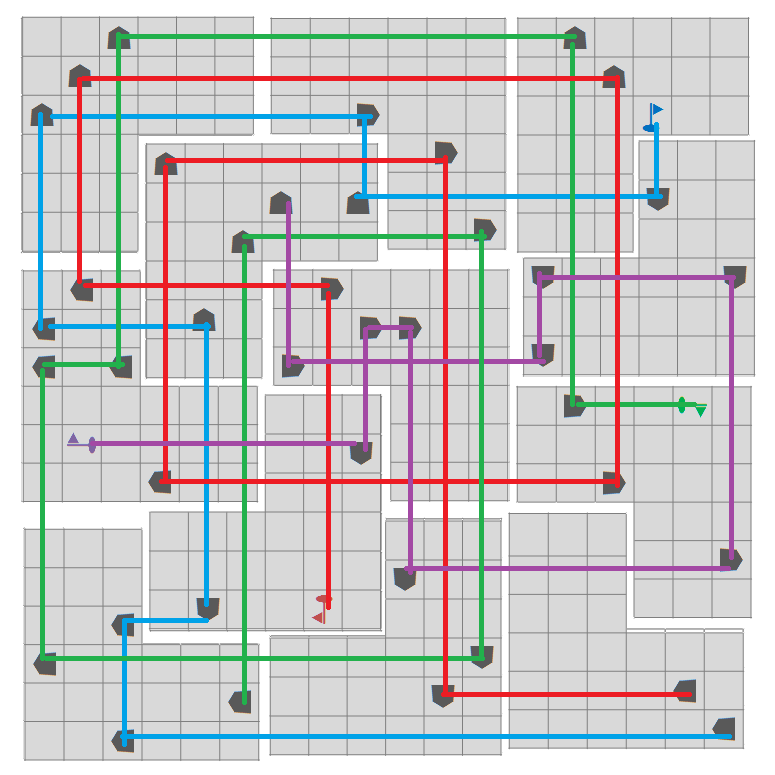 The first tile to place is the one with the blue flag. It must be oriented like an "r" so that it can go south 2 and hit a landmark. It must be in the upper right as it manages to go extreme distances east and south without the possibility of going extreme distances west or north in between.

Simularly one can determine that the tile with the green flag must be on the far right and somewhat down. It must be oriented and positioned where it is or else the additional tiles around it cannot be placed to make the square.

The next major step was to find a pairing of tiles which could allow for landmarks in one of the 8th through 12th columns from left and the 3rd and 5th rows from the top. This was mostly done by process of elimination based on the green and blue paths. Which ever tile bordered the top could not have any landmarks in the 1st row. It could not be positioned as an "L" or there would be space a tile could not fill. It could not be positioned as a "r" or backwards "L" as no tiles fit the bill and did not lead to later complications. When the 1 tile shaped as a backwards "r" with an empty top row was tried, the top left tile was identified. From there, the final tile shapes were pieced together.

When I figured out the final tile arrangement, I assumed the blue path touched the landmark in column 5, row 8 as that was the only way I could see for it to go down 10 more squares after hitting a landmark 4 to the east. The tile with the red flag was the only tile where a landmark was 7 south of the previous blue landmark. This meant I had placed all 4 starting positions. The remaining tiles were added in as the paths were drawn, I can elaborate further if need be but the remaining placements were trivial.

3
5 logicians with 1 or 2 hats (Part II) [8,9,10]
7
Enlightened, Part II: A Curious Courtyard
16
Hot Spring Homicides - the unlucky 5
5
There's been a kidnapping! Part 2
1
Is it a puzzle or not?
17
Bizarre Love Triangle
4
What's the problem with the prisoner to be hanged logic puzzle
3
Perambulating ants 2
0
The Primordial Ones