Tiling a Hexagon with Diamonds

A regular hexagon is divided into a triangular grid, and completely tiled with diamonds (two triangles glued together). Diamonds can be placed in one of three orientations. Prove that, no matter how the board is tiled, there will be the same number of diamonds in each orientation.

Here is an example of such a tiling. Though this hexagon has 5 triangles to a side, the problem asks you to prove this for any size hexagon, and any tiling of it. 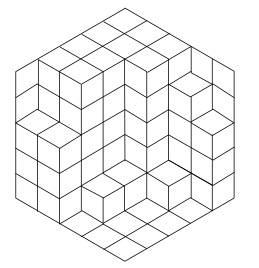 This is one of those puzzles that has many solutions, so I'm very curious to see what people's favorite approaches are. Therefore, I'm going to hold off on accepting an answer for a while, to try to get as many different solutions as I can.

Since none of the paths intersect, every path between the left and right sides of the hexagon has to start and end at the same height. Therefore, every path must contain an equal number of each of the two differently oriented tiles with vertical sides. Since every tile with vertical sides lies on such a path, the total number of these two differently oriented tiles must be equal.

Repeat this symmetrically for two other orientations to find that the number of tiles of each orientation must be equal.

I want to post an answer that is more intuitive than mathematical.
This picture perfectly represents it: 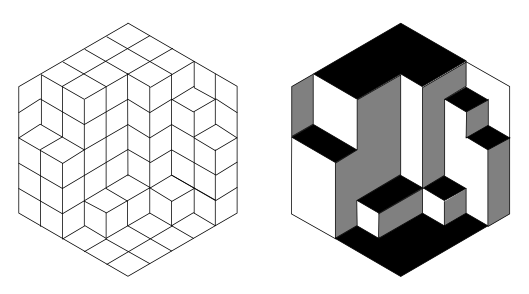 White, grey and black are used to highlight the diamonds with the same orientation. The right picture shows a weird solid, I guess everyone can see it.
Well, it's intuitive to see that, for any configuration, the black area is equivalent (white and grey as well): it's like extruding parts of your floor (aka building stairs!), the area on which you can walk doesn't change!

Interestingly enough, looking at the image as a 3d graph, you can see that each "face" has the same number of tiles. So, if you looked at it from the left, you'd see 25 squares. Top, 25 squares. Right, 25 squares. And each of the 3 orientations corresponds to one of the faces.

Take any tiled hexagon, and look at its vertical lines.

First, observe that due to the shape of the tiles, all vertical lines must have the same length as the left and right side of the hexagon, possibly with gaps in between.

So, if none of them have gaps, and all of them end at the bottom, the entire tiling has to look like this ("completely filled cube"): 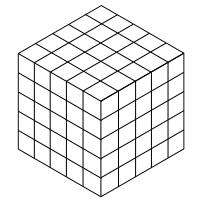 We show that it is possible to transform any other tiling into a "completely filled cube" without changing the number of tiles in each orientation.

First, select a fragment of a vertical line that doesn't end at the bottom. It has to end at a horizontal tile instead, as the other two tiles both have vertical sides. Hopefully, the situation looks like this ("corner"):

But maybe there are one or two additional lines originating at the same spot, like this:

If that is the case, follow one of them. It must belong to another horizontal tile adjacent to the current one. (You can see this from the picture.) So after following the line, you are in the same situation again, but closer to one of the sides of the hexagon (which guarantees termination, since there is definitely a vertical line in the direction you just came from). Continue in the same direction until you reach a "corner".

Now that you have reached a "corner", "fill it":

Obviously, the number of tiles in each orientation has stayed the same. However, a vertical line fragment has just moved downwards.

Repeat this algorithm until all vertical lines end at the bottom and all gaps are removed, resulting in the "completely filled cube" (see above).

Yet another; this one is triangle-based and might be more of a standard proof.

Divide the entire hexagon into triangles and assign numbers to the vertical lines like this (or similarly): 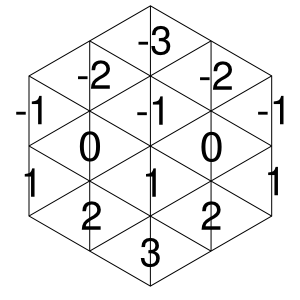 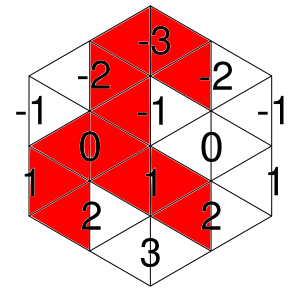 Now, build a tiling piece by piece, and consider the "degree" of the resulting shape. Adding a horizontal tile does not change the degree, adding one of the others increases or decreases it by 1, respectively:

Since the entire hexagon has a degree of 0, the number of the two tiles shown must be equal. Repeat symmetrically in another direction.

Here's my attempt to prove it.. It seemed impossible until I finally exploited a trick.

I start from a valid configuration where there's only one change possible (rotating the 3 semilines in the middle: any other change would at same time change number of diamonds an create triangles.) 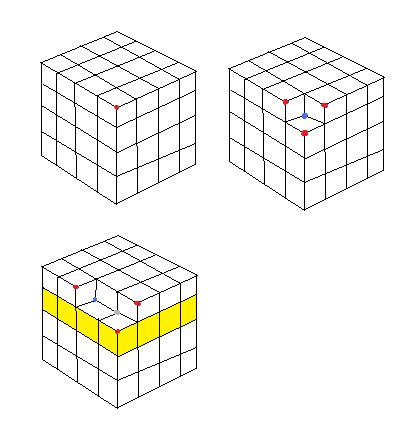 Once you do that change you are free to undo it (useless, I'll mark it blue) or to do other 3 changes (in red). You immediately note that you can do that "change" only on points that have lines placed like the middle of the first move, or the middle of the initial cube.

Once you do your 2nd move you'll be unable to undo the first move (grey now) because doing so would create triangles and other shapes. 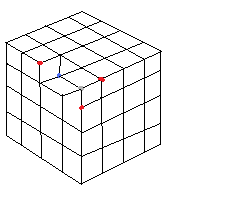 (Assuming my first move was a clockwise rotation of 1/6 round, my undo is a 1/6 anti-clockwise)

Basically you can just check that the only possible moves are rotations of group of tiles made by 3 diamonds (1 for each orientation) (you can check all possible moves on a 2x2x2 "cube" and see that is true).

Hence you note also that rotation keeps number of diamonds for each orientation the same.

There's a little piece missing of the proof: I did not show that starting from my first cube I can do all possible tilings, that's because rotations have "inter-dependencies" and I don't know if at some point "I'll get stuck" without more possible moves.

I'm too sleepy for that proof, but I developed another proof method I'll let you the pleasure to use it: 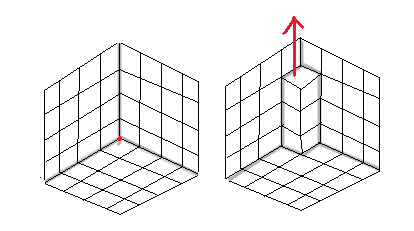 You have now a way to compute really all possible tilings. You start with the backmost column, and once decided a height you can extrude the 2 neighbour to any height lower or equal to the backmost column. After that you can do the same for the next 3 columns.

There is no dependency on rotations here. You choose a number, and then you can choose again same number or a lower number. That's much easier but have some help from imagination (3rd dimension in a problem that has 2 dimensions).

The key seems always to be the same. Starting from a trivial configuration the only possible moves incidentally preserves the number of diamonds for each configuration.

I have never seen that puzzle before. Hope you like my first answer in puzzling exchange.

The total number of diamonds (aka area) lets us make this equation:

Imagine the $S=1$ hexagon... There are only 2 solutions which are the same one rotated by 30 degrees. There needs to be all three diamonds present in order of the central portion to add up to 360 degrees.

We can imagine that there are 3 paths which proceed from the top to bottom, upper right to lower left, and upper left to lower right corners. The total movement down for any path you follow (top to bottom) must be equal to $2S$ but the movement left to right must be zero. If you move the whole way down on an $A$ diamond, you do not move right or left. If you move down on a $B$ or $C$ diamond you move right or left respectively. In order for all paths to not move left or right, the total number of $B$ and $C$ must be equal. If you rotate the graph 60 degrees such that a different pair of corners point up/down, you can show this for $A$ and $B$ or $A$ and $C$.

Not sure this is a full answer but I'm getting tired. 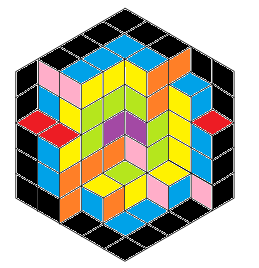 Let n = number of triangles to a side. Take the diamonds touching EDIT: n+1 adjacent edge units (just at 1 point doesn't count): At least one diamond must be different from the others. Let all the changes happen in the corners, with a change at every other corner. We've made a loop which can contain a hexagon with side length n-1, and the number of diamonds of each kind is equal. Induction down to n = 1, where it's obviously equal.

Now let a hexagon outer loop deviate from our "changes only occur at corners" policy. Color all of the outer edge-adjacent diamonds a certain color (say, black) and leave any diamonds that jut out from this loop white. Now we can see a broken loop surrounding another (certainly broken) loop of n-1. Color in this inner loop with a second color, again leaving all rebels white. Do this down to the n=1 hexagon, then color the rebels by orientation.

Now if you look at my diagram, the inner purple hexagon really wants a red tile at bottom instead of an orange and a pink. Imagine this is a mosaic. Rip up a red tile and the orange and pink rebels in the middle, and put the red tile there. The purple hex is happy now. Now make the green hex happy (a change only at every other corner) -- The bottom sideways diamond wants to be two slanted diamonds to fit around the purple hex -- add in our orange and pink tiles to the side, putting the green tile wherever we robbed the red tile from earlier. I think it's clear that this process can be continued until we reach our "optimal hexagon". My brain is too fried to prove this definitively, though.

EDIT: I believe these two things are true: 1. If we take a non-optimal hexagon, every concentric loop will be unhappy. 2. Fixing an unhappy loop necessarily adds tiles to our 'hand' of removed mosaic tiles. 3. To fix the innermost hex, rob any appropriate rebel.

With these two things in mind, it's impossible that we will want to fix a hex but will not have tiles in our 'hand' of removed tiles, assuming that there is at least one rebel of the kind needed by the n=1 loop.

From the triangular tiling with a 'cube boundary', we can see that:

There is no need for long proofs. Think 3D.

Imagine that some cubes are fixed in a corner of a room. The three orientations are the faces that we see since from every side we need to see the same number of faces.

Whatever the way you tile them, you'll need S / s diamonds.

Not the answer you're looking for? Browse other questions tagged geometry combinatorics tiling or ask your own question.