There are $13$ coins arranged in a circular fashion.
Andrew and Bill play a game with these rules:

Assuming that both players are smart and play optimally, who wins?

An example is shown below: 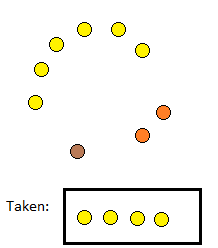 The brown coin cannot be taken with the yellow or orange coins as it is not adjacent anymore. Similarly, one or both of the orange coins can be taken, but not with a yellow coin or the brown coin.

This puzzle is NOT the 20 coins on the table!

The answer is mostly taken from the Math.SE site as linked above.

If the game has two separate piles of the same size, the player to move loses as the other player can mirror his moves.

If there is a cyclic ring, the first player's move will make a chain as just described.

By this the second player will always win for a size 13 circle.

The first player has two choices: take one coin, or take two coins. In perfect play, the second player will always take the opposite number (or the same number in even-numbered coin starts), directly across the circle, dividing the remaining coins into two equal groups.

At this point, there are two identical sets:

I will talk about the chain case, i.e. all coins lie in a row. In the circle case, the first move breaks it into a chain.

This is then the octal game with signature $0.77$, also known as Kayles.

So the only losing position for Kayles is to start with zero coins. Therefore in the chain version, the first player wins if and only if the chain contains $1$ or $2$ coins.

Originally I said A(ndrew) won, by using a theory of how many coins are remaining to determine where (and how many) to take, but that was wrong.

I was considering doing something with groups of 6 (after taking 1) but then they merge, so that is an issue, especially if 2 coins are taken from the middle of the remainder.

35
Coins on a table
8
Coin inverting game
7
A Game with Strings and Coins
15
The Trickster's Game
14
Twenty coins and no balance
14
Removing chips from the table
8
A matchstick game
4
Perfect strategy for the 2nd player in 'The coins on a table game'
3
Which player wins in this takeaway game?
2
Coins in a row, without the usual restriction