The poster on the university bulletin board is definitely trying to drum up some hype:

Be one of the privileged individuals present when Professor Hubert J. Farnsworth reveals his new research regarding the secret movie codes! Never-before-heard secrets will be revealed!

Tonight only, in the main lecture hall.
Admission is $50.00/person. Presentation begins at 7:00 p.m. sharp.

Professor Farnsworth is head of the university's Film Studies department. You've always thought he's a bit of a quack, but his classes are very popular. Over the last couple of weeks the buzz has been building that he's made a spectacular discovery, but no one's sure exactly what it is. He's been very obviously carrying a locked briefcase everywhere with him, which is purported to contain some revolutionary new research that he's been working on.

You determine that there's no way you're paying $50 just to hear some crackpot spout gibberish for a couple hours, and are about to head to your next class when you hear a scream from the classroom down the hall.

Running toward the sound, you see a hysterical student standing at the classroom door, gibbering. Inside, the body of Professor Farnsworth is sprawled across a desk, and blood is everywhere. His briefcase is nowhere to be seen.

Suddenly, you notice that Professor Fansworth is still moving! He's beckoning you towards him. You quickly run towards him, trying to recall anything you can from the first-aid class you took several years ago. As you get close, you see the number of stab wounds in his chest and the size of the blood pool underneath him, and realize that there's little chance of saving him. But he desperately wants to tell you something. You lean close to him, and he manages to get out the words, "Read the board," before dramatically expiring, just like in the movies.

You glance at the blackboard, and notice a bunch of numbers. Apparently he wrote this after he'd been stabbed, judging by the number of blood smears on the blackboard. Unfortunately, the numbers hold little meaning for you. 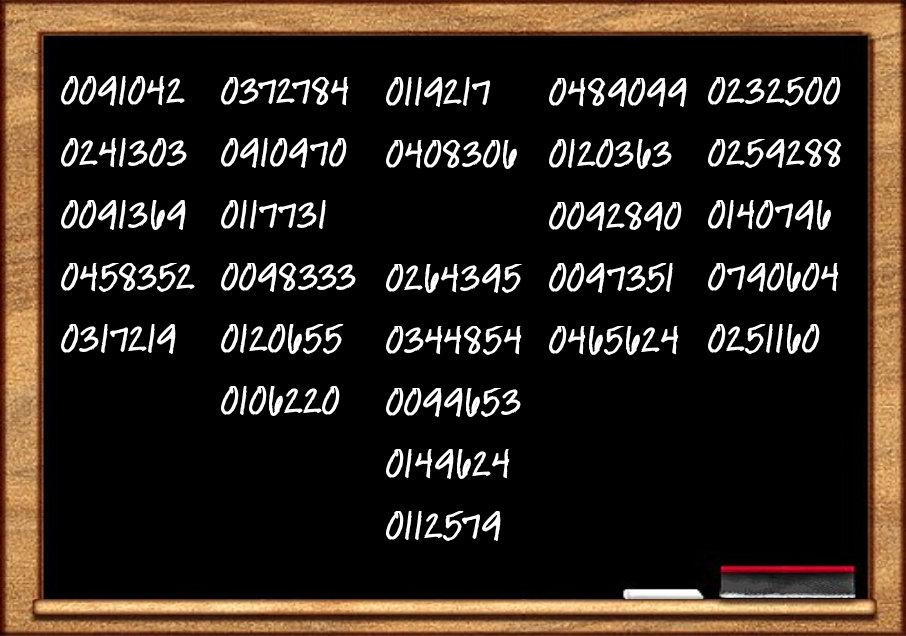 The police arrive shortly thereafter, and take charge of the scene. They are very eager to interview you, since you were the last one to speak to the professor. The officer interviewing you is remarkably candid, and shares some of the details of the case with you.

Apparently there were six other professors who were experts in a similar field, and were all in town for the "big reveal" tonight. They are the prime suspects in the murder investigation.

The police are fairly certain that one of these men stabbed poor Professor Farnsworth to death and stole his research, but they have no evidence pointing to any of them.

Can you decode the blackboard message and help the police track down Professor Farnsworth's killer?

IMDB is your friend.

Look at the lengths of the titles of each of the results you get after using Hint 1. Ignore spaces and punctuation.

With the pretext being about secret movie codes

This makes the message

you get this message by:

Since Andrew Smith managed to get the answer in a way other than I intended (congratulations!), I'm going to post my own answer here to demonstrate how I intended for it to be solved.

First, the clues that Prof. Farnsworth studied film, and was obsessed with movie codes, leads us to figure out that each of the numbers on the blackboard corresponds to the ID number of a movie on IMDB (the Internet Movie Database).

Looking them all up gives us:

Then, we look at the length of each movie title (ignoring spaces and punctuation). This gives us a series of numbers:

Converting those numbers to letters (A=1, B=2, etc.) give us

THIRD LETTER OF EVERY FILMS TITLE

If we then follow those instructions, and look at the third letter of each title, we get

Which, when we rearrange the spaces, spells

Each number is the IMDB code of a famous movie (example), as clued by "movie codes".

Note sure how to extract. I was expecting to read off the first letters and get a message, or the 7th ones (clued by 7pm). I tried converting movie release years to letters, but that didn't give anything promising either.

Not the answer you're looking for? Browse other questions tagged enigmatic-puzzle story mystery movies or ask your own question.