In what field does $\pi^2=2$, where $π$ is the ratio of the circumference of a circle to its diameter?

Remember to think outside the box and that I am looking for a complete answer.

The above is to be taken more literally than figuratively and vice versa respectively.

The field spherical geometry.
For a small circle of radius subtending angle $\theta = 2.010311...$ radians at the centre of the sphere, the ratio between the circumference and the diameter measured on the surface of the sphere is $\sqrt2$. In this precise case we could say $\pi^2=2$.

Mathematically, I think the answer is

My first idea was simply

Here's an answer that goes in and out of figuration, becoming more figurative than literal and then more literal than figurative, stimulated by the hint.

The answer we arrrive at is that

the field is ancient Rome, or anywhere else that people have used Roman numerals.

The working is as follows.

the result of taking $\pi$, the ratio between the circumference and diameter of a circle, and getting it to operate on itself to give us a square. Alternatively, to square something is to make a square out of it.

let's get figurative. How do we make a square out of the usual figure for $\pi$? Easy. Start by making a copy and turning it round:

stick the rotated copy onto the bottom: 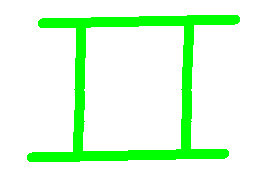 now made a square. It's got bits sticking out of it (outside of the box), but we've still made a square by getting $\pi$ to operate on itself. So we've squared $\pi$.

Go back to being literal. What have we got? The Roman numeral for the number 2. So we've squared $\pi$ and got 2.

I realise the usage of literal here is questionable. Another weakness is that the meaning of $\pi$, which the setter stresses, doesn't get a look-in. Nonetheless, the train of thought goes from meaning to figure to figure to meaning, which fits nicely with the hint and works as a way of getting $\pi^2$ to equal 2. 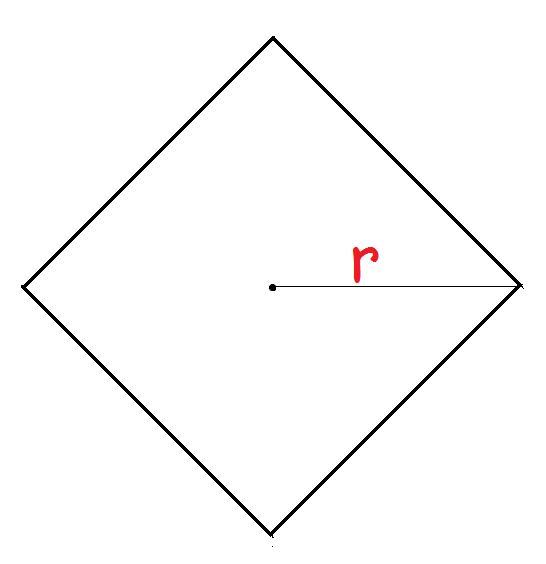 stupid me, I went to look for a reference to Wikipedia for the answer and found out I was almost right:

the Quantum theory often makes odd statements which turn out to be true for example: $1 + 2 + 3 + 4 + 5 + .... = -1/12$ (so counting up all integers to infinity equals minus 1/12th) Link for explanation
DISCLAIMER
As enforced by the police I have to add this is only true when used in several techniques called analytic continuation and Ramanujan sums. So stay in school kids, else the police will find you and they will correct you!

In a strong gravitational field.

Or any other similar non-euclidean geometry that is sufficiently warped.

This video explains it with a nice visual demonstration using strechy fabric.

Imagine a circular trampoline with a weight at the centre. The edge of the trampoline remains fixed but as the weight increases the surface becomes more curved. The distance in straight line following the trampolines surface from the edge to the centre (its radius) becomes greater. When it is finally curved just the right amount the the ratio of the circumference to the diameter will reach $\sqrt2$

The answer is Cooking, where the pie has a piece cut out...

Likely wrong, but I wanted to add a different angle to the question, i.e. move a bit further outside the box.

Could be the touch-field of a pocket-calculator or other technichal device where touching the "Pi" key twice gives you 2 ? (Haven't found an according calculator though, yet.)

I haven't looked at all the existing answers yet.
Has somebody already discovered this?

Don't know if correct, because " π is the ratio of the circumference of a circle to its diameter".

In physics, we sometimes use $\pi$ to mean the permutation operator that swaps two particles. If you swap two particles and then swap them again, you get back to the same state as before (...usually). Therefore, $\pi^2 = 1$.

The simplest answer would seem to be "boxing", if we consider a ring to be synonymous with a circle.

If the diameter of the square is its diagonal and the circumference is its perimeter then the square of their ratio is 2.

Not the answer you're looking for? Browse other questions tagged mathematics lateral-thinking or ask your own question.