Different lines according to weights

What was this invention which is still widely used along with its modified versions?

the Snellen chart, used by ophthalmologists to measure visual acuity: 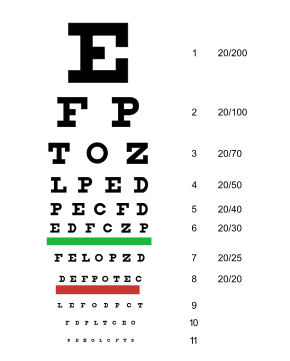 Throughout this description, 'people' is used in place of letters. The Snellen chart consists of multiple rows/lines of block letters, grouped by size. In any given row, all letters are printed in the same size/weight font.

In the first line, there was a fat man.
The weights of people standing in subsequent lines decreased.

The first line consists of one very large letter, i.e. a fat man. As you go down the chart, the font size/weight decreases.

People standing in the eighth line were considered normal and healthy.

Being able to read the eighth line of the chart from the standard distance of 6 metres represents having '20/20 vision', the standard considered normal and healthy, and used as a reference point for diagnosing long- and short-sightedness.

The Snellen chart is still used today, albeit not necessarily in the exact same form as when it was first created.