This puzzle is a part of Monthly Topic Challenge #2: IQ Puzzle Parody

Some time ago I sent a Flag Puzzle to my friend Brian. His response was..well not so friendly. So I took that as a challenge and turned the response into a different puzzle. Like an IQ test matrix.

Can you fill out the 2 blank boxes given the five choices? 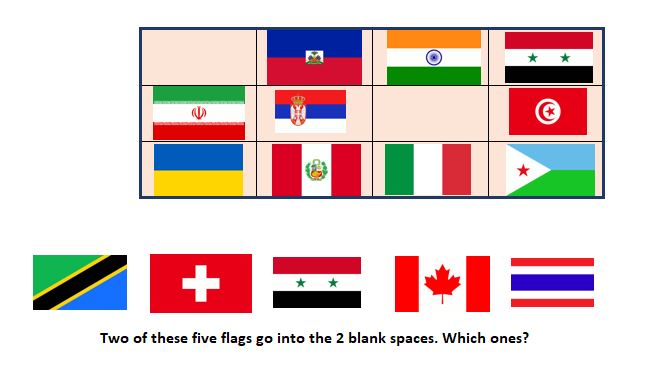 People from those countries

The country names can be identified from the flags in the grid as follows:
???? HAITI INDIA SYRIA
IRAN SERBIA ???? TUNISIA
UKRAINE PERU ITALY DJIBOUTI
Likewise with the options at the bottom:
TANZANIA SWITZERLAND SYRIA CANADA THAILAND

Reading the first letters of the countries in the grid gives "?HISIS?TUPID". It can be assumed that the phrase is supposed to read "THIS IS STUPID", so the two missing countries must start with the letters T and S, respectively.

Not the answer you're looking for? Browse other questions tagged progressive-matrix humor flags or ask your own question.