In it to win it

Try make sense of what you see below and then fill in the missing letters.

Start by noticing that the images indicate:

countries (the map) and alliances (the hands together).

Notice then that the initials are:

In fact, we can go further and notice that:

the columns directly beneath each initial are the exact same length as the country names! Thus we are expected to insert the letters of the countries downwards in their corresponding columns, like so: 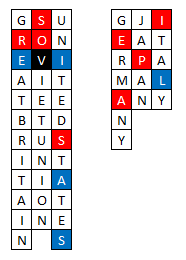 It just remains for us to:

insert red letters into red spaces in the solution phrase, black into black, and blue into blue. The way to do this and achieve a thematic answer is to spell out AXIS POWERS VS ALLIES!

(And, of course, as per the title: All of these countries took part in the war, hoping to win it...)