Who owns The Golden Pie Café?

It's the early second millennium, and we're in Italy's two-dimensional cartesian world, and look, Mr.X has just opened a new café—The Golden Pie Café! He's put a lot of thought into constructing the café, and has tried to make it mathematically perfect! Here's a snippet from his speech announcing the café's opening:

Oh, what better place to eat a delicious pie than a café with an area of $\pi$! There’s something truly golden about this place, isn’t it? It’s like you can sense it, and its power is just there, dividing reality along two axes. Oh boy, I feel special today; this is the fifth café I've launched and I wanted to make it a memorable experience for you guys, so I've added something cool to this place. Since your support has been like light in darkness, I wanted you to feel like a ray of light every time you place an order in the café. 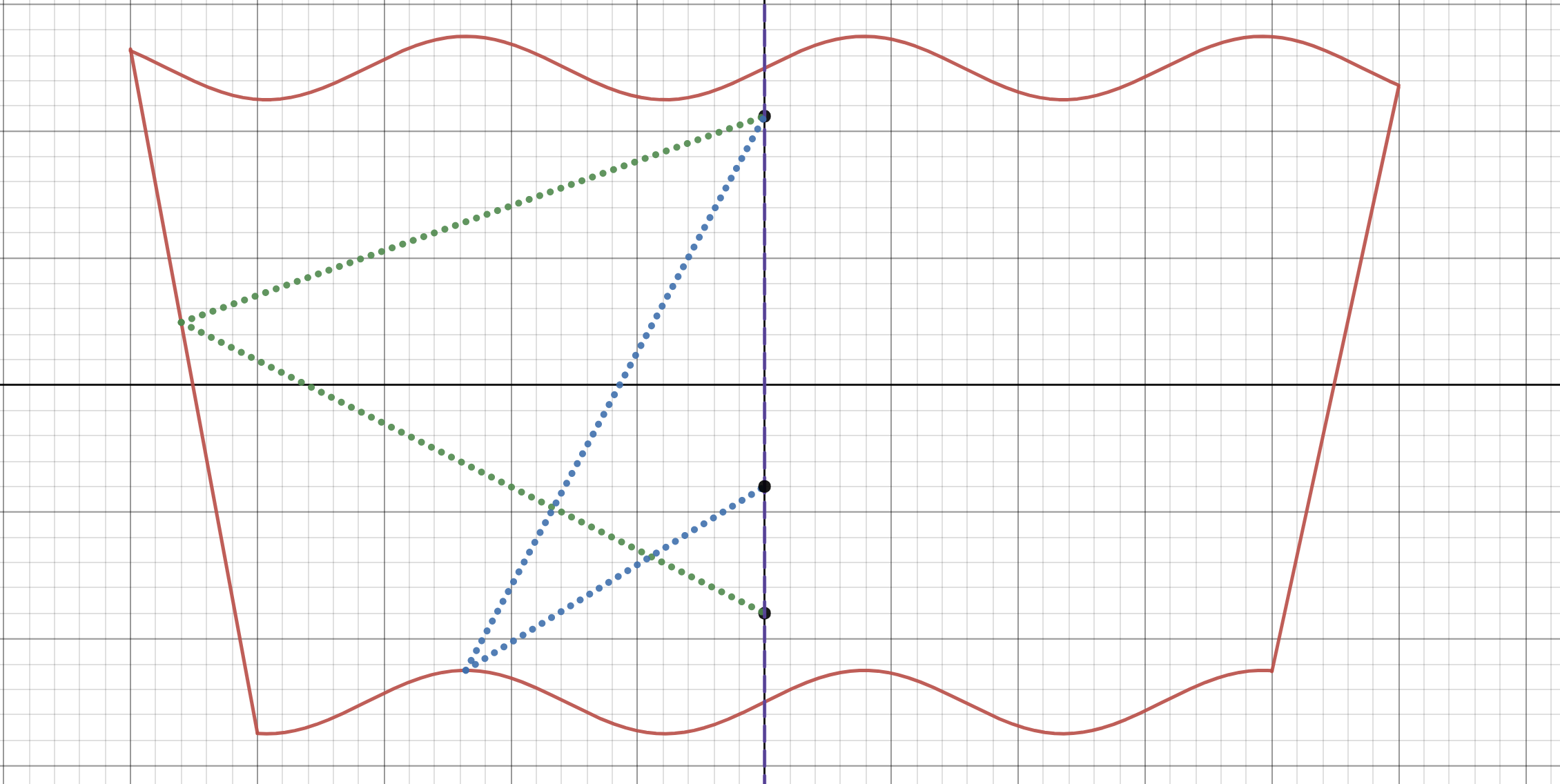 The image above is not an accurate representation of the shape of the café. Further, the lines, points and angles are not to scale. However, the image serves as a visual aid to understand the system described below. (Created using Desmos).

To order a pie, you start at a point inside the café which has coordinates $\left(0, \sqrt{x\sqrt{5}}\right)$1: $\sqrt{5}$ 'cause it’s my fifth café, and $x$, oh, that’s a secret, but it has a little something to do about me, well, actually, it has everything to do about me! $x$ doesn’t come from a random set of numbers, it’s special, a reflection of my identity. Anyways, moving on. At your starting point, you choose a random angle, and we take you in a straight line along that angle, until you reach a wall of the café. And then you'll function just like a ray of light, reflecting about the wall in a straight line to a point with an x-coordinate of zero; here, you will place your order. In this happy ride, you'll also get to see some pie-making behind the scenes—perfect, isn’t it? Oh, and focus on one more thing, the y-coordinate of your ending point will always be irrational, 'cause the café is just shaped like that; $\pi$ is in every corner!

Every month after launch, the café will grow longer2, its dimensions gaining more golden power, more even integer power! And $x$ will keep adapting to the new changes.

You may assume the café remains centered at the origin. The task is to unravel Mr.X's identity—what’s his name?

As a start, try to figure out the shape of the café. Of importance is the last (few) sentence(s) of the owner's speech.

1 $x$ is a positive integer.
2 It will grow longer in the literal sense, that is, in terms of size. The area of the café i.e. $\pi$ will not change.

First note that, from several clues, the shape of the cafe is

The tour describes how all light rays originating from one focus (start point) are reflected by the ellipse to the other focus (pay point). Furthermore, since the x-coordinate of the pay point is zero, it means that the major axis of the ellipse coincides with the y-axis and the location of where you need to pay is $\left(0, -\sqrt{x\sqrt{5}} \right)$ - since the cafe is centred at the origin.

So what is Mr X's identity

Well, $x=1$ initially and then each month changes to the next Fibonacci number with even index ($3,8,21,55,144,\ldots$). Given that, maybe Mr X's name is formed by taking the even indexed letters of FIBONACCI, i.e, Mr X is called IOAC