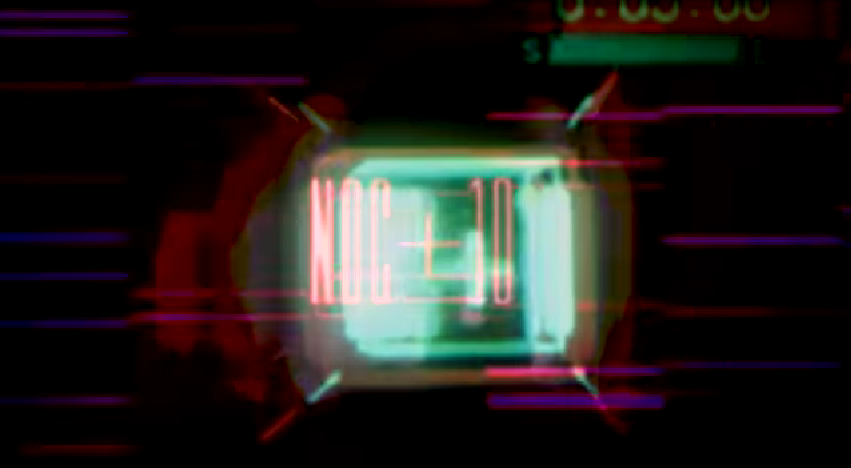 Since March 6th, 2015, a YouTube channel called Noc +10 has been uploading puzzle videos about once a week. Each video begins with the same introduction, followed by some form of clues which can be decoded to point to a hidden video's YouTube ID.

The hidden videos have had a nautical theme, possibly related to Naval Operation Concept 2010, but haven't presented any clear puzzles, aside from whatever meta puzzle or story is being told.

This question provides a writeup of the first five videos, and it's primary answer solves the fifth to reveal the sixth.

After that, three very strange videos that broke the pattern were posted, but they contained no apparent puzzles. I choose to ignore them for the time being. 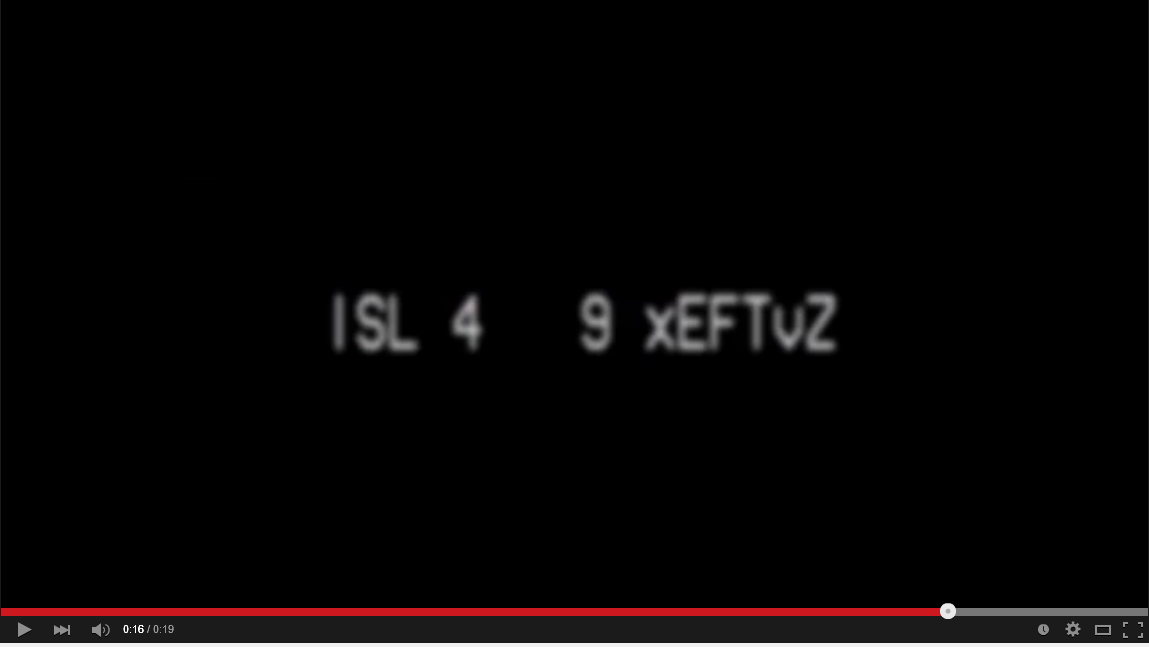 The seventh video, which is numbered sequentially in binary with all the others, begins with the NOC +10 logo and the same music playing in the background. At the halfway point, it switches to displaying the text ISL 4 9 xEFTvZ while playing a new song, identified as "Air On the G string", August Wilhelmj's arrangement of a piece by J. S. Bach.

As before, we can expect the text displayed to decode to a eleven-alphanumeric-character YouTube video ID.

According to Wikipedia, the song is most notable for Wilhelmj's arrangement, which allowed him to play the entire piece on just the G string of his violin. I suspect that that means that the letter G is a major factor in the decoding, although I'm not sure how.

I've tried shifting the letters by 'G' (like with the Caesar cipher in the first video), as well as several operations on the ASCII values involving G, but nothing has led to an active video ID.

The mystery has finally been solved!
The answer is:

Explanation:
The encrypted text is actually "lSL 4 9 xEFTvZ" and not "ISL 4 9 xEFTvZ" (the difference is in the first letter, which is lower-case L instead of upper-case i).
The code is then easily decrypted shifting back the first block of letters by 4, the second block by 9 and keeping intact the two numbers.
The result is:

As you can see, the main difficulty was in the interpretation of the first character (absolutely impossible to tell from the video). The cipher itself wasn't too hard (just two Gronsfeld ciphers).

This is not the definitive answer!

This is just a summary of the information we got about his last video, a list of failed attempts and potentially relevant elements for new approaches.

Elements contained in the video:

Analysis of these elements:
The name of the video is, as usually, a binary number. Title numbers are always consecutive, in this case 0101 0101 0000 0111, which means 5507 in decimal. There seems to be no hint in the title.
As well, we have the typical intro music, basically NOC's signature. No info here!
Then we listen "Suite No. 3 in D major". What may be useful in it? Well, we have the number 3 and the capital letter D, but those information appear to be pretty irrelevant.
The real information is likely to be in the second name of that music, which is "Air on the G string". The words "Air" and "string" have the same length of "ISL" and "xEFTvZ", suggesting a direct correspondence between them.
Also, the word "On" could be interpreted as "1" (ON=1, OFF=0), so both strings can be perfectly aligned now. What about the "G"? When written in lower-case, "g" tends to be visually similar to the number "9", even though this appears captious.
Well, know we have the nucleus of the puzzle, the string ISL 4 $ $ $ $ 3 xEFTvZ.
The most notably features of this string are the presence of exactly 11 alpha-numeric characters, as in all Youtube videos ID (a video ID is what we actually expect to find), the sentence "IS LEFT Z" formed by the capital letters, an insolit separation between "4" and "3" (my ruler shows that it's made of 3 blank-spaces). As suggested before, these words align pretty well with the title of the music. Someone also pointed out that exactly 11 notes are played in the music. This might be a great hint, if confirmed!

Possible strategies:
It's almost obvious that we have to deal with a cipher, as we already did earlier. A Caesar's cipher would be too trivial, we've already solved that kind of cipher in a previous video.
Vigenere cipher is the top candidate to solve this mystery, since we are dealing with two strings of similar length.
Do we have to add or subtract the strings? We don't really know, try both!

Also, the 11 notes in the video could be a key, if only we could find their names.

What if nothing of this works?
Well, we would definitely need a new idea! We also might need to dig into his 3 previous public videos, looking for additional hints.

What can I do to help? First, you have to officially verify that Caesar's cipher doesn't work at all. It requires only 26 attempts, if you do it please confirm its non-validity in the comments. Then, hoping that you have a discrete experience with programming and coding (especially PHP) you could brute-force all the Vigenere keys suggested above and check if that video exists. Please be accurate, a minor mistake in your code is likely to miss the ID we're looking for! Also, if you have time to waste (or your pc has), apply Caesar to all the ID you got and verify them as well! If you're experienced with music, please verify that the played notes are 11. If you are able, identify them!

Sources and credits:
My reason, comments below the video, this discussion. Thanks to Ian MacDonald for noticing the 11 notes.

Not the answer you're looking for? Browse other questions tagged cipher enigmatic-puzzle audio or ask your own question.

45
The mystery of NOC +10
31
What secret is this massive technical puzzle hiding? [riddles and data puzzles]
15
Director Fury wants his CORE back, one of the Avengers stole it
12
A Musical Mystery: Part 1
2
The Unsolvable Mystery
9
The landing: part one (coded mystery)
17
A Pub Quiz Joke
8
The Perplhexing Mystery