[Penpa link at the bottom, if you want to skip the story]

Objects in Mirror ... are different than they appear

Sue had found herself in another cursed temple. You'd think she'd learn, but this time it was really her friend Doe's fault. They'd been exploring for Doe's 9th birthday, stepped under an overhang, and fallen down a hole. Worse, a rock moved to block the entrance they'd just fallen down.

At least this temple seemed to be pretty empty. Except for a table in the middle, that is. It didn't look like Doe was moving any time soon (you couldn't blame them for hiding in a corner, not really - it was their first temple) so Sue went to inspect the table. On the top was a design with some strange arrows. 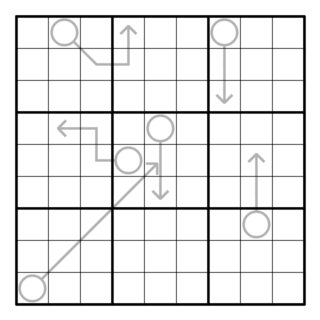 The design looked like an Arrow Sudoku. But after ten minutes of fruitless thinking, Sue was pretty sure it was impossible. There had to be something more! She cracked her knuckles and carefully looked around the table some more. Without touching anything, of course. (Doing that willy-nilly was a sure sign of a cursed-temple amateur.)

By this time Doe had worked up the courage to come nearer. They reached out and grabbed at the mirror Sue had been looking at before so much as a warning could be said. Strangely enough, Doe's fingers went through the mirror, as if it was only a frame, despite the fact it reflected light as well. Sue chalked it up to cursed-temple magic and took the opportunity to read the writing along the edge while Doe just stood there hyperventilating. Amateur.

Through the mirror is the answer you seek

Answers! Answers were great, maybe that would get them out. Sue gently pried the mirror out of Doe's hands and placed it in the suspiciously convenient grooves on opposite sides of the Arrow Sudoku. Looking through it now, nothing interesting happened - still just a mirror which your hand could go through. Wait, through?

Had the middle arrow always been poking out, just a bit? Sue wasn't sure. She gently touched it, and when nothing happened, grasped it more firmly. It seemed to - rotate? And it took the table with it. Ah-hah! Sue threw all her weight into rotating the table around and through the frame of this magical mirror. Once the arrows were settled on the other side (this table must be transparent, Sue mused) new shapes shimmered into being, each perfectly reflecting the corresponding arrow on the other side of the mirror. Except... different. 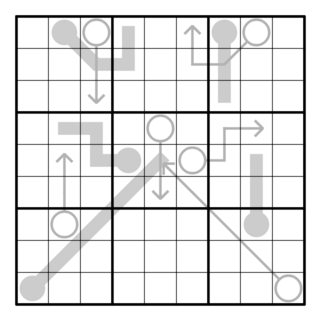 Now this, this Sue could solve. She'd show Doe the ropes of cursed-temple puzzles. It'd be the greatest 9th birthday ever.

This is a logic puzzle, and is intended to be solved logically. Please include description in your answer as to how the puzzle was solved. This could be as little as explaining a few key deductions, or as much detail as you would like. Answers with just the final solution will not be accepted.

Click on images for an uncompressed version. Or, here is a word-based description of the puzzle:

Finally, here is a link to a Penpa version of the puzzle.

P.S. - if you want a slightly bigger challenge, try to solve without the R7C2-R5C2 arrow. It's only there for antisymmetry. This isn't worth anything extra except imaginary bobble points. 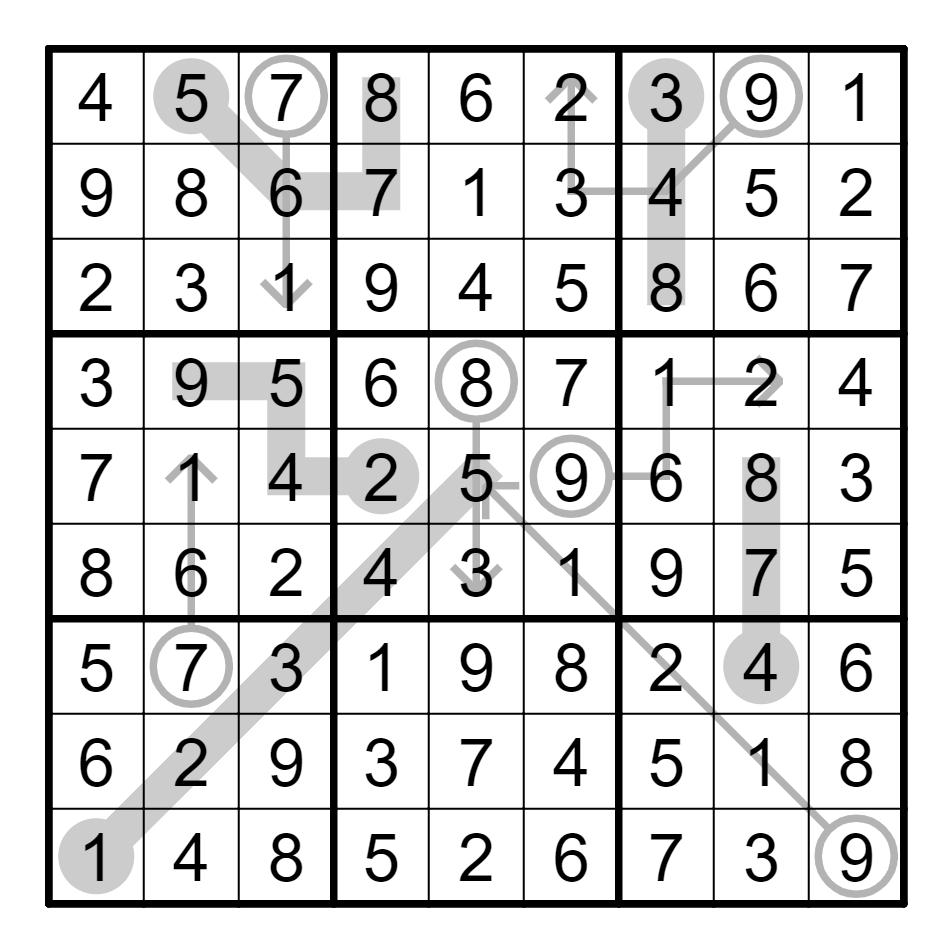 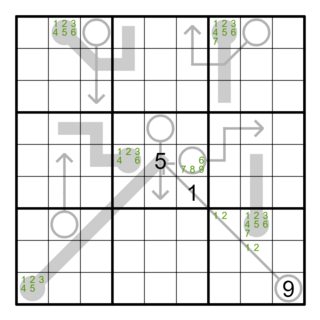 The obvious place is to start in the middle cell, as that's where we have the most information. From the thermometer, we know it can't be less than 5, and from the long arrow, as the total can be a maximum of 9, the remaining 3 cells must be a 1, 1 and 2 - making the middle cell a 5, and hence the bottom right a 9. We have our first entries, and a few other candidates can be filled. 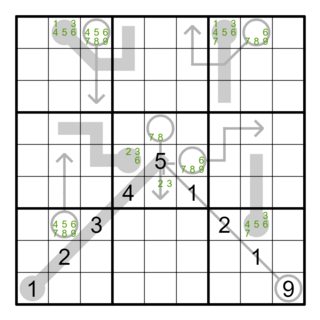 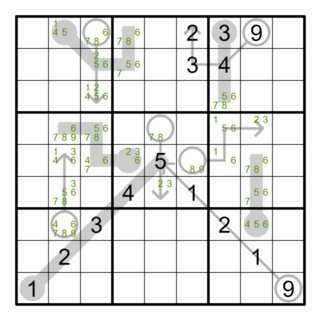 A lot of candidates can be filled in around the grid now, but the interesting bit is the top row. The top right intersection must be a 3 or 4, as there is a 1 in column 6 restricting the arrow, creating a 2/3 pair and the arrow must be an 8/9. The thermometer then is also restricted, and notice that it cannot start with a 1, as that would mean the arrow further down is not possible. This places several numbers and restricts many other candidates down further. 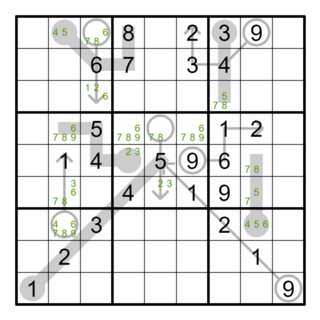 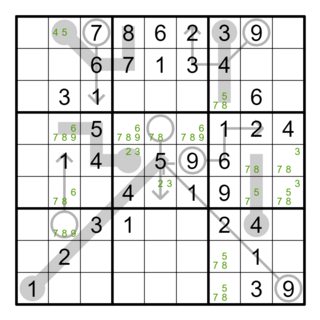 Major breakthrough found, the puzzle becomes much easier; the top left arrow can be resolved, an isolated 1 bottom middle square, and 4 middle right leads to a 3 bottom right - placing a 4 at the start of the thermometer. A 6 can be placed top right, and then top middle. A 3 can also be placed top left, and a 1 top middle. At this point, the grid is nearly solvable by pure sudoku logic. 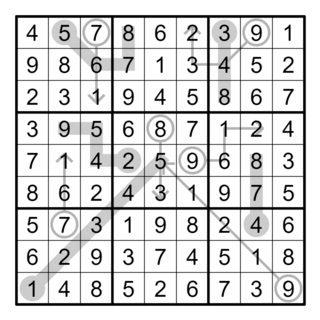 A 1 can be placed top right, and a 3 and 2 middle left. Column 3 can be solved, solving the arrow in column 2. A 9 in the middle left places an 8 higher up, in turn solving a lot of the top. A 3 middle right solves a thermometer and an arrow, and from here the puzzle can be solved (very satisfyingly!) using normal sudoku logic.

37
A Boyfriend's Mysterious Message
12
Oriental House: An original grid-deduction challenge
2
Three statements, who is saying the truth?
9
How much information can we get from a thermometer?
14
A Shingoki Puzzle
17
Sashigane: The Fives Have It
10
Sashigane: 5 arrows + 1 six
21
Escape from Sudoku!
2
Planar Investigator
18
PSE Advent Calendar 2022 (Day 1): A festive Sudoku