I had a visit yesterday from my good friend Major M. Provement. I say 'good friend' but he can actually be pretty annoying - he's always picking fault in my puzzles and trying to produce something better than what I come up with.

Case in point: Yesterday. I showed him my new puzzle:

After a little while of staring at the images, he asked me: "What am I looking for?" I mean, come on - wasn't it obvious??

"It's a four-letter word," I said. "Look I'll show you... First you identify the people, then you take the last letters of one of their names, so you get UgO Monye, Jos ButtleR, Madam MiM and Jude LaW, and if you anagram them together they spell WORM!"

The Major frowned. "That's not very satisfying," he said. "For a start, this is just a bunch of faces, literally no instructions about what to do with them - using the last letters of their names isn't clued anywhere at all, not even a hint; the same goes for anagramming - that's unfair. Then what you're expecting of your solver is inconsistent - the first name for some, the last name for others - and there are even other four-letter words you can make by taking the ends of some other names: MERE, SEEM, SOME... so how were we supposed to know which one you were thinking of? Plus, for that third image you can choose either the first name or the surname - it's ambiguous, and that's not very satisfying."

I was about to open my mouth in protest, but he hadn't finished speaking.

"However," he went on, "it's not completely unsalvageable. In fact, there's something these four images have in common that might make quite a good puzzle. Let me see..."

And with that, he took my puzzle, moved the images around, added in some more, and started scrawling lines all across it, saying things like, "And you'll need to give the solver a helping hand - their initials perhaps, to speed along the scutwork... A sensible ordering... An answer key... And a hint in the title, of course."

And with a flourish he presented me his improvement on my puzzle:

(In fact, he'd even made a colour-blind-friendly version too...)

"I guarantee you," said the Major with a smile, "that this is now a far better, more accessible, more constrained, and more enjoyable puzzle - you just needed to spend a little more time thinking things through from your solver's point of view during your creative process. It will still take a little time to work through, of course, but the payoff at the end will be worth it - see, the final answer is 10-letters long, very topical to the method of solving, and...

TASK: Identify the famous faces from fiction and real life and use the diagram and title to help you deduce the final 10-letter answer.

ABBREVIATA, which an internet search reveals as "... a genus of nematodes belonging to the family Physalopteridae." So we did, indeed, get our worm!

Who would have guessed that the answer to a puzzle about IATA ABBREViations would be ABBREVIATA? :)

Super cool puzzle, as usual. I spun my wheels for a while trying to

relate the anagram technique in the example (using the last letter of either the first or the last name), but realized that that was just an example and that this was a different, and much better, puzzle.

The trick is to

Take the 3-letter part of the name and map out each airport with that 3-letter code and connect the cities of those airports as shown in the diagram, and each color forms a letter.

Below are the screenshots. 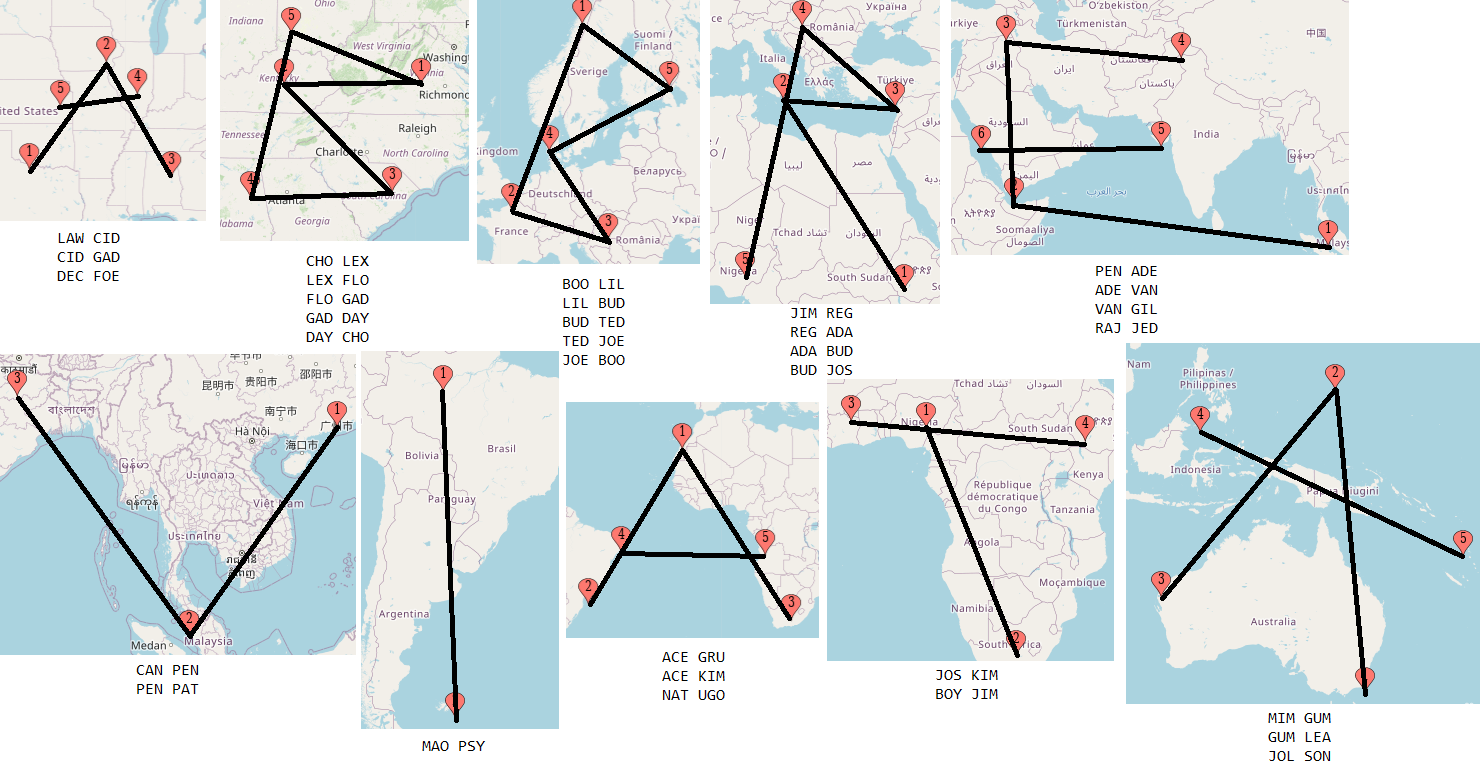 And the names attached to the diagram in the puzzle:

For those who are not familiar with how to do an image search, here is how I did it for this puzzle:

1
Four letter puzzles on US states
1
Combine the name of a fictional species and a way to cook eggs to find the answer
6
How many 5+ letter words can you find?
4
Cryptic Country 3
21
What's his horse name?
4
Carousel Seating Logic Puzzle
6
Words with a letter sound at the start but not the letter
2
What concept does the image symbolize?
17
The Moon and the Great Wall
21
Longer Than Usual