A robot starts at a node of a fully connected graph of 5 nodes (shown below). Each turn the robot can move across an edge and paint it in one of two colours - blue for odd turns and red for even turns. The robot can revisit nodes and edges, and it can repaint already painted edges. What is the most number of edges that can be painted in blue at any given point in time? 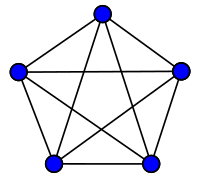 We can paint this many edges blue:

9 (out of 10) (This is only possible if we can immediately revisit the edge we just used in reverse, which doesn't seem to be forbidden.)

Say we start at B. The first edge will be blue.

AB is blue. Now the next edge will be red.

AC and AD are blue. The next edge will be blue.

BD, BE, and CE are blue. The next edge will be red.

AE changed from red to blue. The next edge will be blue.

BC changed from red to blue; CD is now blue. All edges are now blue except DE (which is red).

Why we can't do better:

Here is a method/proof that works for any connected graph with a cycle of length 3, which paints everything blue except for

one red edge in the 3-cycle.

Move the robot to the 3-cycle.
Of all the nodes that still have one or more red edges, find one which is furthest from the 3-cycle (counted in number of edge traversals needed to get there). If there are several at equal maximal distance, choose any one of them.
Imagine that the robot takes the shortest path to the chosen node. If the next move after that would be red, then indeed take that path. Otherwise go around the 3-cycle first, and then go down the path. Either way, the robot is at the chosen node and the next move will be red.
If any adjacent edge is red, traverse it twice to turn it blue. So now all the node's edges are blue.
Go back along the path (which makes the exiting edge red again), around the cycle, and then forwards and backwards along the path again (painting that edge blue). This makes all the chosen node's edges blue and brings the robot back to the cycle.
Repeat the above steps until everything but the 3-cycle is blue.
Move around the 3-cycle until two of its edges are blue, one red.

Below is my initial answer, which wrongly assumed that the robot cannot turn around and immediately repaint the edge it came from.

This answer depends on the following insight:

(Edit: The above uses that incorrect implicit assumption that the incoming and outgoing edges must be different.)

Think of the graph as being split into an outer ring and five diagonal edges.

15
Touching matchsticks with compass and straightedge
10
For n nodes that are connected to at most m and at least 2 other nodes, what values of n and m always allow the connections to not intersect?
13
The arrow of time flies in reverse
9
Connect the wires without setting off the bomb
10
A Wife to Honor - The waltz of the electrons
3
Creating the hardest 7x7 maze with special pieces
2
A robot moving on a grid
9
Maximize my flags