The duck and the wolf [duplicate]

This is quite a famous one, I think, but hopefully not too famous. The phrasing is loosely taken from here.

A duck finds itself alone in the centre of a round pond. On the edge of the pond stands a hungry wolf. If the duck reaches any point along the edge before the wolf does, it can fly away immediately. But if the wolf gets there first, it's dinner time. At any given moment, the wolf runs along the edge towards the point that's closest to the duck at that particular moment.

Question 1: If the wolf runs four times as fast as the duck swims, can the duck escape? If so, how?

Question 2: What’s the fastest the wolf can run such that the duck can still escape?

Yes, by being just over $\frac{4 - \pi}{4}$ from the center (approx. 21%)
At that distance, if the wolf is opposite of the duck, then the duck can race to the opposite shore and make it. Since that position is less than $\frac{1}{4}$ of the way to the edge, the duck can rotate the pond faster than the wolf, eventually getting the duck and wolf opposite the center.

Simple. The duck can always escape, no matter how fast the wolf runs.

If it's a 'puddle duck' then it can do a vertical-takeoff from the middle of the pond, without going near the edge.

If it's not a puddle duck then it must be a 'diving duck', which means it has a food source handy (at the bottom of the pond), so it can just wait for the wolf to get hungry and leave.

(As the duck is on a pond, that seems to exclude the possibility of it being a seaduck). 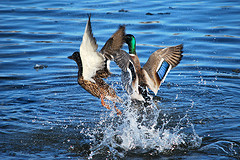 Another distinguishing characteristic of puddle ducks when compared to diving ducks is the way in which they take flight when spooked or are on the move. Puddle ducks spring straight up from the water, but diving ducks need to gain momentum to take off, so they must run across the water a short distance to gain flight.

The silhouette of a puddle duck sits higher on the water than diving ducks and when they want to take off, they lift directly upward. Their diving cousins need to run along the water before gaining altitude.

Dabbling ducks in comparison to diving ducks have larger wing areas relative to their body weight. Their wings are longer, rounder, and have really well developed wingtip slotting. All of this improves their ability to land and take off in tight spaces. Taking off vertically out of the water requires the duck to push with their wings and their feet simultaneously. Usually facing the wind, the dabbler will create airflow past the wings by flapping backward up and forward down, angling the primaries (largest flight feathers) to produce the maximum thrust. Lift occurs when airflow on the wing has lower pressure just above the wing, and higher pressure below. Divers wings are more streamlined, which helps with swimming and diving, but requires a build up of speed in order to take off.

Ask a Biologist: What are the mechanics/biomechanics which allow puddle ducks to perform a vertical take-off. They seem to just elevate straight up with minimal forward motion. How do they accomplish this?, Delta Waterfowl

Diving Duck (aka 'Pochard' or 'Scaup') 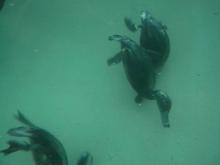 If it's a diving duck, it just stays in the middle of the pond, feeding from the bottom of the pond as necessary, until the wolf gets hungry and goes away to find some other dinner. The duck can outlast the wolf because the duck has a convenient food source right there to hand - the wolf has to go away to find something (other than the duck) to eat.

This means that the duck can keep the wolf opposite until $r=\frac 1 4 R$
After this, the duck goes straight to the pond edge, which is distant $\frac 3 4 R$.
Now it's all a matter of time $t$, the duck must cover that distance before the wolf can cover half circle! Is it possible? Let's verify it!

Generalizing the above answer, we get the formula:

We already had that

Not the answer you're looking for? Browse other questions tagged geometry strategy or ask your own question.

13
Escaping a hungry lion you can't outrun
47
The vicious wizard...and you!
4
Rapunzel and the Prince
10
The game of Shafiqa and Habibi
11
Ernie and the Disco Unicorn
9
The Universe and Spaceships
12
Ernie and the unfair division of the dessert
5
Brute-force solver for Gear Octahedron - flawed method?
12
The Troll, the dwarves and the gloves