How do I create a sliding-blocks puzzle (specifically like the "Rush Hour" ones) which requires an "ah-hah!" moment?

My grandma gave me a set of Rush Hour puzzles as a small child, ever since I could be trusted to not eat the pieces. I still enjoy playing these today and would like to try my hand at making some like it. They are a kind of sliding-blocks puzzle. The set-up is:

One of my fondest memories with the puzzles was when I realized that, in order to solve the puzzle, I had to move the red car all the way backwards (i.e. leftwards), shuffle the other pieces, and only then would there be a clear route out. There have been other "ah-hah!" moments since, mostly realizations that the key to the entire thing was getting a single innocuous car to be in a certain location. Once the central secret of the puzzle was uncovered, everything became much simpler. Typically I would focus on accomplishing this new all-important sub-goal (get car X to spot Y) and once that was done everything else fell into place.

I would like to make puzzles where the difficulty is coming to the "ah-hah!" moment, which is both necessary to solve the whole thing and, once accomplished, sufficient to make the rest of the puzzle comparatively simple. How would I approach designing such a puzzle?

I've made grid-deduction puzzles before with (what I hope were) interesting "ah-hah!" moments. However, I feel like I had much more control there. For one thing the board was static. I could set up a clue at one end and, no matter what else I did with the solution path, that clue would be in the same place for when it was needed. With a sliding-blocks puzzle I don't have such a luxury. The blocks/cars literally slide around. The whole point is for them to be constantly in motion.

Given that, how can I make sure that there is no way for the player to get around thinking of my "ah-hah!" trick? Something I dislike is over-stuffing the board with cars. Having so many serves to distract from the important parts, which might be useful/fun, but can also make the puzzle much more of a slog. Even after all the fun solving is done these annoying small cars will still need to be shuffled around. Often there will be only one option for each move, so there is no thinking to do.

I do not want to go down that road if at all possible; at the very least I'd like to minimize the effect. The simple puzzles, with few cars but still high difficulty, always seemed much more elegant to me. Visually seeming to have less obstacles, yet still running into difficulties accomplishing what "should" be an easy task, always turned on my "there's a trick" internal alarm. Indeed, there was typically a trick!

Of course I could rely on computers to either generate or check the puzzles. The former is immediately out of the question because I enjoy making puzzles by hand, not letting a program (even one I made myself) do it for me. The latter could theoretically be used to make sure that the "ah-hah!" moment is necessary, but also feels vaguely like cheating since I like for the logic of my puzzles to be understandable to a human. The most important human being me, for double-checking purposes.

What I'm looking for in answers

A good answer should directly address the bolded question in my "Goal" section. It would lay out a strategy or some key tips to keep in mind when designing a puzzle to my liking. It would also address at least some of the difficulties brought up in the "Difficulties I've considered" section. Finally, it should be based on some experience making puzzles like this, or at least something similar enough that the experience carries over.

Frame challenge answers would also be acceptable, provided they still address the bolded question. If some premise in my question is wrong/misguided, I'd welcome someone pointing out what the problem is. The one premise that should not be questioned is the goal I'm trying to achieve. (I don't actually want to do something else; this is not an X-Y problem.) However any premise contained in my "Difficulties I've considered" dithering is fair game.

Disclaimer: I have never created this specific type of sliding block puzzle, but I have played the free ones online a lot (for example here).

Ok. On to the main question: How would I approach designing such a puzzle?

There are 4 ways I can think of (listed below), and the one I list last (#4) is the one that best fits your desires, I think. All of these methods take plenty of time because each puzzle, whether created by you or a computer, must be solved by you personally in order to check for the right feel and aha moment(s).

Other Things Worth Mentioning
One of the things that make Rush Hour puzzles fun is having to think logically through many possibilities and recognize dead-ends. Take this puzzle, for example: 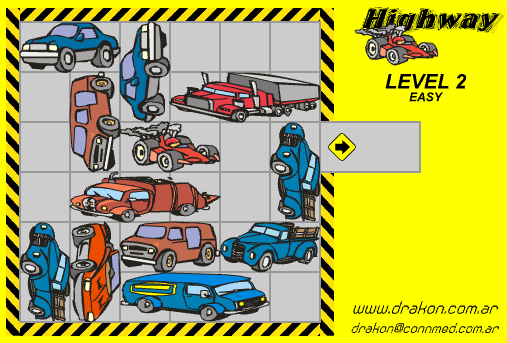 The blue truck blocking the exit has to be moved up or down, obviously, but only after thinking about it for a little while will one realize that moving the large red semi truck to the left so that the blue blocking truck can move up is not possible because of the 3-length brown truck under the red race car. I would consider that realization an aha moment. Just knowing which way I need to focus makes the puzzle doable and fun. When you create your own, make sure to work in at least one good alternate possibility.

It is similar to maze creation. If all of your dead-ends are very short paths, the maze is not fun because one cannot get lost in it. Make sure the incorrect paths are long enough (enough logical steps long) that it makes the solver stop and think, which is what the solvers of these really enjoy.

Would it be helpful for me to create one of these using the "work-backward" method and post that process here? If so, I'm game!

EDIT:
I added in (below) the process of my creation of a Rush Hour-style puzzle using the work-backward method. It was much more fun than I had imagined. Not surprisingly, and as many things are, it feels like one would naturally get intuitively better at creating interesting Rush Hour puzzles (and solving them) the more time that was spent creating them using the work-backwards method, or any method, really.

Note, this is the first one of these I have ever created, and I'm sure if I played around with creating more of these, that after a short time I'd be making interesting puzzles with at least one "Aha!" moment. The one below is good for an example of the process, although it didn't cause me personally to have a huge "Aha!" moment, but instead 2 or 3 small ones. It is difficult to tell if this is because I created it and was familiar with it, or because there simply was no huge "Aha!" moment.

Read the diagrams left to right before moving down to the next line.

I started with a solved state. 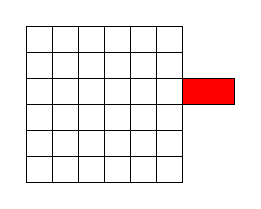 Then I added a truck. The T1 means 1 total move required in order to reach the solution (and can include moving the red car too, but it doesn't in this example.) The total # of moves is loosely correlated with puzzle difficulty, I think.

Then I added another truck, which makes it a 2-move puzzle. 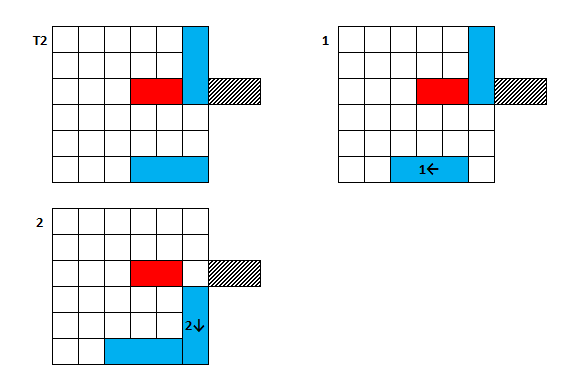 Then I added 2 cars, making it a 3-move puzzle. However, looking back at it now, I see that the car in the lower left is really not needed, and could be removed if desired. Also, the space it is taking up could then, instead, be used to add more complexity. 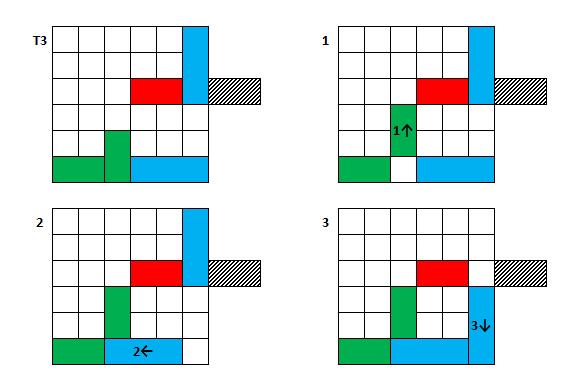 Then I added 2 more cars and a truck, making it a 7-move puzzle. 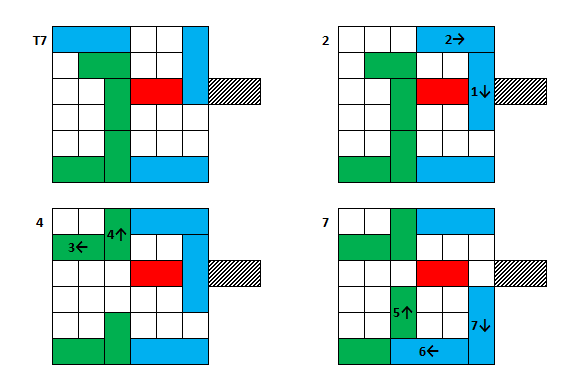 Then I realized that I could move the red car all the way to the left and the puzzle would not change (still a 7-move puzzle). That would allow me to add complexity using the spot that the red car had occupied. 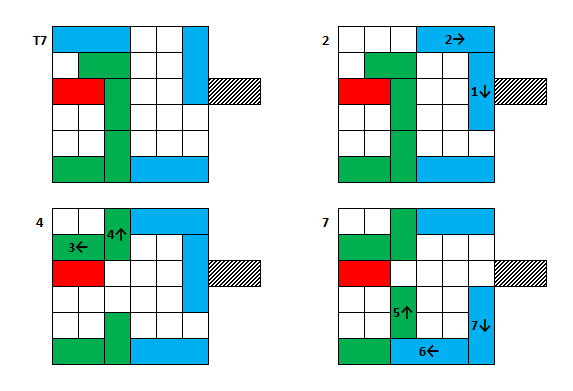 Then I added one car blocking the first move that needed to be made, making it an 8-move puzzle. 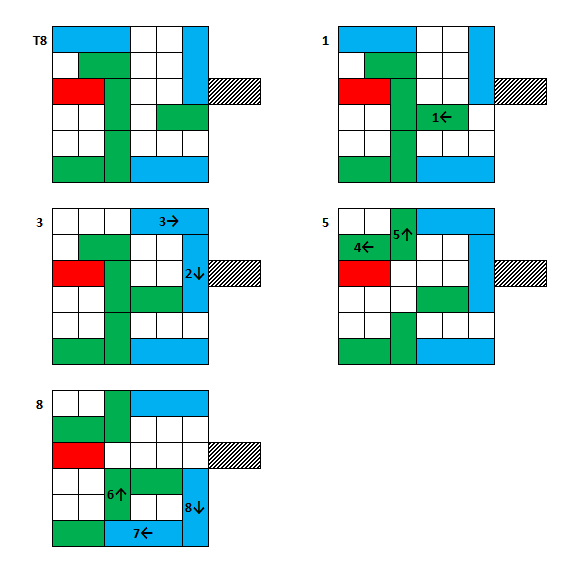 Then I added a final car that blocks the move of the car that I added in the previous step, making the puzzle an 11-move puzzle. 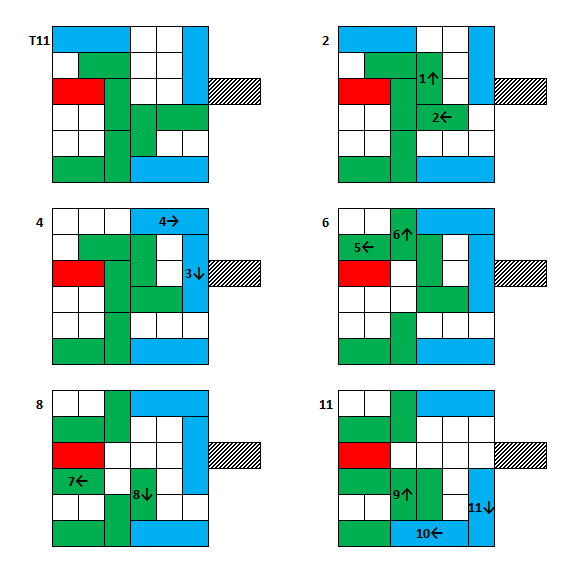 Bouncing off @JLee's excellent answers above, how about using puzzle creation as a puzzle itself, where one is required to find puzzles that provide 1...N move solutions?

Finessing that, one could include a score mechanic, inversely related to the number of vehicles for each puzzle. (ie, the fewer the vehicles used, the better).

This has a couple of nice features to it:

Here is an example of a potential solution for the series 1..6. (I didn't use the 'minimal vehicle' constraint, which would be a bit more advanced.) 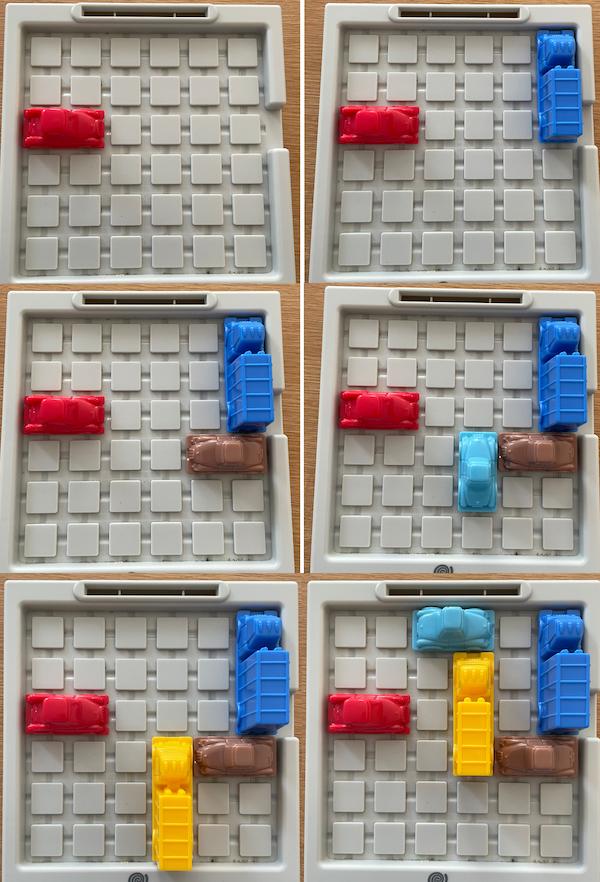 Disclaimer: This is my personal opinion and thus, subjective.

I think that the main challenge for creating (and having) aha moments, is providing sufficient tools to create a variety of options for the player.

Let's say you're writing a puzzle for SE or a Puzzle Hunt. Apart from all the ciphers/encodings we usually use for puzzles (think Morse, Braille, Semaphore, Binary, etc) you have anything that can be googled as a possibility. You could make a puzzle where the aha involves relating random words to a list of Nobel prize winners, or Unilever products, or Super Bowl losers, or asteroids in fictional universes. The variety of available ahas is never-ending.

But (here's where I challenge the frame) every time you add a rule, you're removing degrees of freedom and chances to create something novel. If a puzzle has some rules but leaves some freedom for customizing (like Sudoku varieties, where the basic rules of no repeated 1-9 numbers in each row/col/box are still met), you still have the space to create an interesting aha. In a game like Rush Hour, the available actions are way too constrained to allow novelty. Specially because you could just brute force the solution without ever realizing there was an aha.

If the player doesn't have the freedom of actions required for creativity to flourish, I don't think you can create an aha moment for them.