Here is the story.

The inhabitants of planet Nuri have captured their arch-enemy, the hyperking of a neighboring planet (thus "alien").

They plan to confine him in a labyrinth built out of stone blocks placed on a square grid. They want to take advantage of the curious particularity of how the hyperking can and cannot move. The idea is to prevent him to escape while allowing the Nurians free access to him.

A hyperking moves like a king in chess, except that he moves twice as far (thus "hyper-"). He moves exactly 2 cells in either of the 8 directions. He cannot do otherwise. The spooky thing is that he can do so unhindered by walls, he can tunnel thru solid stone (thus "quantum-tunnelling"). Only the destination cell must be empty.

There is a staircase leading down into the labyrinth at each of the 4 corners. The hyperking prison cell connects to the upper left corner. The labyrinth must be designed to prevent the hyperking to move to any other corner of the labyrinth.

Below is a floor plan which fails to prevent the hyperking from escaping. As a warm-up, can you find the path the hyperking can take from the upper left corner to reach another corner? 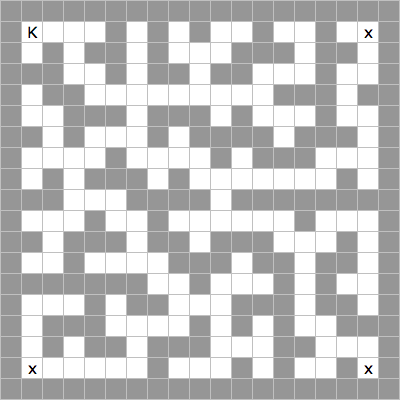 Your mission now is to fix the labyrinth. Adjust the labyrinth or design a completely new labyrinth on a 19x19 grid, that respects the architectural constraints and prevents the hyperking to travel from his corner to any other corner.

If necessary, you can choose a different size for your labyrinth as long as you have 4 distinct corners inside of the outer wall.

If you think it is impossible, explain why it is so.

Let's call a "point" an intersection of horizontal and vertical lines, i.e. a "corner" of a wall.
The condition on the maze means that, if one starts from any point and travels along the walls, then one can visit all points and return to the starting point. Let's call this loop the "main loop".

We may paint the points black and white in a checkerboard pattern, i.e. two adjacent points are painted different colors. This shows that any loop of points has an even length.

In order that the king cannot escape, there must be a "cage" of rocks that encloses the starting point of the king, something like in the picture below: 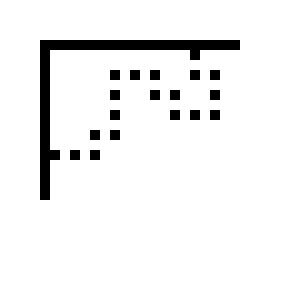 It is easy to see that the number of points within the cage (including those on the inner boundary of the cage) is always odd.

Now we consider the part of the main loop within the cage.
If there is a "door", i.e. the main loop enters and exits the cage between two rocks, then we "close the door" by directly going from one side of the door to the other side.

Note on the existence of the main loop:

We connect two adjacent points with an edge if there is a wall between them, i.e. the two blocks between them are one rock and one empty.

I claim that every point has degree $2$.

If a point has degree $0$, then the four blocks near it are all rocks or all empty.
If a point has degree $4$, then two diagonal blocks near it are rocks and the other two diagonal blocks are empty. Since some orthogonal path connects the two empty blocks, the path must divide the plane into two connected components, and the two rocks are separated into these two components.

Therefore the graph we get is a union of cycles. There must be only one cycle because the empty/rock blocks are connected.

As a warm-up, can you find the path the hyperking can take from the upper left corner to reach another corner? 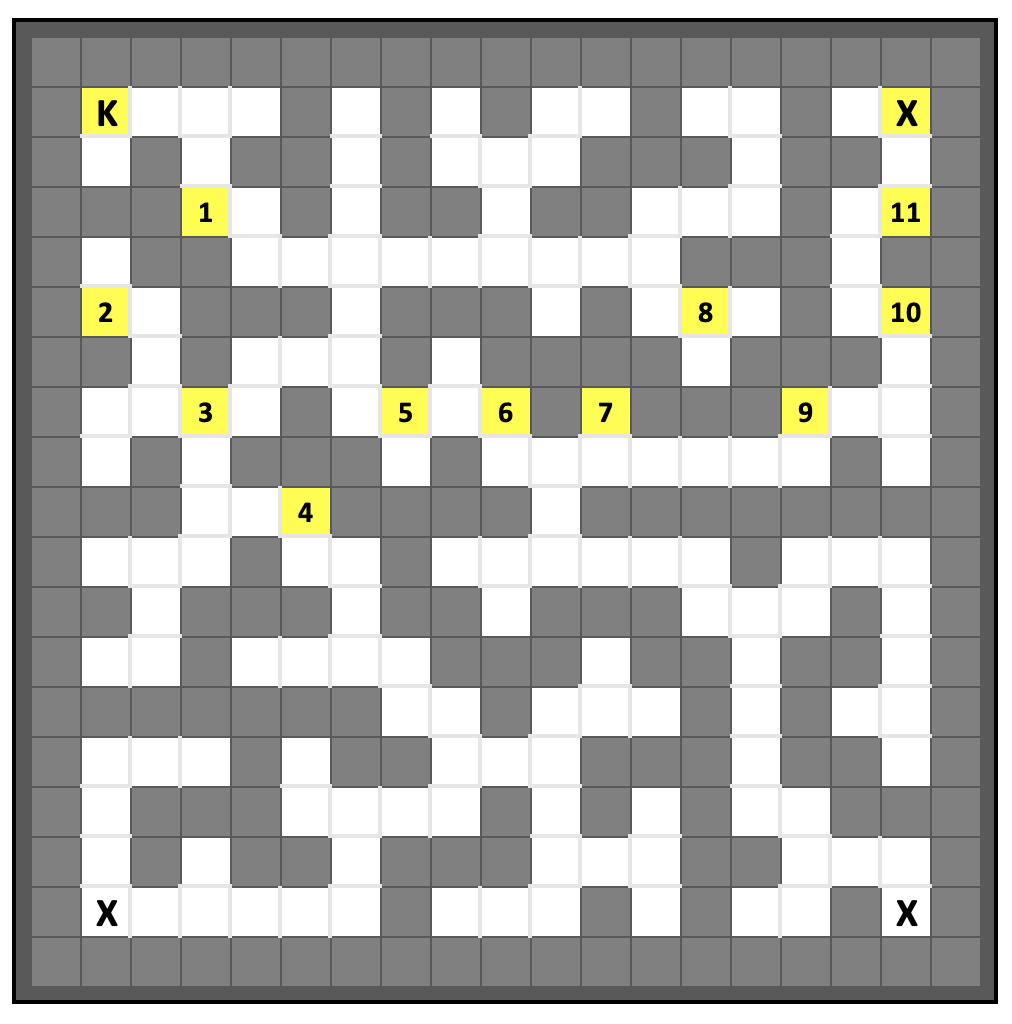