Three of my Find-the-stars puzzles

A Find-the-stars puzzle is played on a square grid that is initially empty except some squares contain arrows.

The goal of the puzzle is to fill some empty squares with stars so that: 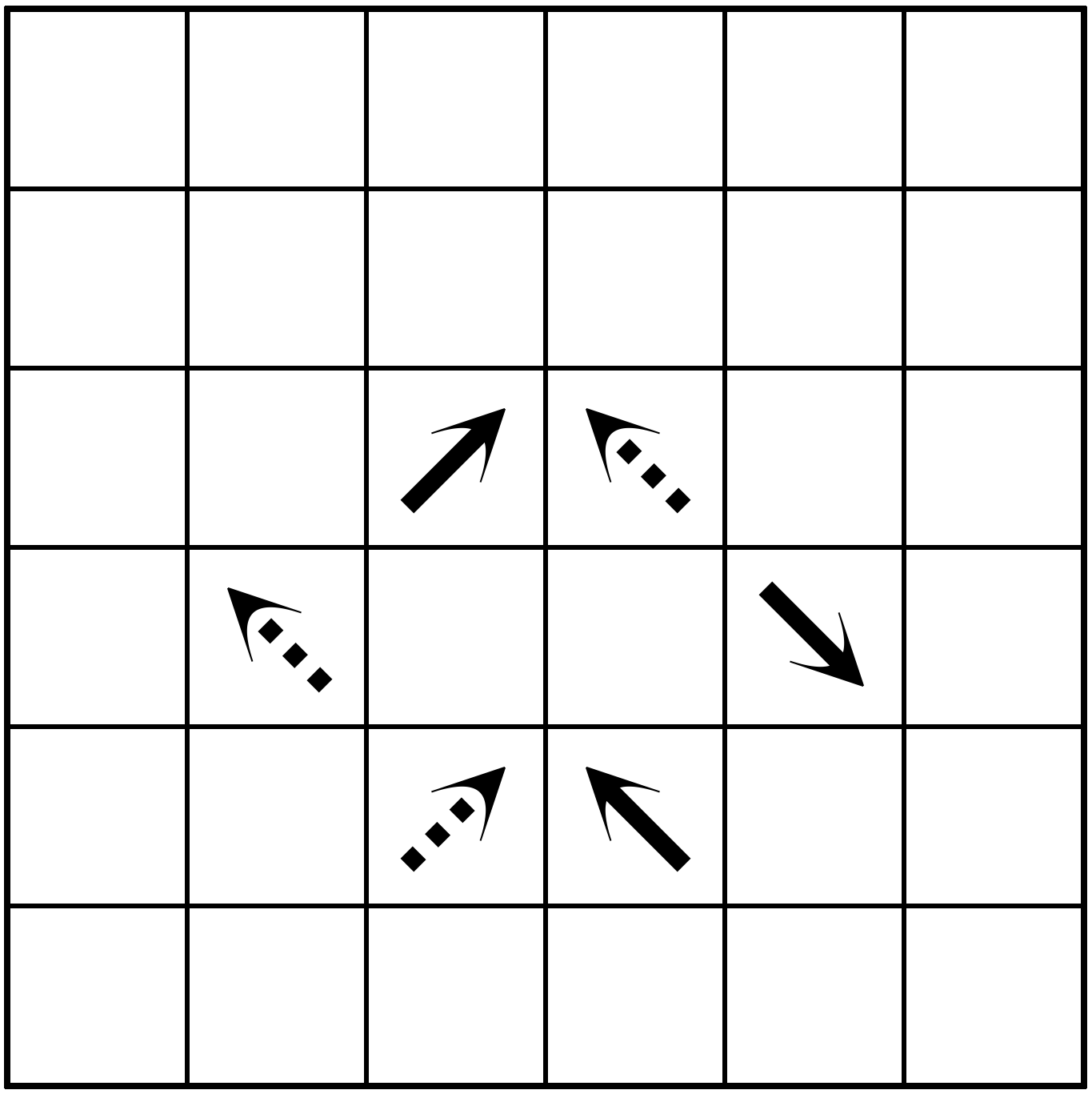 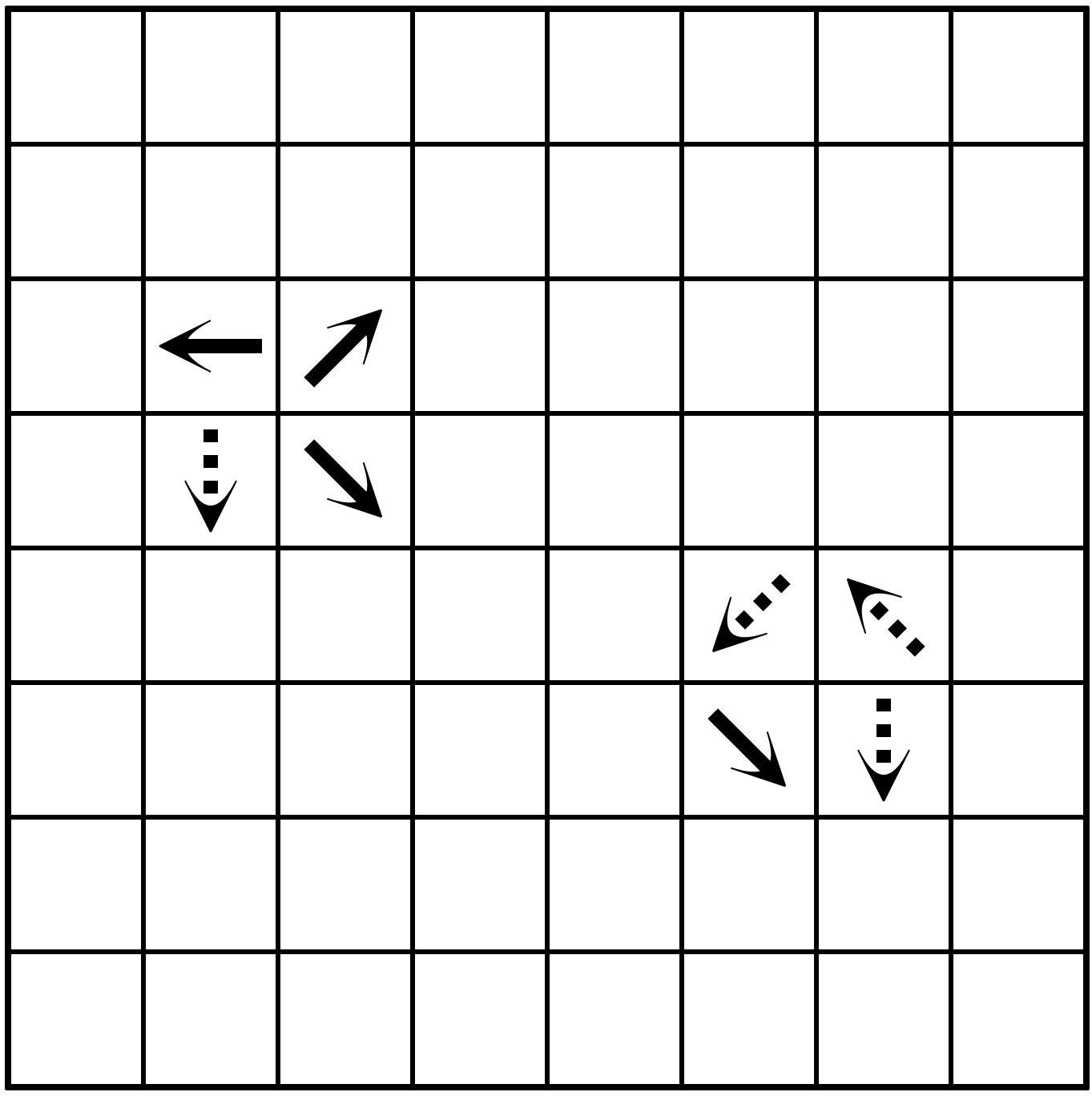 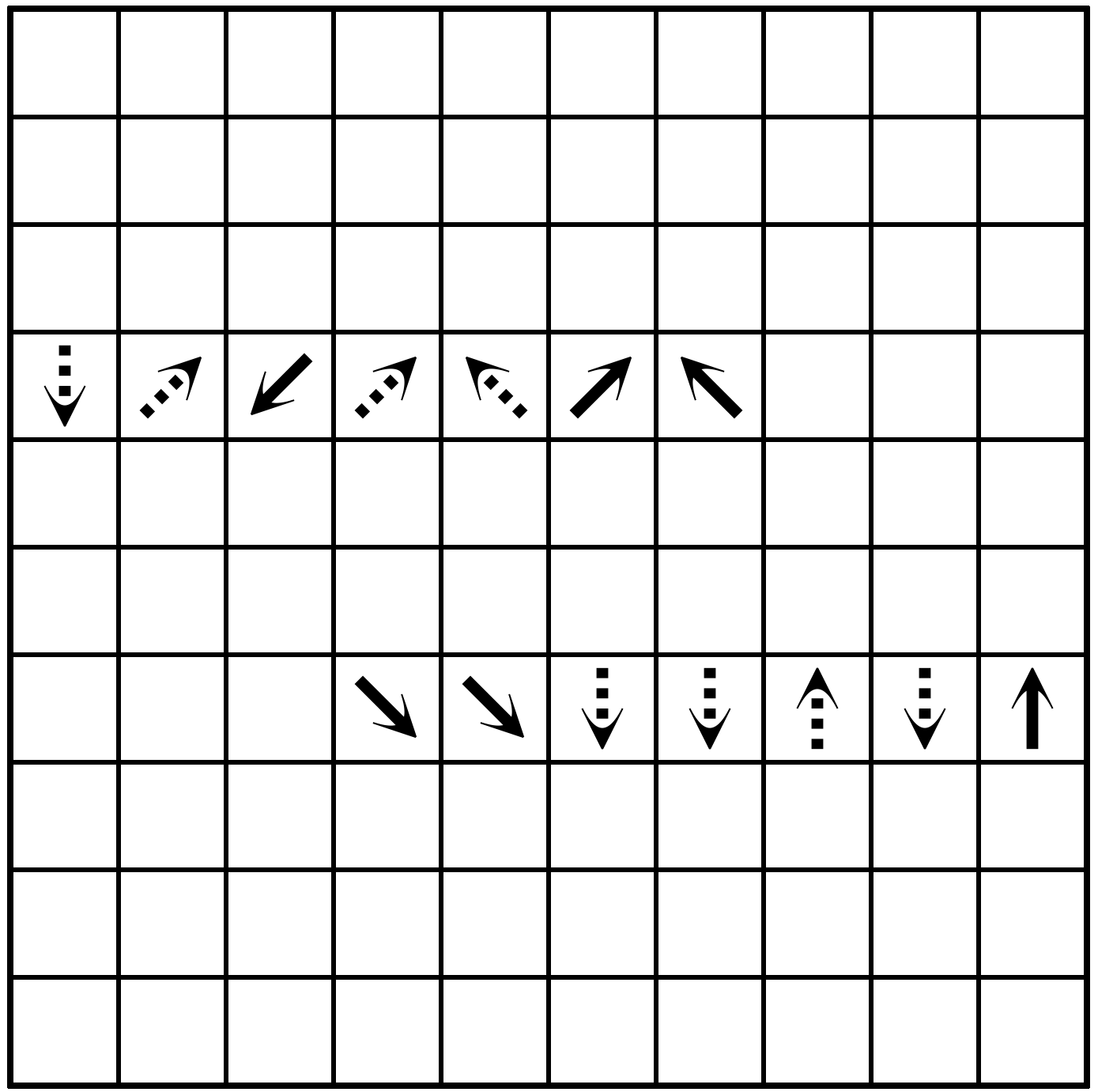 Although @cap has provided the solved states for each grid, I think it would be useful for people wishing to understand the puzzle's logic to have something more step-by-step at their disposal - so here are some more in-depth explanations of the logical steps involved in solving these puzzles...

(NB In all cases, a confirmed-blank 'excluded' space is represented by beige shading, a star by dark grey. I have used RxCx notation to define a cell by its row number (Rx) and column number (Cx), counting from the top-left corner. Remember that - by rules 1 and 2 - once the position of a star is determined, all other remaining cells in its column and row can be excluded.)

Begin by excluding all spaces containing an arrow, or in a straight line ahead of a dashed arrow. 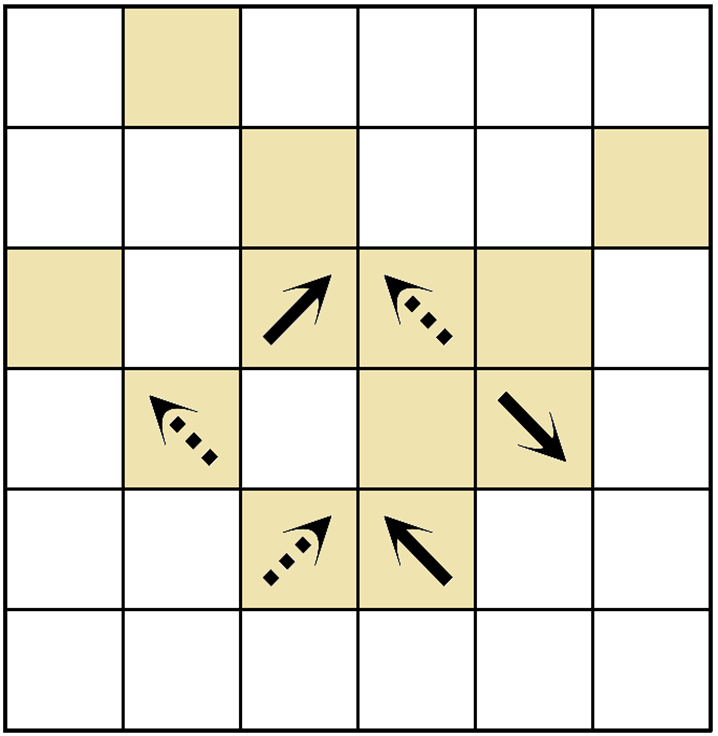 R5C6 must be a star, as the only space ahead of the arrow above and to its left. This leaves R3C2 as the only remaining blank space in row 3 - this must also contain a star. 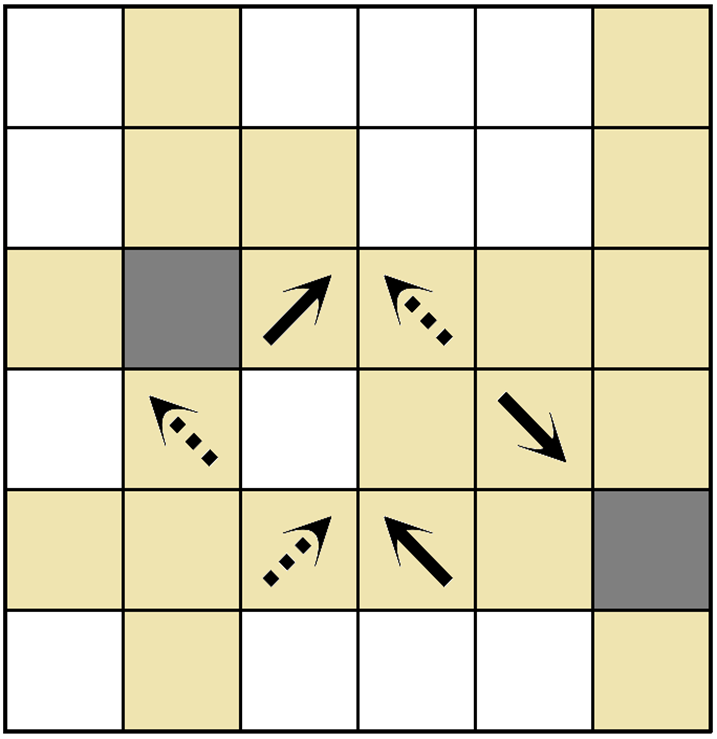 Since this star falls in line with the arrow in R5C4, the other spaces in line with this arrow must be excluded. R4C1 is now the only unshaded cell remaining in row 4 - this must contain a star. 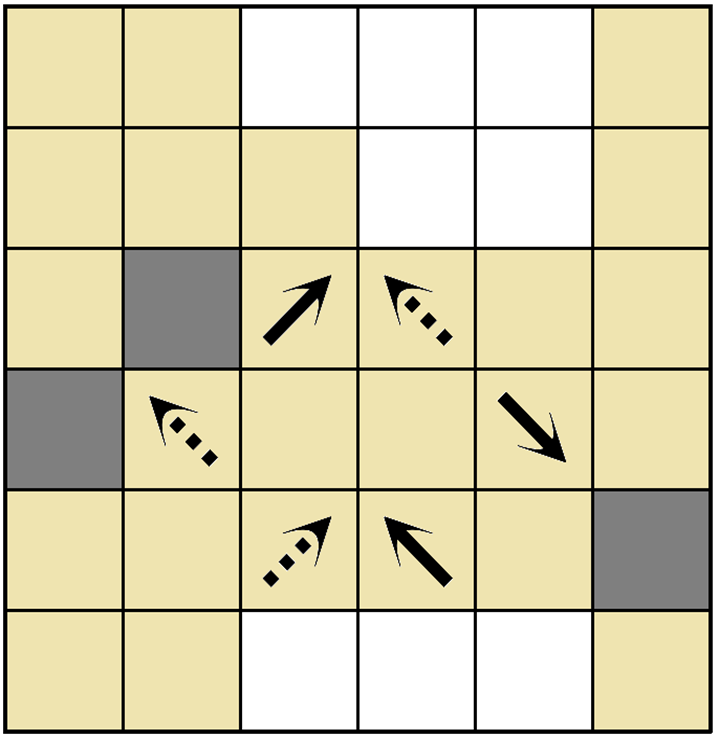 Now consider the effect of putting a star in R1C5 - this would force the placement of a star in R2C4, meaning there would be two stars in line with the arrow in R3C3, which contradicts the rules. 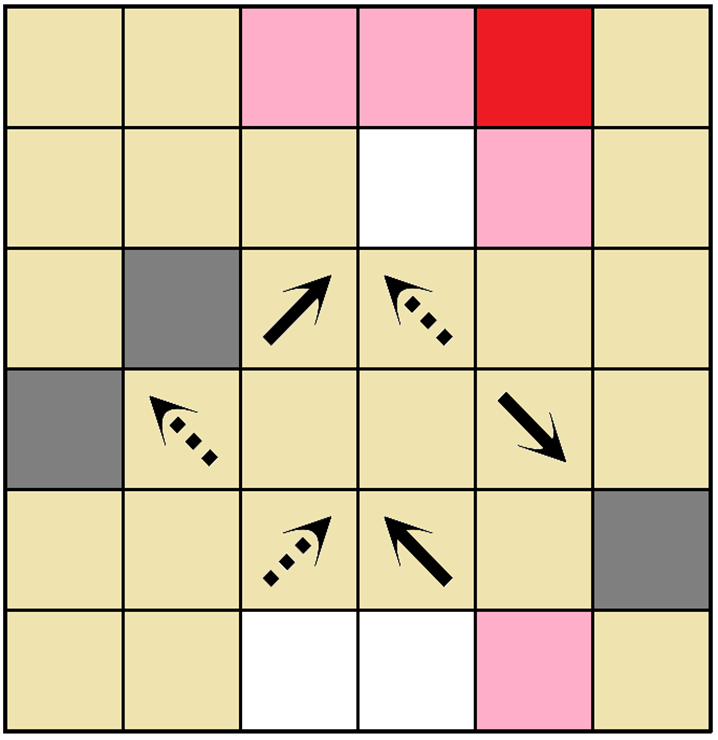 Instead, R2C4 (and not R1C5) must contain a star. Excluding remaining cells in its row and column leads to the forced placement of stars in R1C3 and R6C5, and the puzzle is solved: 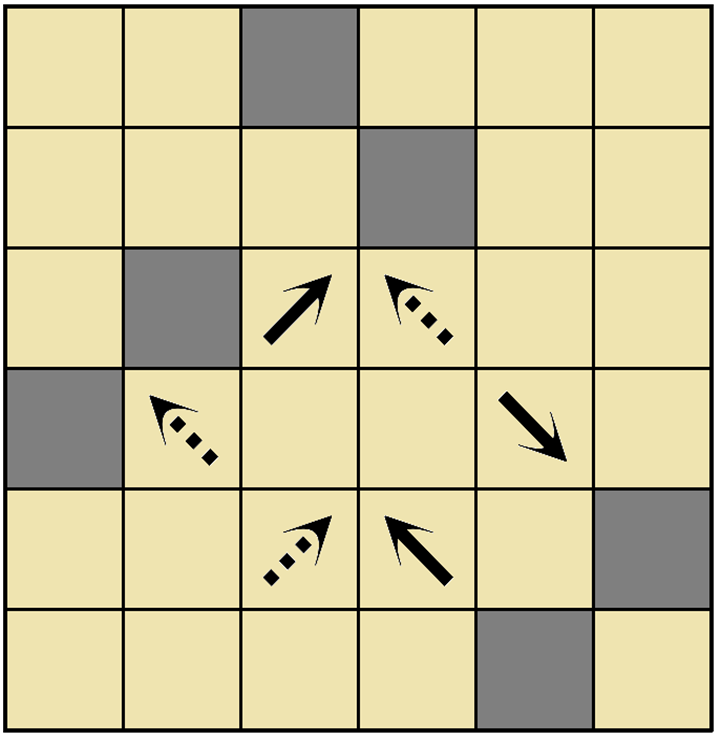 As with the other puzzle, exclude all cells containing arrows or in a straight line ahead of a dashed arrow: 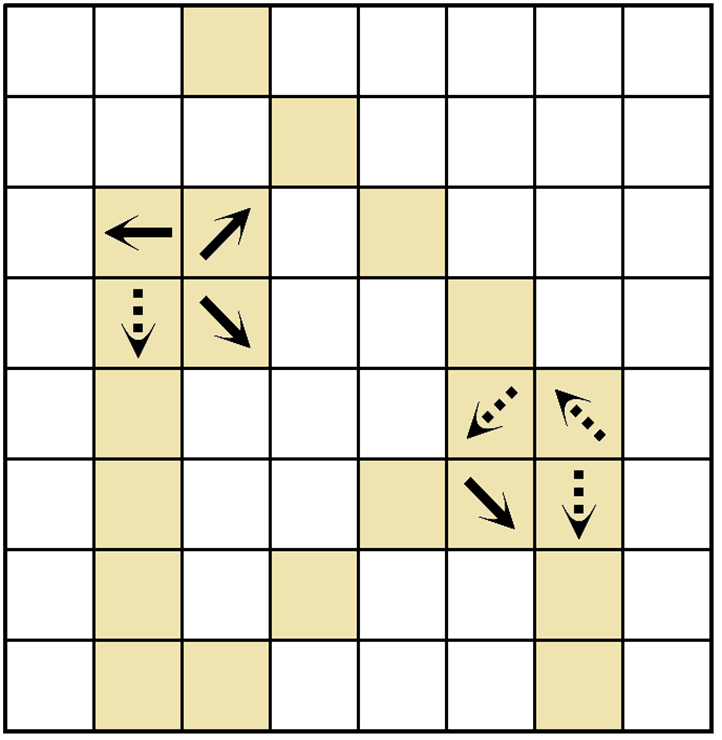 The cell in the bottom-right corner must contain a star to satisfy the arrow in R6C6. Cells R1C5 and R3C1 must also contain stars to satisfy their nearby arrows. 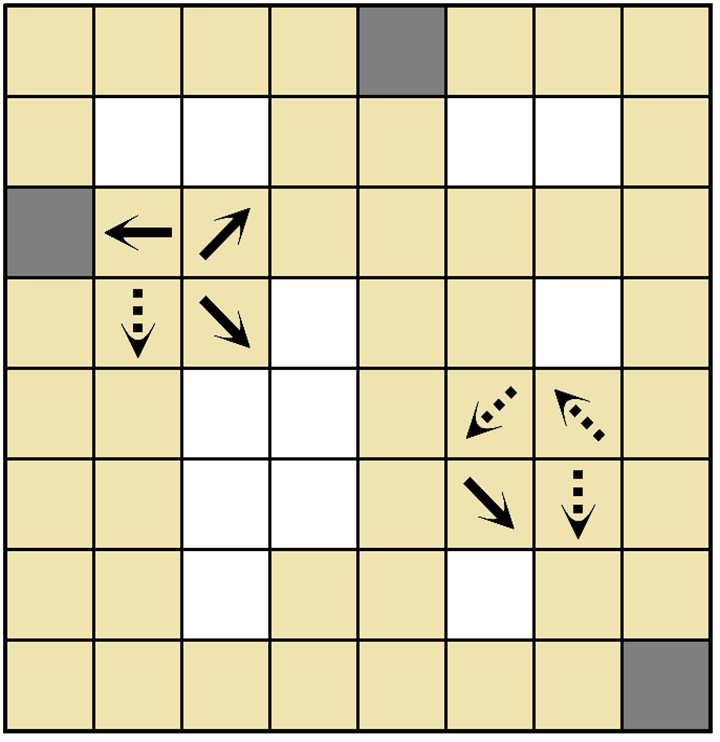 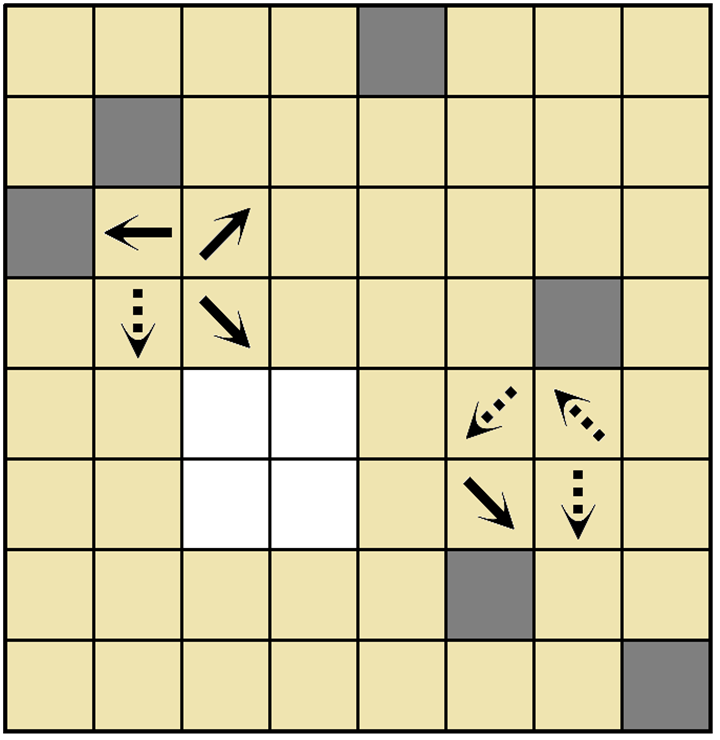 Finally, note that the arrow in R4C3 is already satisfied by the placement of the previous star, so R5C4 can be excluded, and the only two cells where the remaining two stars can be placed are R5C3 and R6C4: 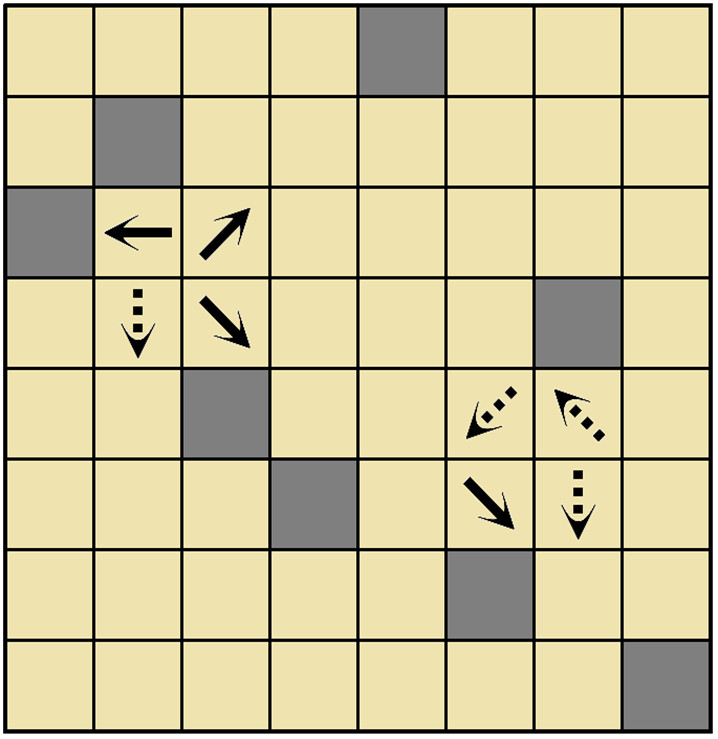 Step 1 - guess what! - is once more to exclude cells containing arrows or in line with dashed arrows. Furthermore, we can exclude the cells behind the upwards-pointing arrow in the right-most column, since the star in this column must appear above it. 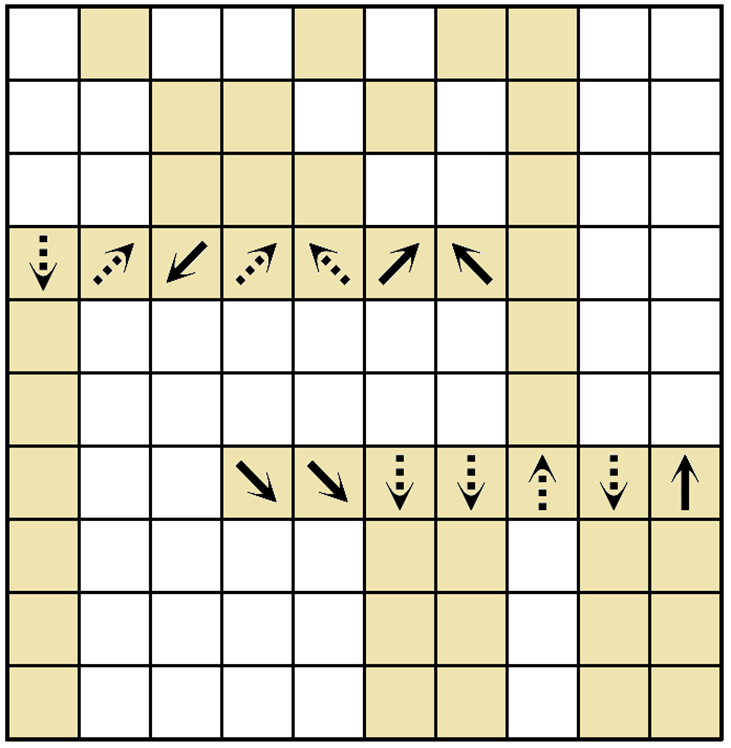 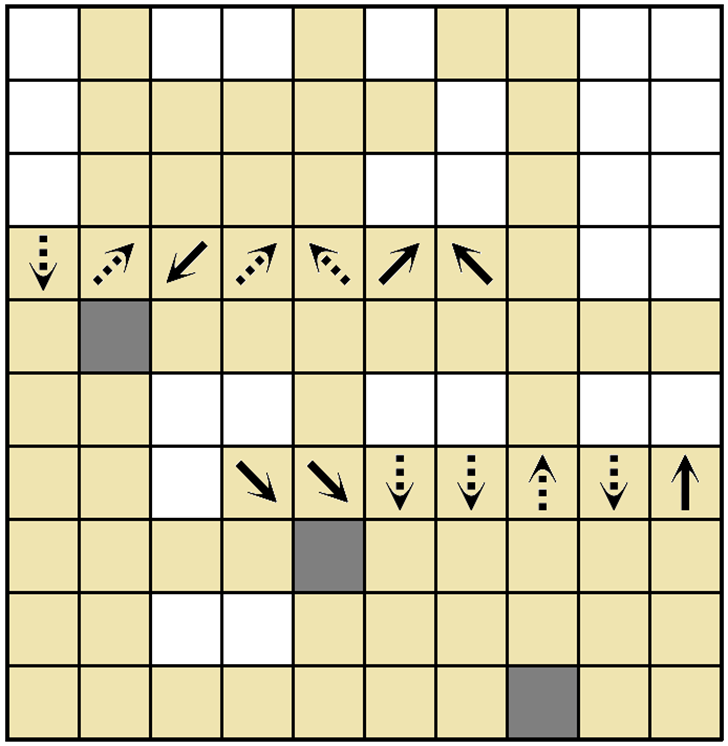 Note now that the stars in rows 1 and 3 must be placed in line with the arrows in R4C6-7 (here shaded light green). This means that all other remaining cells in these two rows can be excluded. 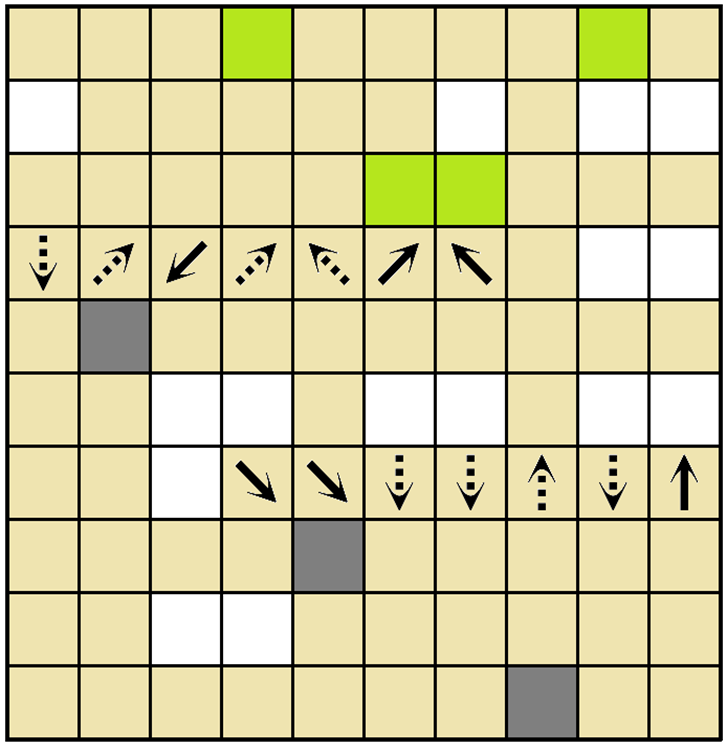 R2C1 is now the only remaining space in column 1 - it must contain a star. This leaves only two candidate spaces each in columns 6 and 7, guaranteeing that the star in row 6 must appear in one of these columns - exclude all other cells in this row. 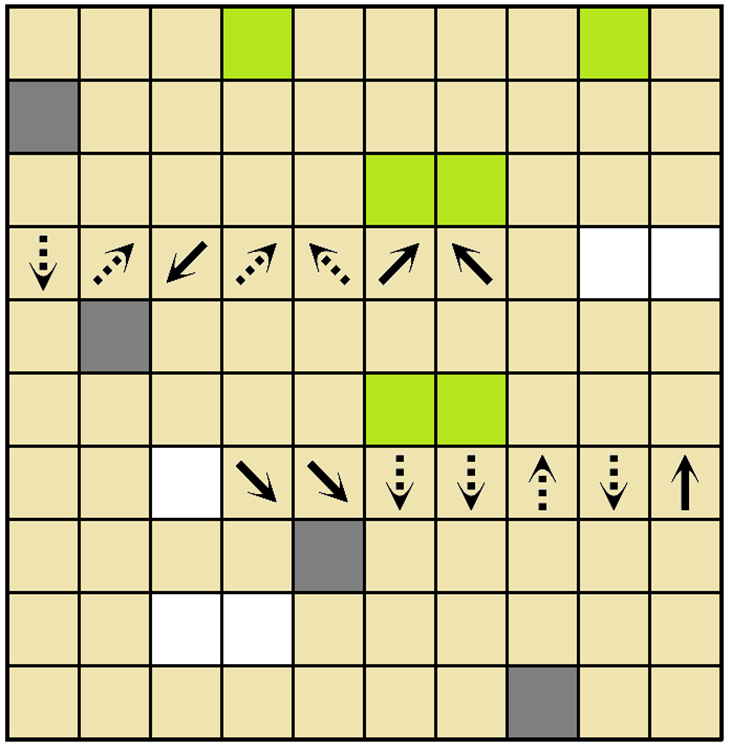 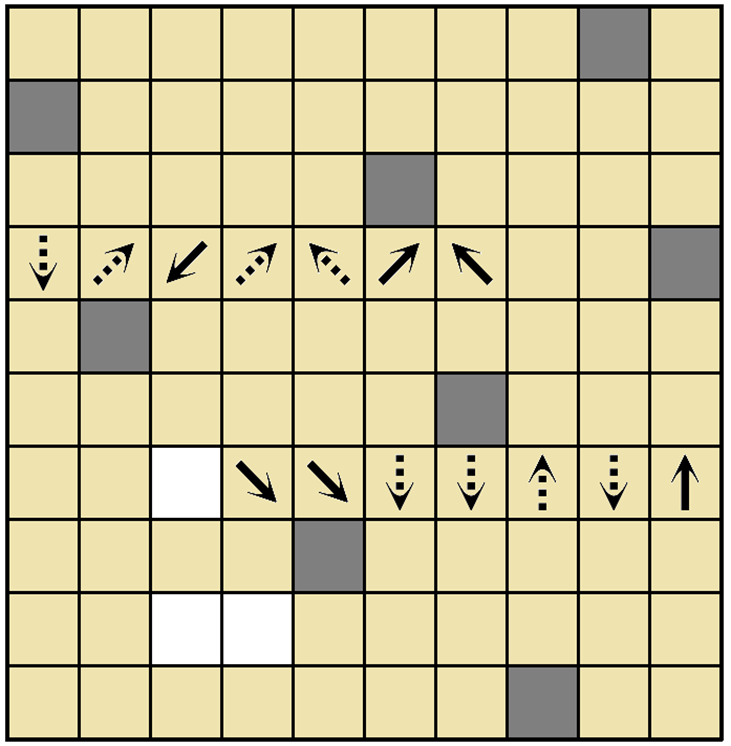 Finally, R7C3 and R9C4 must contain stars, and we are done! 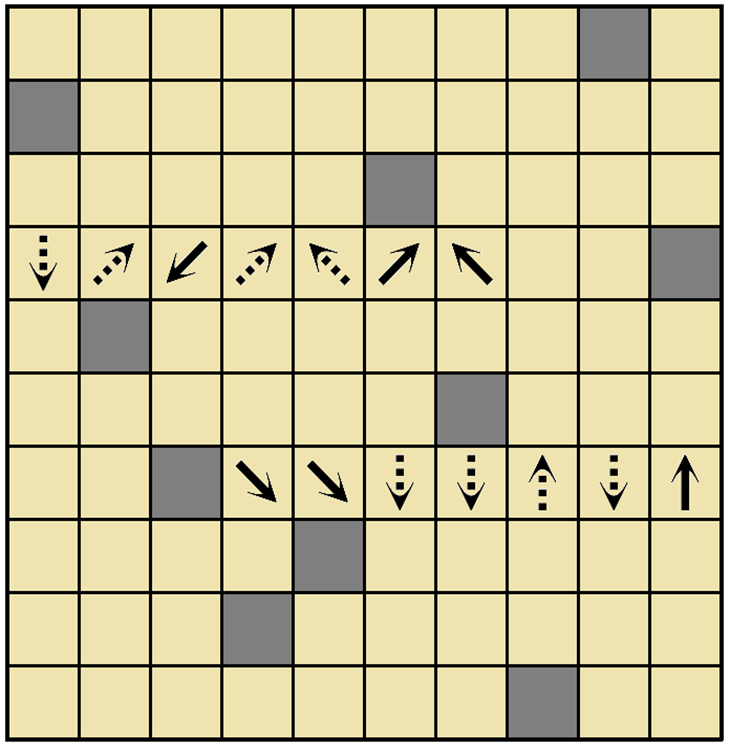 These were fun. Applying the rules usually leads to no guesswork. Here are the solutions: 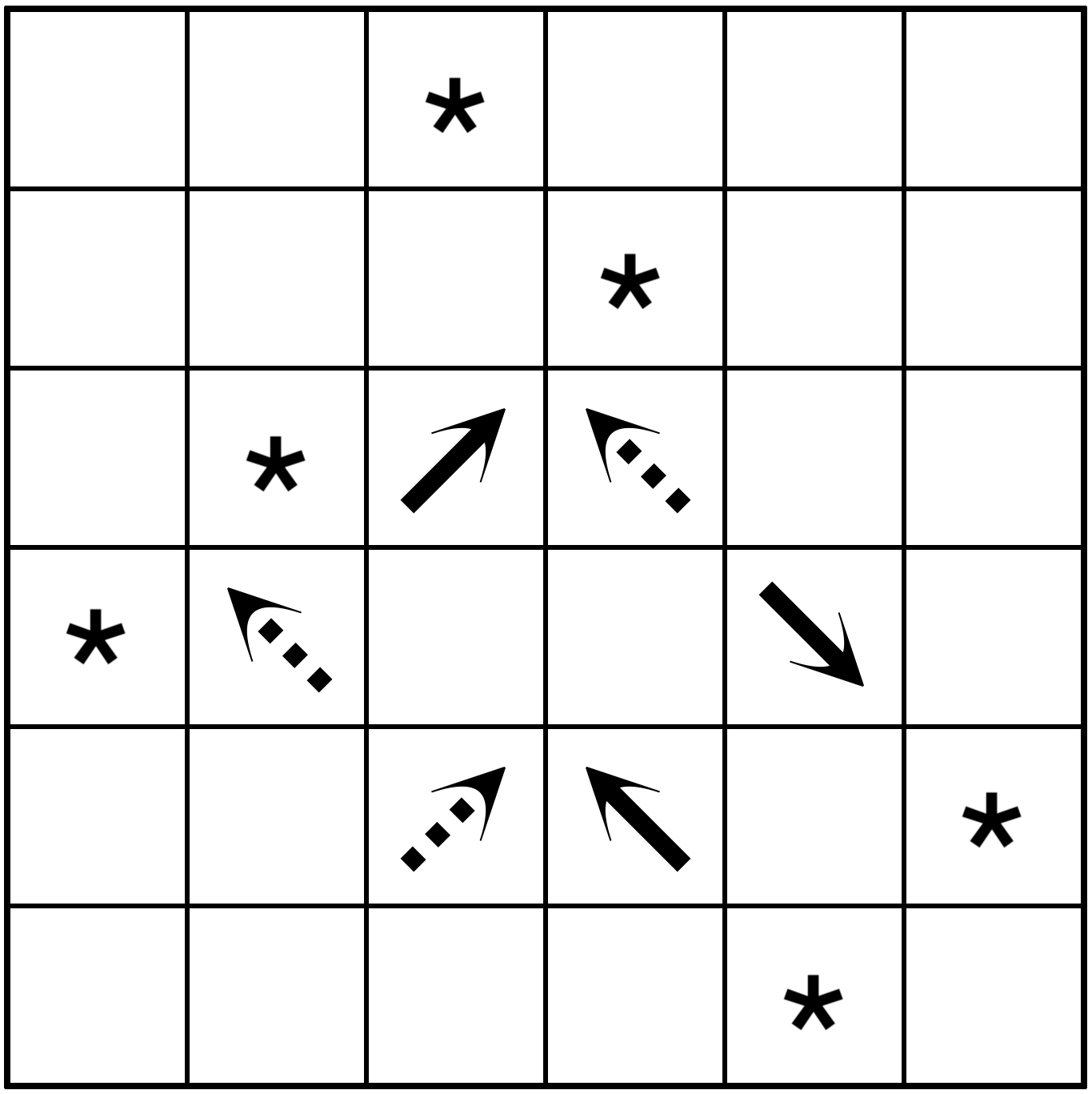 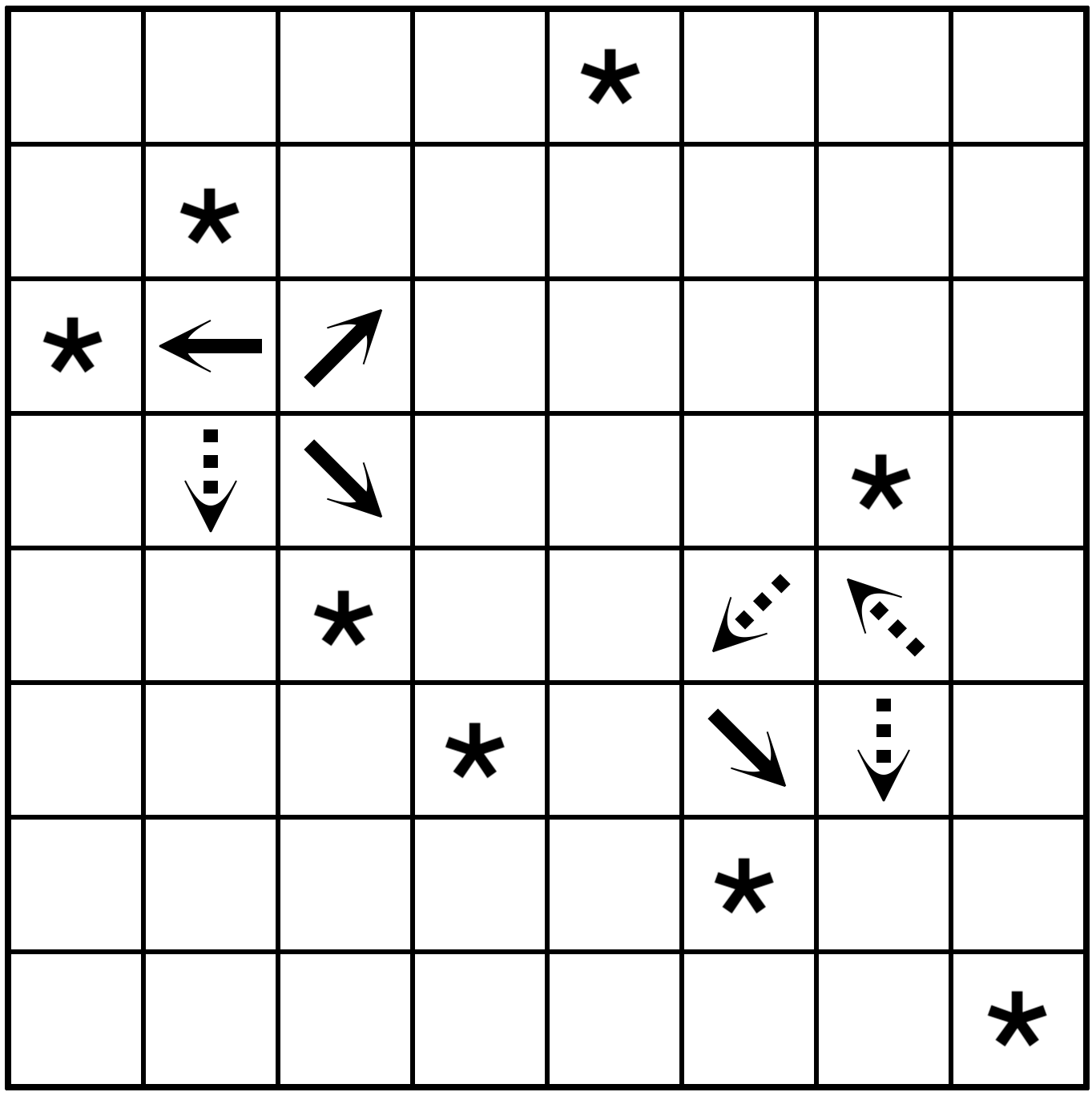 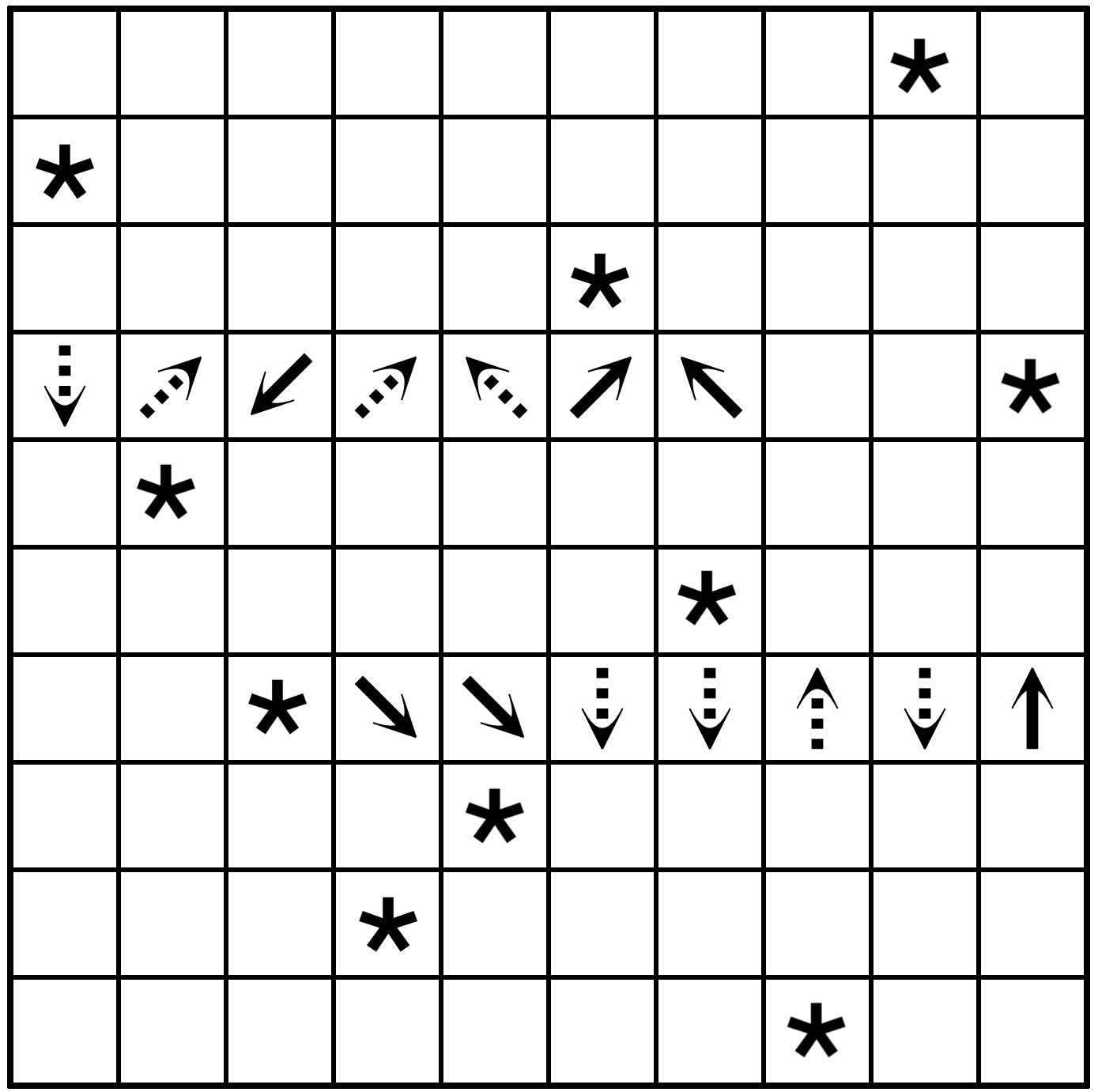