The image below is the aftermath of a secret tournament of Monopoly played here on PSE.
Akin to something that might come out of a subreddit like r/anarchychess, the board has been massively scrambled and edited due to the immeasurable amount of homebrew rules and mechanics.
The only thing more secret than the tournament itself was the prize for winning.
What is the tournament's prize? 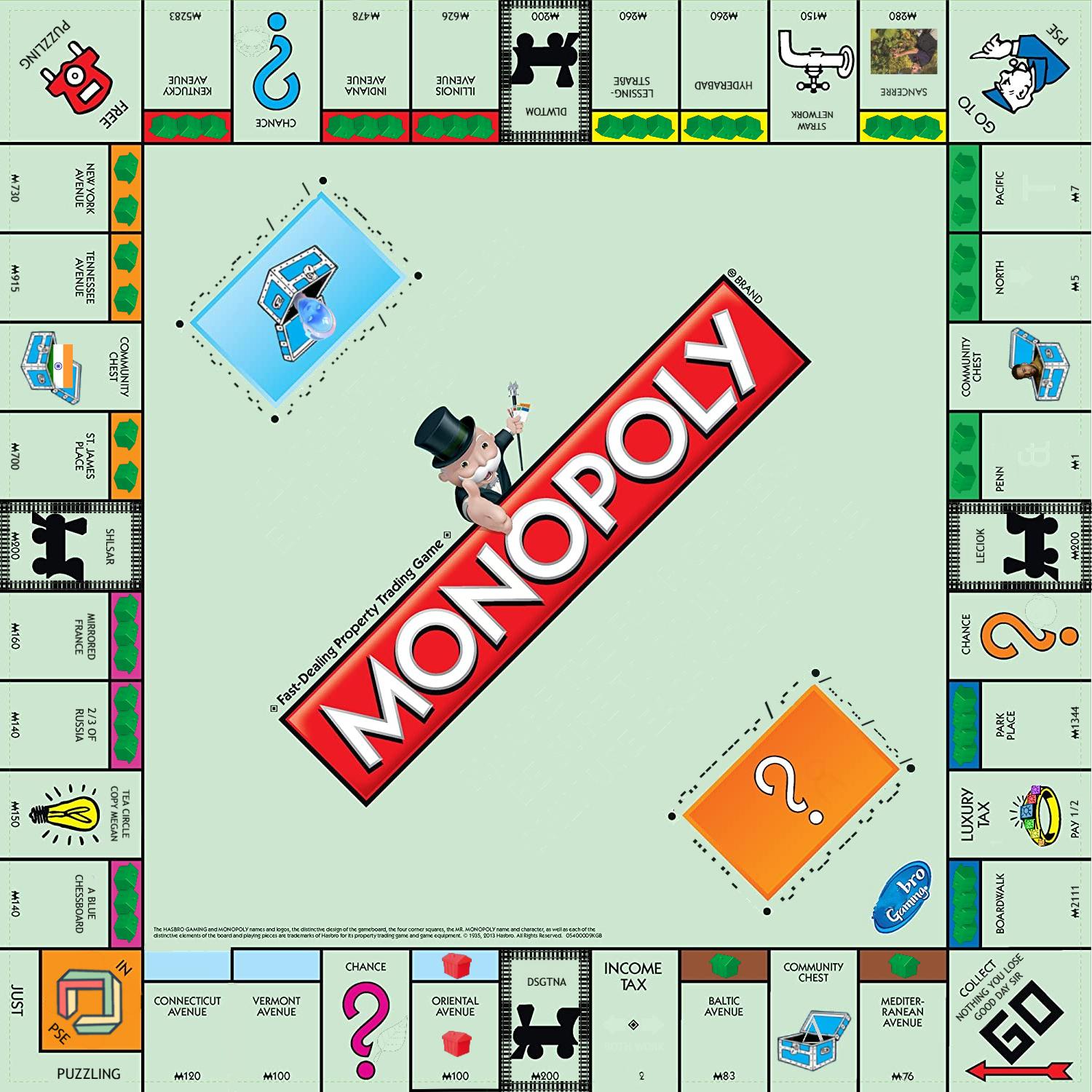 AUTHOR'S NOTES:
This story is fictional, there was no actual Monopoly tournament.
Some tags have been left out on purpose and will be added as information is discovered.
There's quite a bit here to unpack, good luck!
I'm also going to mention that partial answers are completely acceptable!
(It also helps give me an idea on where people are stuck so I can give better hints. Thanks!)

It looks like it's a bit off... center.
And maybe other places as well...

The steganography tag has been replaced with the metapuzzles tag to avoid some confusion and give a hint.

The third yellow property has been changed to avoid ambiguity.

The first yellow property has been changed. I should have double checked these ones before posting, sorry about all the changes.

You might want a best friend...
Being stuck is quite taxing...

word story metapuzzles
Share
Improve this question
edited May 25 at 14:25
WoomyRogue
asked May 20 at 18:51

The full solution (many thanks to @WoomyRogue for the excellent puzzle and hints, and to commenters @samm82, @Amoz, @Stiv, @cap and anyone I missed for contributing to the solution with their brilliant insights):

The Center of the Board:

There's a bunch of text faintly in the blank areas in the center of the board. It appears to say:
ALL SOLUTIONS ARE AN ENGLISH WORD
IGNORE THE FOUR CORNERS
BE SURE TO GO IN ORDER
ONLY USE EACH COLOR ONCE

The space for the deck of Community Chest cards is surrounded by morse code. It decodes to ANSWER IS FOURTEEN LETTERS.

The morse code around the Chance pile decodes to LOOK AT SETS OF PROPERTIES.

The railroad property spaces are surrounded by railroad tracks, which led me to believe the letters in place of their property names formed a Rail Fence Cipher. Taking them in order around the board we have DSGTNASHLSARDLWTOMLECIOK which decodes to DNDCLASSWITHGLOOMSTALKER. The D&D Class with a Gloom Stalker subclass is the RANGER.

The items in the chests around the board are: a capital Greek letter Delta, the flag of India, the singer Romeo Santos, and the character Echo from the video game Overwatch. These are all characters in the NATO phonetic alphabet: delta = D, India = I, Romeo = R, Echo = E. So this results in DIRE.

The three spaces contain faint outlines of a leaf, a crab, and a monkey, to the right of a question mark. The word that can fit in _leaf, _crab, and _monkey is SPIDER.

Luxury tax has colored gems in this order: orange, yellow, green, blue, red, purple (pink?). The price has changed to PAY 1/2, and there is a faint number 1 in the upper left hand corner of the space. The gems on this space look like Marvel's Infinity Stones, with the largest blue stone representing SPACE.

Income tax has a 2, and arrows pointing left and right with the text "BOTH WORK". There is a diamond shape in the center that is identical to two diamond shapes in the middle of the board. Those two diamonds are adjacent to the words "FAST" and "GAME", so we should take the second letter of either of those words which gives us the answer A.

The prices of these properties have changed from 60 to 83 and 76. The atomic numbers 83 and 76 represent the elements Bismuth (Bi) and Osmium (Os) respectively. BIOS

The black lines and red hotels form a Pigpen Cipher which, when read across the top and then across the bottom, spells out the word BENIGN.

The only thing unusual about these is their prices. 730, 915, and 700 look suspiciously like times on a clock. Also the signal flags in the prior property group made me think of flag semaphore, which uses red and yellow (i.e. orange?) colored flags held in different positions to convey letters of the alphabet. With arms in the position of 7:30, this signals the letter A. 9:15 signals the letter R, and 7:00 signals K. ARK

Once again the only thing unusual here is the prices. We have 626, 478, and 5283. I thought this looked like a phone number. 626-478-5283. If I look at a phone keypad and try to convert numbers to letters, I found that this phone number corresponds to the word MANIPULATE.

Sancerre is a region of France. Hyderabad is a city in India. Lessing-Straße appears to clue to Germany. F + I + G = FIG

There are a few things going on here. The names of the properties have been truncated; the prices have been changed to single digits, and there are faint images of a capital letter T, and downward pointing arrow, and a stylized ampersand.

Penn & = TELLER; North with a down arrow = SOUTH; Pacific T = ??. Taking the letter from the position indicated by the price gives THE.

The only thing changed here are the prices. We have 2111 and 1344. The prices are Tap Code representing the word FACT.

Putting it all together:

The number of green houses indicates which letter to take from the answer for that set of properties (and for the light blue properties, 1 red hotel = 5 green houses). For the non-colored property groups, we count how many of that property type appear on the board and take the letter in that position. Taking them in the order in which we first encounter them, starting from GO and moving clockwise around the board:

So the prize for winning the tournament is BRAGGING RIGHTS!

Not the answer you're looking for? Browse other questions tagged word story metapuzzles or ask your own question.

3
The desperate student
14
A Great-Aunt's Cryptic Invitation
10
Intelligent Bureau of Puzzle Solvers
6
Instead of racing I like to watch movies
26
Puzzle: Who is the winner of the Great Puzzling Trophy?
4
Eyes on the Prize
2
The Boy of Fire: Into the Stronghold
15
Note of greetingth
11
The Heart of the Matter, a Sergeant Sequence mystery (fan-fic)