How many distinct pentominoes are possible to place on an 8 x 8 board?

With integer programming, I managed to place

8 pieces, proved to be optimal

Here is my formulation. I happened to solve a similar model to solve a puzzle called One puzzle a day. Let $B$ be the set of cells in the 8x8 board, and $P$ be the set of all kinds of pieces (rotating and flipping count difference here), so I have $|P|=63$, then we need to choose a subset of $P$ and place them only by translation. Let binary variable $x_{pb}$ indicate whether the piece $p$ is placed on the cell $b$ (some predefined reference point on the piece being on $b$). Let the set $P_i\subset P$ represent all flipped and rotated version of a same pentomino, and binary variable $y_i$ indicates whether the pentomino $i$ is placed on the board, so we have $$ y_i = \sum_{p\in P_i} \sum_{b\in B} x_{pb} $$ and the objective is to maximize $\sum_i y_i$.

That is all constraints we need.

I solved this completely by hand. 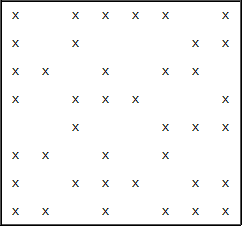 Here is a clean proof of its optimality. No computer is needed. Mere pencil and paper suffice.

Expand each pentomino by adding little right-angled isosceles triangles with area 1/4 as follows:

Here is an example (with added triangles yellow in step 1 and green in step 2): 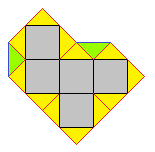 Now expand the 8×8 board as well in the same manner, which adds 15 little triangles to each side. The expanded board has area $8×8 + 15 = 79$, but at least one of the added triangles next to each side of the board will not be covered, so the actual covered area is at most 78. Hence 9 distinct pentominos cannot fit.

An equivalent counting method is to count the cell edges instead of area. Each pentomino already has 15 or 16 cell edges, and between each pair of adjacent cells along its perimeter we can add 1/2 edge sticking out, because that goes at most halfway to any other pentomino. In total we would get at least 17 edges per pentomino except 16 for the X-pentomino, which corresponds to 8.5 area for each pentomino except 8 for the X-pentomino.

I initially did not mention this approach because the area equivalent is a bit easier to understand. However, I have decided to add it in, because it is much easier to write a program that uses this for a branch-and-bound search that counts the total edges plus the (necessary) losses so far. This makes it easy to prune most branches of the search. We even get a reasonable heuristic for branch-ordering, namely to first try placing the next pentomino to minimize the total edges+loss so far. 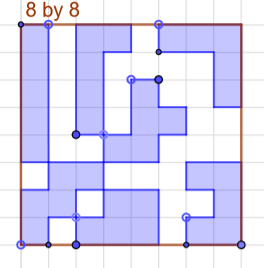 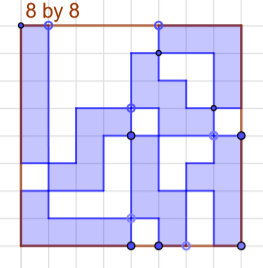 There is an obvious upper bound of

twelve (the total number of distinct pentominoes, and $12\times5$ is still less than the number of squares on the board),

but this is nowhere near achievable given the restriction that pentominoes are not allowed to touch each other orthogonally. This means that

Because of this, I'm pretty sure the number I managed above is optimal and it's not possible to place more.

10
Fitting pentominoes inside a 10x10 grid
3
How many distinct pentominos can be placed on a 8×9 board?
2
A solitaire Blokus problem on a rectangular board