Yin-Yang is a puzzle where one needs to fill each cells with either black circle or white circle following these rules: 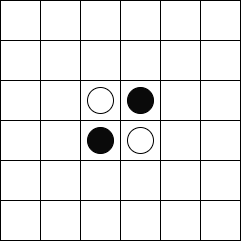 How can I prove that this pattern will always breaks the rule number 1 anywhere in a grid?

Here is what I have tried so far:

If you are willing to accept as a known result that K5 (i.e. the complete graph with 5 vertices) is non-planar (i.e. you cannot embed it into the plane, where each vertex maps to a point, and each edge maps to a continuous path connecting the endpoints, and no two of these paths intersect except where they meet at endpoints), then it is easy to answer your question.

Take the 4 dots as vertices and connect each adjacent pair by an edge. Add a 5th vertex in the centre and connect it to the other 4 by edges. Observe that if the puzzle has a solution then we would be able to add 2 more continuous paths to finish the embedding of K5: 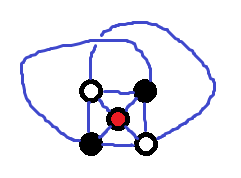 Thus the non-planarity of K5 implies that there is no solution.

This kind of problem can very often be solved by a judicious application of well-ordering on ℕ, which informally says that for every property Q on ℕ that you write down, if some k∈ℕ satisfies Q then some minimum k∈ℕ satisfies Q. Well-ordering on ℕ is in turn equivalent to ordinary induction on ℕ, over PA−. (You don't need to know about PA−, but see here if you are interested to know the axioms of PA− as well as the deductive rules needed.)

Using well-ordering on ℕ is in some sense a special case of using the extremal principle, although actually they are both equivalent. Either way, the idea is that if we have a finite set S of objects each with some sort of size (e.g. length), then we can extract more information by looking at a member of S that has minimum/maximum size (which is guaranteed to exist by well-ordering). So here I will give a completely discrete proof based on this technique. 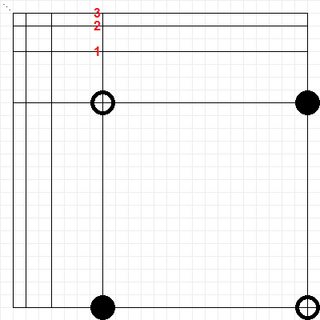 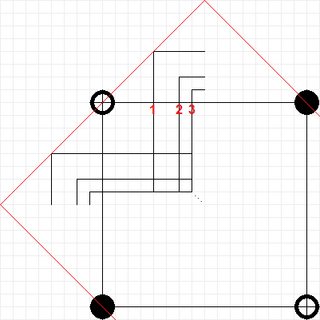 The above outside-in transformation allows us to turn any pair of paths that follow the grid lines into a pair of rectangular paths that stay within the central diamond. Moreover, if the original pair satisfies the desired condition (i.e. they do not intersect and one path connects the black dots and the other path connects the white dots), then so does the transformed pair.

So from now on we only consider pairs of paths following the grid lines of some finer regular grid that satisfy the desired condition and stay within the central diamond.

I claim that no such pair exists. If it does, then by well-ordering some such pair (P,Q) has minimum total length. Each path can be viewed as a sequence of moves where each move is one of: F (go forward 1 unit) / L (turn left / R (turn right). We can assume an initial direction at the start of each path, so that the path itself starts and ends with F. Note that there is no (consecutive) LL or RR in any of P or Q, otherwise we can use the following mappings to shorten their total length: LLL↦R / RRR↦L / FLLF↦LL / FRRF↦RR.

There are two cases.

Let V(0) be the left side of the central square, and V(k) be the k-th vertical grid line to the right of V(0). Let n be the number of vertical grid lines between the left and right sides of the central square. For each k∈[1..n+1], let p(k) be the lowest point that P reaches on V(k) (which exists by well-ordering), and similarly let q(k) be the highest point that Q reaches on V(k). We can easily check that, for each k∈[1..n], if p(k) is above q(k) then p(k+1) is above q(k+1), since P and Q do not intersect. (I will leave this bit as an exercise.) Therefore, by induction, p(n+1) is above q(n+1), which is impossible because p(n+1) is no higher than the bottom-right dot and q(n+1) is no lower than the top-right dot.

By well-ordering, let U be a u-turn that is in either P or Q and has minimum size. This choice of U is the crucial idea in the entire proof. Note that the moves just before or after U must both be F. So the path at U looks like this:

where | and − denote the straight segments, and + denotes the turning points, and · denotes a grid point that is 'just inside' the u-turn. Let S be the set of these grid points 'just inside' U. I claim that neither P nor Q goes to any grid point in S. Why? If it does, then there are two cases:

Therefore neither P nor Q goes to any grid point in S. Hence we can remove the F just before U and the F just after U, shortening the path containing U but preserving the fact that P and Q satisfy the desired condition. This contradicts the definition of P,Q.

Therefore, no pair of paths in the grid satisfies the desired condition.

For interested readers, this technique can be used (in conjunction with a compactness argument) to prove any of the related theorems, including non-planarity of K5, the Poincare-Miranda theorem, Brouwer's fixed point theorem, ...

This fact is totally relevant to this post because people very often cite one of these related theorems, especially non-planarity of K5, in order to prove the kind of result we want here. What most people do not realize is that all these related theorems are highly non-trivial to prove, in fact even more difficult than the result we want. Since I gave here a purely discrete proof of the result we want, this ought to naturally invite the question of whether the related theorems are 'significantly' harder. The answer is no; the same technique plus a standard compactness argument is enough to easily prove those related theorems. This tells us that the proof I gave here is actually a proof of the core of the topological phenomenon we are interested in here, despite being purely discrete.

Not the answer you're looking for? Browse other questions tagged mathematics logical-deduction grid-deduction or ask your own question.