Present and future – A letter from Gladys 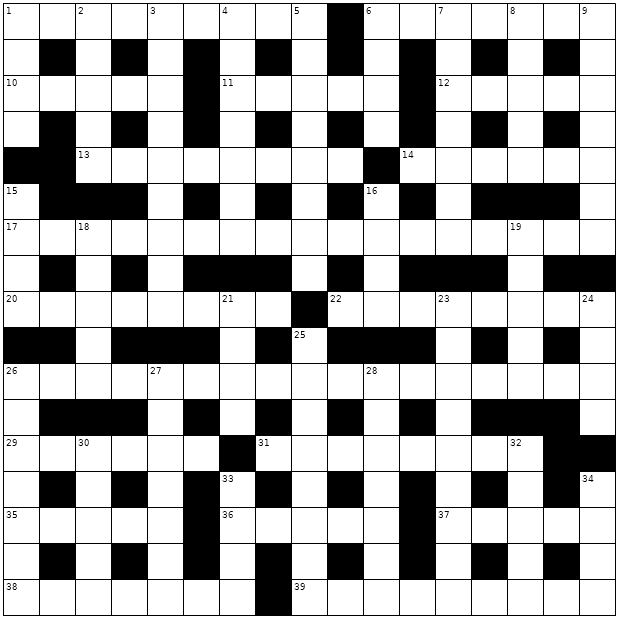 Letters from Gladys are geography-themed standalone crosswords. Each puzzle has five thematic answers, which are places, sights or landmarks in or around a certain location (in this case, an island). Each thematic answer is notable enough to have its own article in the English Wikipedia, although not necessarily under the same name that is used here. The goal is to fill the grid, identify the thematic answers and guess the name of Gladys’s destination, which is not indicated in the grid.

How have you been? I am in another exciting place I can’t wait to tell you about. This trip, I have visited the site of an important future city as well as a luxurious capital of today. I have seen schools of barracudas, climbed rather high up a mountain slope, and watched adorable babies just hatched from tiny eggs. Can you guess where I am?

Across
1. Dear onetime lover: I have to follow trumpeter ladies? (9)
6. A quest designed to come after game's final levels (7)
10. Chairs for bears (5)
11. Drink rum regularly to get power of attraction (5)
12. Learn to like part of Michigan (3,2)
13. High point produced in a UK lab (8)
14. They say part of Pakistan committed crimes against Islam? (6)
17. Capital area brand was being mismanaged (6,4,7)
20. Large zebras lie restlessly, not getting a bit of repose (8)
22. One who inspects a quintillion quarry workers? (8)
26. Maybe Recep Tayyip Erdoğan collects flower ornaments after Russian network secures parking area for wildlife reserve (6,7,4)
29. Pair of ruffians following leader of Ordos captured hero in sci-fi film having no sequels (3-3)
31. Sean, quit breaking museum pieces! (8)
35. Visitor wanting phone call thrown out by judge Brown Jackson for writing in a foreign language? (5)
36. Theatre personnel evicted heroin addicts (5)
37. Donald Trump is not allowed to do this little to break up tango couple (5)
38. Asian man's best friend – playing with the uzis, he suppressed every 1 down (4,3)
39. Theodore's gotten into sound systems – he's finally getting satisfaction (9)

Down
1. Reflection of Henry, being engaged in employing environmentally friendly practices (4)
2. Backup strategy #10 to get shipmaking material? (5)
3. Future city described by present dealer during an escape northwards (9)
4. Hot copper conductor is a source of distress (7)
5. People encouraging self-endangerment – perhaps Len dancing with bears? (8)
6. The name of an aunt from Kansas is written on Gladys's statuette (4)
7. Bundy in goverment's shackles, forever (7)
8. Packed in container: Game animal rarely seen in the wild (5)
9. PADI's put out article describing diving destination (7)
15. Flyer turned up invisibility cloaks (4)
16. Content restricted to adults after indiscreet bears exposed fronts to horny individual? (4)
18. National socialist reich's top overseer's title (5)
19. Sokovian sorceress waving a wand (5)
21. City in war-torn country is against being captured by Tyler (4)
23. Like Marie Antoinette with "Let them eat cake, and cooked squid to me!" (9)
24. Drink containing anise, a bit of rum and a kiwi peel (4)
25. Entrance to Frank and Moon Unit's region with many famous artists (8)
26. Counsellor together with king in the process of making ruling councils (7)
27. Perhaps member of the Workers' Party of Korea felt its corruption (7)
28. Unbelievably salient tool for a woodworker (4,3)
30. Briton's back, repeatedly entering the European Union over Irish border, showing weariness (5)
32. Maybe Astrid Lindgren's editor is enthralled by three cardinals (5)
33. Combat sport has lost its 11 across (4)
34. American people's institute studies bears (4)

Gladys is on the island of: 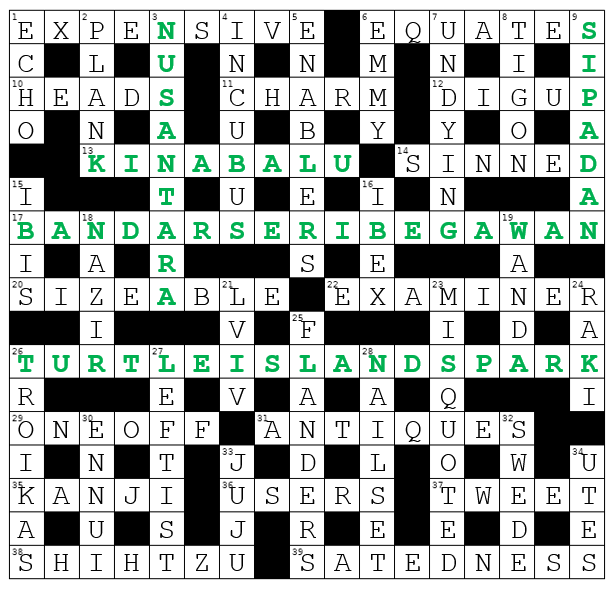 As for my favourite clues, I love the definition part of 38A (had me scratching my head for a while, then laughed out loud when I spotted it!), 2D is clever, and 31A is short, sharp and very funny!